The Battle of Thirlwall castle

This is a guest post from Phil (AKA Norman D Landings on TMP!)


Thirlwall castle stands where the  Tipalt stream flows from its steep-banked, wooded valley into the gently sloping fields of Greenhead.  Despite its name, it was never considered anything more than a fortified hall, or Bastle-house, and guarded nothing more important than its own modest holdings.  But murderous rivalry between the houses of Neville and Percy has spread across Tynedale, and the time has come for Sir Percival Thirlwall to declare for one side or the other.  Both sides have designs on the fortified outpost, and would welcome the levy of Greenhead into their ranks. 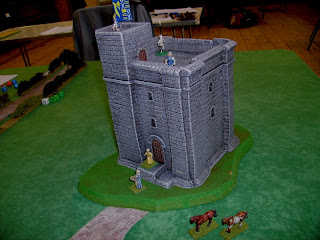 The Percies have entrusted Hugh de Lacy with the task of bringing Thirlwall into the fold... at sword-point if necessary.
De Lacy's record to date has been creditable - but not distinguished - characterized mainly by keeping enemy forces tied down, allowing more capable Captains to win renown.
He approaches from the west, marching from Gilsland. 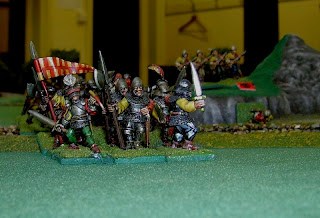 De Lacy has brought his entire retinue - a strong core of armoured billmen, somewhat outnumbered by missile troops.
However, not nearly enough of these are the lethal longbowmen - De Lacy has had to include every handgunner and crossbowman he can find, and few of them boast anything more than an arming jacket for protection.


As De Lacy comes within sight of Thirlwall, his heart sinks as he sees the red lion banner of Sir John Strangeways, a seasoned veteran, and perhaps the Neville's most able Captain!
Strangeways' retinue is slightly smaller than De Lacy's... but based around a solid core of battle-winning longbowmen. What's more, every man boasts some degree of plate armour.
Approaching from the South-east, from the town of Haltwhistle, the Neville forces are much closer to Thirlwall than de Lacy.


But the castle door remains barred - Thirlwall has decided not to commit until he sees which way the wind is blowing, and the two retinues must decide the issue between them! 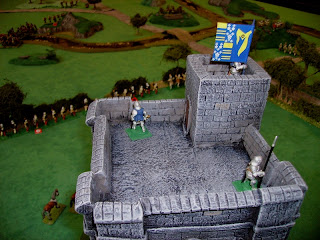 De Lacy initially makes a determined advance in column up the road, heading for the bridge in the centre of the table. His archers, crossbowmen and gunners are directed into cover of reverse slopes and woods as the column advances. The lightly-armoured archers will get the worst of any exchange of arrows at this stage, so the intention is to keep them out of harm's way until the men-at-arms and billmen are in position to engage. 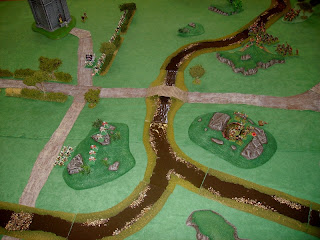 trangeway's deployment is straightforward - the open fields around the bastle-house allow him freedom of movement to form line-of-battle and to do what he does best: mass his archers!
North of the road, his heavily-armoured gunners, supported by a party of sergeants-at-arms, take up position on the reverse slope of a hill. 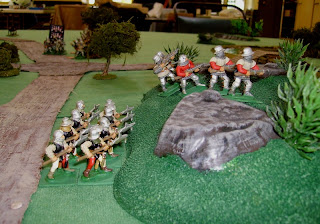 De Lacy's resolve doesn't hold for long.
Wherever he looks, he seems to see flaws in his plan.
He has sent his gunners too far out to the flank to provide supporting fire... he calls them back and sends longbowmen to take their place instead.
His crossbowmen might have a better field of fire from one of the hillocks north of the road... he orders them out of their position in the woods, but as soon as they clear the treeline, Strangeways'  longbowmen rain long-range shots on them, killing one and wounding another. First blood to the Nevilles! The crossbowmen immediately retreat back into the woods. 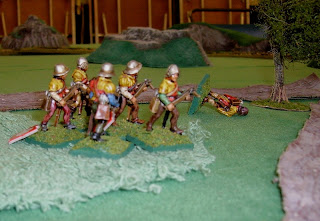 De Lacy now loses confidence in his attack. That bridge is horribly exposed, and ALL Strangeway's archers are going to have line-of-sight on anyone crossing it.
His own support fire will be at perilously long range, and  across intervening terrain.  And there's no guarantee Strangeways will obligingly stand and fight!  De Lacy imagines his force being lead on up the road, under an arrow-storm, until the last man falls!


Without a properly formed alternative strategy, he orders his column to incline right, to the south, off the road and behind the cover of a rough, craggy hill.  It will at least, he reasons, keep his men out of enemy bowshot while closing the distance somewhat.


The short delay this causes is a gift to Strangeways. His men reach the thick hedgerow which forms the boundary of Thirlwall's farmed fields, and spread out to man it.  This is the most advantageous terrain feature on the field - big enough to shelter the entire force, providing a cover save against missile fire and counting as a defended obstacle in close combat.
It's also positioned, like a wall, straight across De Lacy's line of attack! 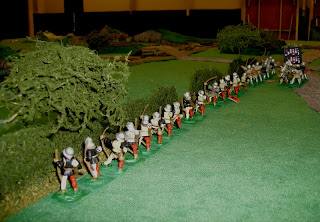 Meanwhile, to the north of the road, De Lacey's longbowmen and Strangeway's gunners step up to the crests of their respective high ground, and exchange fire! 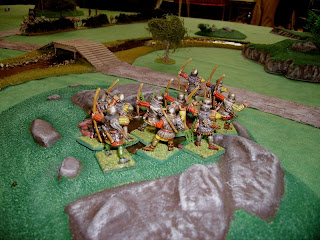 There couldn't be a worse mismatch for De Lacy's men! These are his only armoured missile troops - and they're facing gunpowder weapons, which ignore  armour. Several are killed or wounded in the initial exchange, while their own arrows rattle off the gunner's plate mail. Indeed the gunners are so confident in their armour that instead of withdrawing to reload, they stand out in plain view, ignoring the Percy arrows!
De Lacy's archers soon withdraw downslope, leaving all territory north of the road in Neville hands. 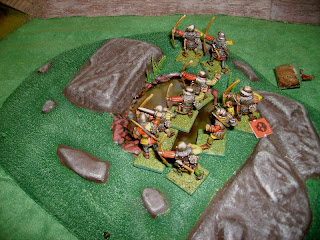 De Lacey has to admit that while his deployment is far from ideal; it's as good as it's going to get.
All four of his missile units - the archers newly withdrawn from the high ground, the crossbowmen far to the rear, the second unit of archers on his right flank, and his gunners on the craggy hill - can now shoot at the defended hedgerow.
His main force is as close as they can get to the hedgerow without breaking cover.
Strangeways would be mad to give up his position. If the affair is to be decided, the nettle must be grasped.


The order is given, and, labouring hard under the weight of their armour, the three groups leave the cover of the hill and begin to splash clumsily through the shallow river Tipalt. 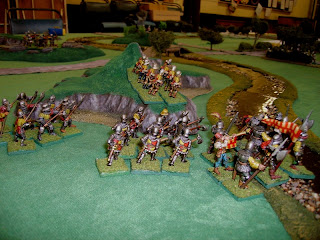 Strangeways has all the time in the world to coordinate his men's fire.  He concentrates on  the lead group, where Hugh De Lacy's banner flies.  It takes several rounds for the desperate attackers to close the distance, but this time they have the advantage of armour. Hit after hit strikes home, and several men are wounded - but no one goes down.
Meanwhile, with every Neville bow aimed at the men-at-arms, De Lacey's archers can forget their lack of armour and fire at will.  Bullets, arrows and shafts pepper the hedgerow.  The cover save offered by Strangeway's position means this barrage is not half as bad as it could be... but it means when the attackers reach the hedgerow, they'll be fighting wounded men!
De Lacy and his group hurl themselves at the hedgerow, hacking through it at the Neville archers... but they have the advantage of a defended obstacle, and the melee is indecisive.  On successive rounds, the second, then the third group of Percy men-at-arms charge the hedgerow. Now, the entire position is engaged, with men stabbing at each other through the thicket.  The fight begins to turn De lacy's way, and as Neville archers fall, Percy men-at-arms begin to push through the gaps they leave.
(It's not one-sided by any means - one Neville cur, finding himself on the 'wrong' side of the fight, tries to sneakily stab de Lacy's unarmed Herald!  Fortunately, the trumpeting fop turns out to be handy with a dagger, and lives to blow another fanfare - it's a triumph, Herald!)Strangeways calls for his gunners and billmen to pull back and support his centre, then he and his knights esquire throw themselves into the melee. They fail to turn the tide, but their intervention allows some of the surviving longbowmen to pull back from the fight. 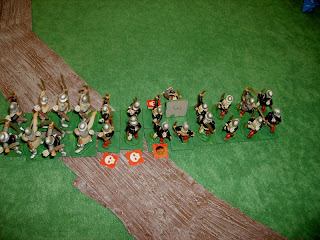 As the recalled Neville gunners and billmen march to join the fray, every missile weapon in the Percy ranks turns on them.  Even with their costly Milanese plate, weight of fire takes its toll, and the gunners are satisfyingly mauled.


Strangeways takes stock. The melee is not over by any means, but De Lacy's retinue have numbers on their side, and every one is armed and armoured for close-combat.  The fight has been unusually bloody, because not a single unit on either side has failed a morale test and withdrawn. Even if Strangeways billmen join the fight in time, they can only even the balance, not tip it in his favour.  The best he can hope for is that both sides will grind each other down.
And when that happens, the Percy's longbowmen, gunners and crossbowmen will be left unopposed on the field.


The mood changes, and Strangeways' men begin backing off where  they can, and calling for quarter where they cannot.  De Lacy's exhausted troops are content to let them go.
Sir Hugh de Lacy will enter Thirlwall as the victor of Tipalt field, and Sir Percival Thirlwall's support is secured for the Percy cause!


( I was not involved in this game as I was working!- I got in for half and hour and took a few pics! - Phil did this write up for me - well done you!)