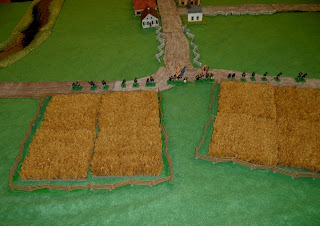 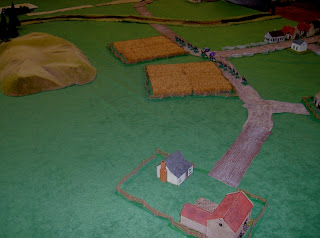 The initial setup had a single Federal regiment in skirmish order, screening the main Union positions behind, in a town, with a camp to their left, and a weapons foundry to their right 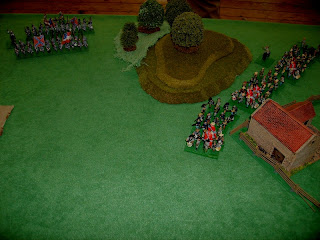 The Rebel forces appeared in a surprise attack to the pickets front. Their plan was to launch a concerted assault on the Union camp, then move on to the town. The movement dice prevented the right hand brigade moving at all, whereas the centre columns moved 3 times in their first move! 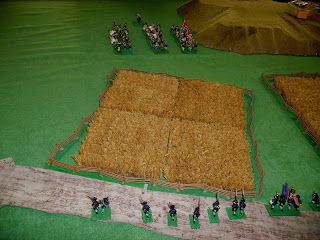 ...The left flank brigade crawled forward, despite only facing the picket regiment... 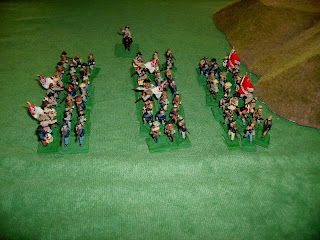 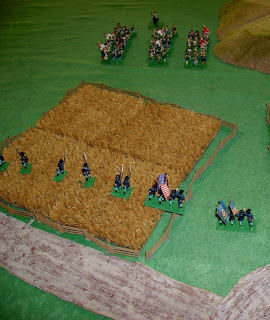 ..until at the end the union skirmishers advanced to say Hallo! 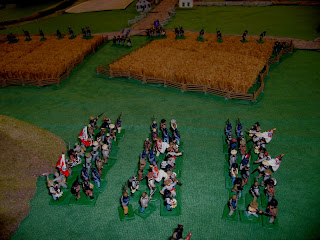 On the rebel right, facing the camp, the Rebels advanced in a long snaking column... the right hand brigade, despite being joined by the Divisional commander still steadfastly to move! 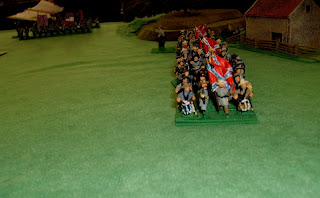 In other circumstances this would have left them dangerously exposed.... 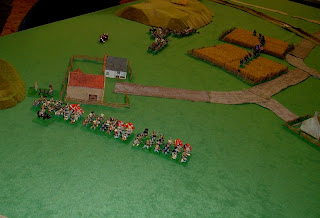 ..But the Union generals had been taking tea at 57 Acacia avenue, biding their time!

With the first shooting from the picket line though, the Generals moved rapidly to their brigades. The centre brigade got a great dice roll and in 1 move got all his regiments into line behind the pickets. 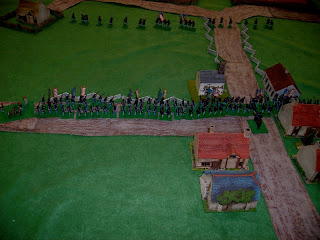 ..Who, having been finally engaged by the ponderous brigade facing them, fell back towards the town. 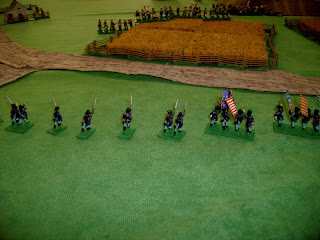 Near the camp, the cenral brigade deployed from column of march into a column of regiments, and neared the camp...but where were the blue-bellies? 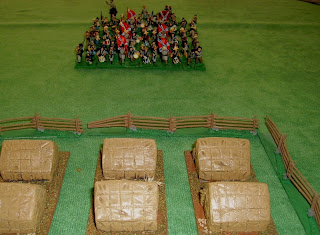 The rebels marched into the camp to find a single regiment deployed hastily into line on the road. The Rebels took serious casualties in the ensuing firefight. 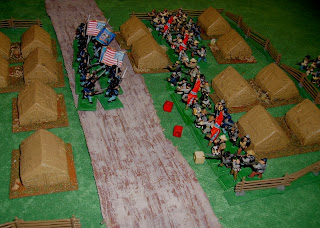 ...At this juncture (Finally!!!).. the right hand brigade advanced very quickly in support of the attack on the camp! 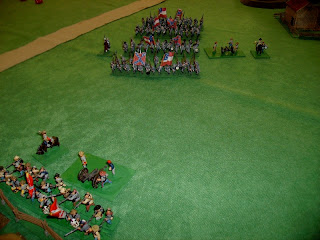 Back in front of the town, the Rebels slowly pushed through the cornfields, their front regiment being bogged down in a firefight with the picket regiment. 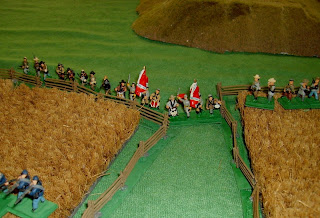 At this point, the unengaged Union forces from the foundry were seen moving to cross the stream to potentially threaten their flank. 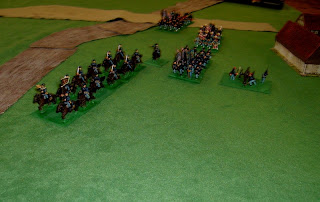 In the camp, more rebels moved up, but took heavy casualties - they were now being enfiladed by Union artillery from the town, which having got in position in 1 turn, inexplicably had refused to deploy and fire at this juicy target for the next 2 turns! 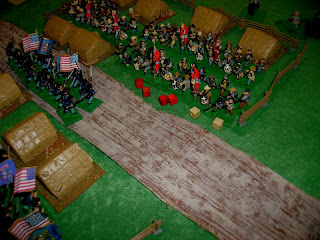 The first Confederate regiment disintegrated under this combined fire. 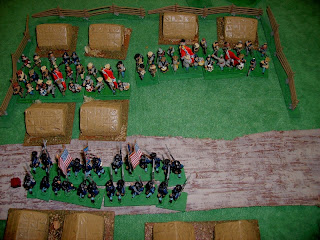 To their left, the picket regiment was taking heavy casualties from the advancing Rebels, but did not break... 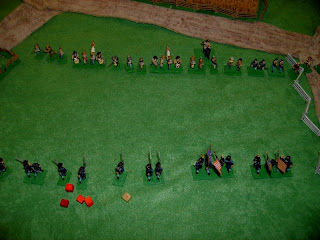 ..Which allowed the Union force in the town to redeploy to face the left where the Rebels were moving to outflank them. 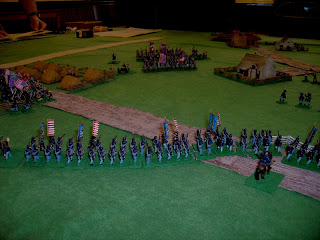 In the camp, meanwhile, the first Union regiment also disintegrated under the Rebel attack, despite the remaining 2 Federal regiments joining them fighting the Rebs at bayonet point. In the end, only one fresh Federal regiment remained, facing off against two battered Rebel ones. 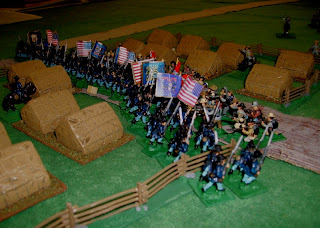 With the belated appearance of the 'foundry' brigade in the rear of their position, the Rebels decided to pull out and retire at this point, the battle was over. 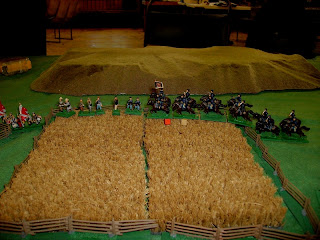 ﻿
So - what of the rules? - My feelings were that it is a forgiving system, and esentially quite straightforward to play.
I was aware that we were playing the basic rules and not the advanced ones, but I did have some reservations about the systems used;

(1) I felt the die rolling to move was far too arbitrary. No plan of battle can survive first contact with this die rolling!-- My troops felt 'Jerky' - either moving very fast or not at all, I didn't like this, and I didnt feel it was very realistic - I always feel in real battles, troops are sometimes hard to get going, but once moving, they will not stop without reason--but once stopped, are hard to get going again!
If this was what the rule writers wanted, it could be more simply done with WRGs PIP dice surely!

(2) This is a system based on D6s, and to get the effect desired, has a modified'To Hit' dice, followed by 'Saving throws' for combat, I do much prefer a single modified die roll, even if you have to throw a different die type to achieve this.

I am still, however, fairly positive about the rules though, and would not wish to condemn them on the basis of a single game!
The writers do suggest making your own modifications if you dont like something, which I applaud!
Posted by Herkybird at 22:37