Today we got my cardboard Triremes out again to try the provisional rules I am writing for them. Since last game, I sorted out ramming and shearing attacks.

Lawrence had 4 Triremes, in a tight formation. 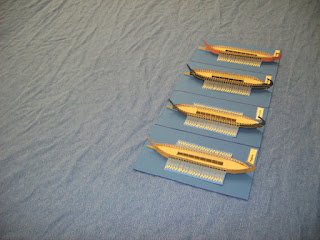 The play sheets and manoeuvre templates, modified after last game. 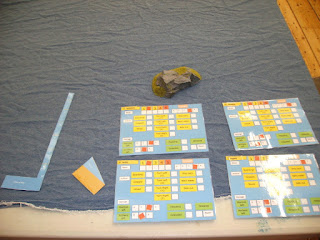 Phil had 4 Triremes to face Lawrence. Oddly he started with the name slips on the ship forecastles!- his ships were in a more open order than Lawrence's. 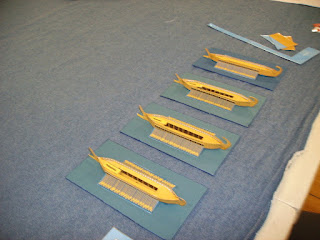 Phil advanced at a high rate, tiring his crews early in the game. Lawrence turned his ships obviously trying to outflank Phil's ships. 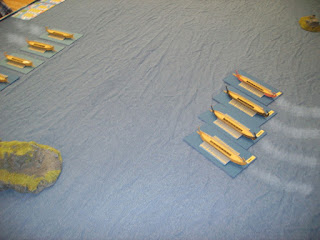 It became clear that Lawrence was not going to get round the flank easily! 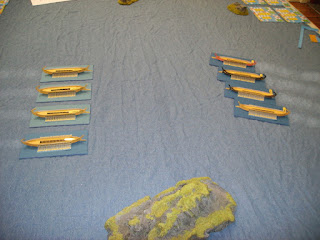 Phil now shipped his oars, and diced to get his crews fresh again. 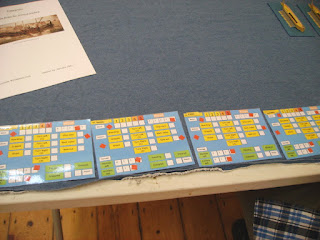 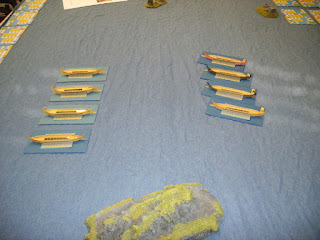 It would be interesting to see how the lines met, Lawrence's left looked vulnerable to a ram attack but for Phil resting his crews. 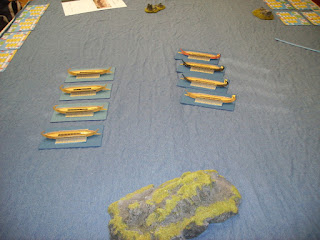 As the Marines and archers swarmed on deck, Lawrence turned sharply, with his ships going to board rather than shear (Phil had no vulnerable oars anyway!) In the rules I had allowed marines to board stationary ships in contact without grappling, this was a mistake! 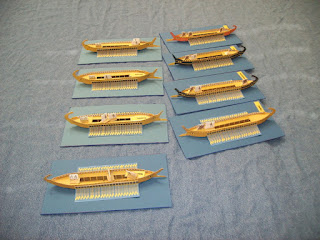 As the archers and slingers peppered each other... 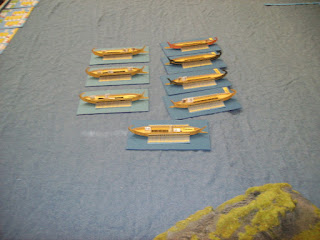 ... some of Lawrence's archers were killed, but Lawrence killed a stand of Hoplites!, Lawrence had got his marines on board Phil's left hand ship, but Phil backwatered, leaving them isolated on his upper deck! 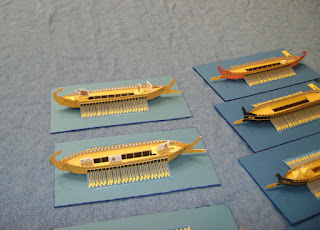 Phil moved his free Trireme round Lawrence's flank, cutting down Lawrence's marines in a crossfire. 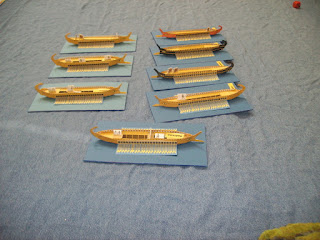 Phil now closed again and boarded one of Lawrence's ships. 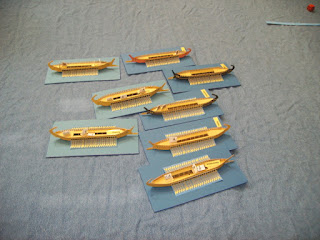 We stopped the game then, with me furiously writing amended rules to add into the next version. Phil and Lawrence had captured a ship each.
As planned, we than had a couple of card games, Lawrence had brought down,
The Good, the Bad, and the Munchkin! - and a more amusing game, Braggart.
A worthwhile day all around!
Posted by Herkybird at 17:17