I ran my usual Percy retinue, the Nevilles, (keen for victory after 3 defeats in the previous encounters we have had) were run by Ian and Lawrence.

Sir Richard Percy stood next to his Gascon mercenaries, adjusting their heavy crossbows, chattering away in their guttral French. Despite his education, Sir Richard understood only part of what they said...

..until one of the mercenaries called "Ere zay come!", and pointed a grimy finger towards the big hill in the distance. Sir Richard looked again at his deployment. To his right, beyond the Gascons and their Pavisses he could just make out his archers hidden in the woods. 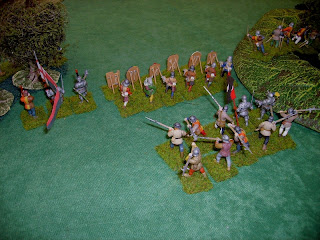 To his left he could see a long line of his archers lining the stream. They had clearly heard the Gascon too as they began to string their great War bows. 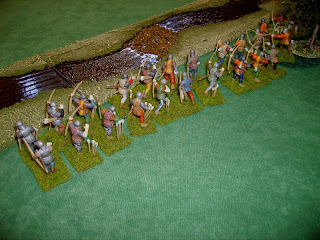 The right wing of the Percy force was quite thinly spread, with no billmen in support. 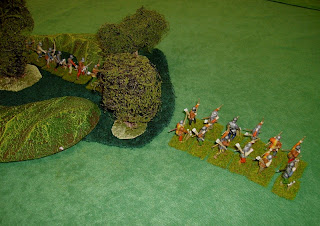 They stood looking over an open field to their front, which the Nevilles would have to cross... 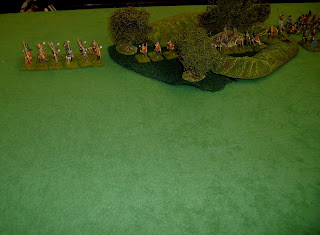 ..Not enough men perhaps, Richard thought, and began unconsciously biting his lip as he often did when vexed. 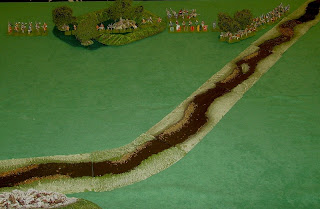 By now, the Nevilles were marching into view -- a line of armoured archers supported by Billmen and a few handgunners under the banner of Sir James Strangeways. 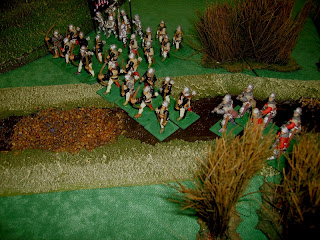 On the other side of the big hill the banner of Sir John Cheyney announced the other half of the Yorkists host. Sir Richard saw the Nevilles plan immediately. They would tie down his line with bowmen whilst the heavily armoured Billmen and Handgunners would crush his right. 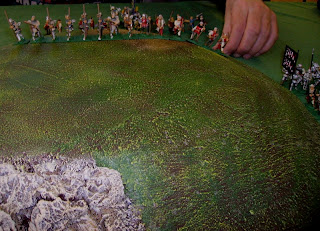 Hidden from Richards sight were his best archers, guarding his right. Much would depend on them standing this day! 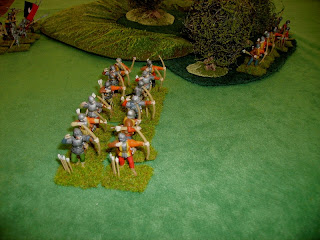 His archers must stand! - he immediately sent word for the Percy bills to move behind the right, and ordered his archers, isolated on the left, to move toward the big hill and engage. 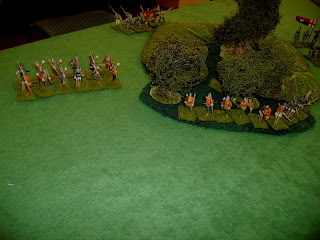 Richards archers, with the wind at their backs were shot at with little effect, apart from a light injury on one man the enemies shafts either fell short or bounced harmlessly off their armour. 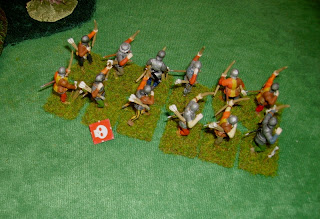 When Richards archers, aided by the men in the woods and the Gascons, shot back, their wind aided arrows and bolts caused havoc in the Yorkists ranks. 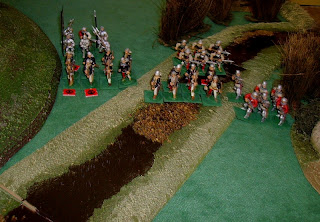 Taken aback, a few of the Neville bowman halted, but the rest of the force bravely pushed on into the arrow storm... 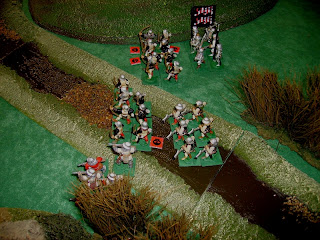 Their shooting, still hampered by the wind, failed to cause any injury as they advanced across the strem, but Sir Richards men, strengthened by more long ranged archery from their advancing left struck down several more of the Neville men. 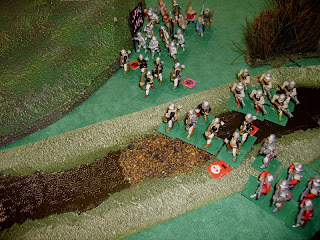 The Nevilles line began to waver, and they began to doubt their resolve... 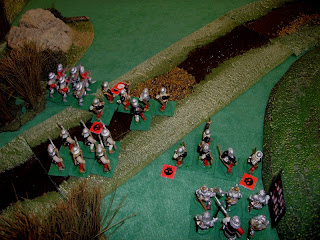 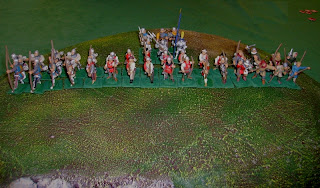 ..However, despite concentrating their shooting on one group of Lancastrian archers only killed one man and wounded two others...

The response from the Percies archers was massively more effective, with a numerical advantage and the wind, they killed and wounded eight of the enemy in return. 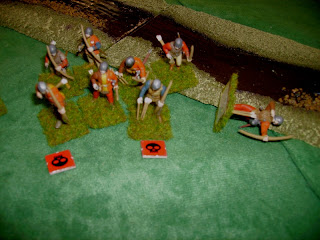 Sir Richard raised his visor and loosened his bevoir, against all the odds he saw the Yorkists fall back and leave the field.
Praise God!, he thought---Only one man dead and four wounded against probably five times as many Yorkists lost.
A great victory for sure, but after his fourth straight win he wondered ruefully how long his luck would last!

The decisive wind was provided by an astonishingly good dice day!!!!