Today, we had a Coastal Forces game using my own rules - once again we used German Schnellbooten against a coastal convoy.

We (Phil, Lawrence and myself) each had 2 boats, and it was my first outing for the new movement templates and ship/torpedo markers. 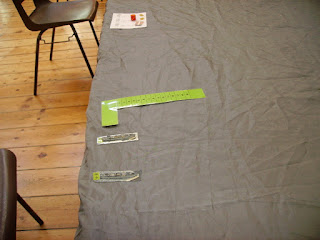 The convoy was a random mix of dummy markers and real ships, escorts on the left column, merchantmen on the other two. 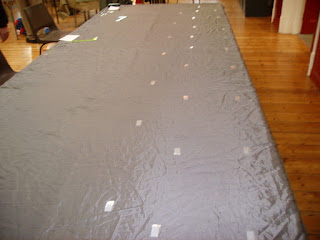 Phil got lucky first, spotting a 2000 tonner chugging along... 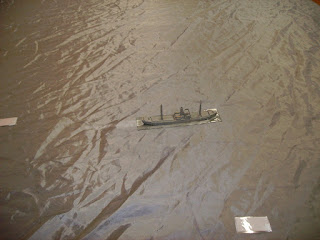 I spotted an Isles class trawler and another 2000 tonner. 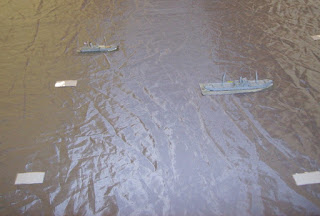 Lawrence rapidly spotted 2 3000 tonners, worthy targets for our 'Fish' notwithstanding - but where was the Tanker, our primary target? 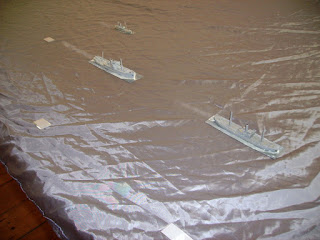 ...there weren't many unspotted counters left! 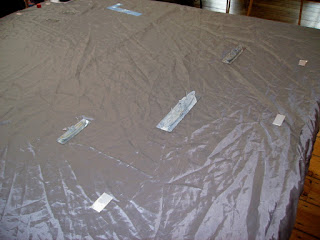 I spotted another 3000 tonner behind the trawler. 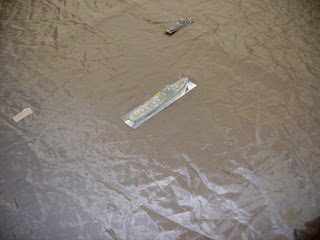 Phil had spotted a requisitioned Trawler and another 2000 tonner. 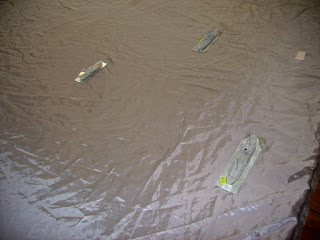 Phil, and the others, were still cruising on electric motors so we would be harder to spot. 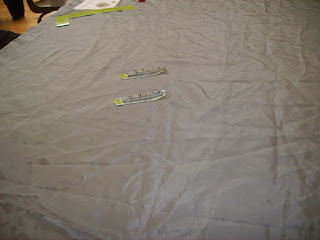 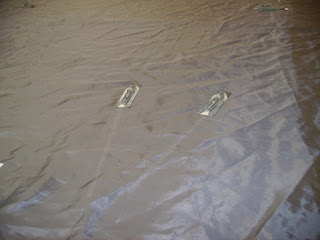 ...try to bypass the Trawler in my way. 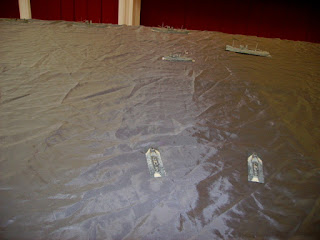 Lawrence had spotted another requisitioned Trawler but it was not in a good position to stop him. 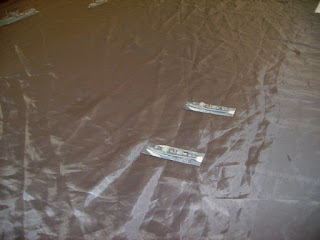 Phil only had 2000 tonners accessible, that Trawler was in a dangerous position for him. 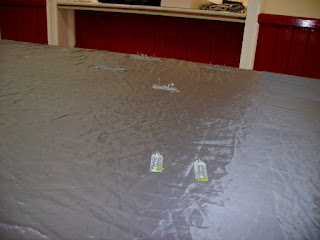 I decided to 'up the ante ' and raced forward on diesel engines, I shot a torpedo off at the 3000 tonner I had spotted. My right hand boat was already looking for better targets. 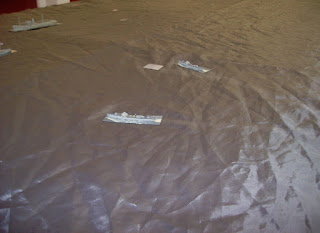 Lawrence had shot a Fish too, the 3000 Tonner spotted it and turned to try and 'comb' the torpedo. 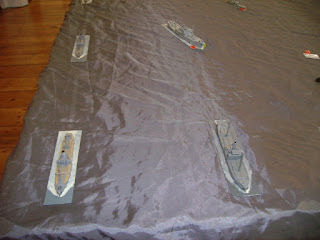 I spotted a Trawler and some lighters - woo hoo! Target of the week!!!!! 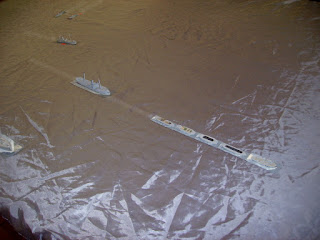 I wondered what the last counter was hiding!!!!! 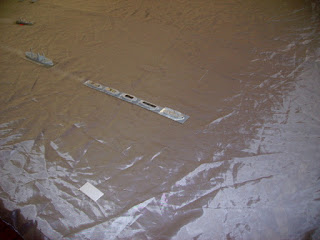 My torpedo hit! - but the ship sailed on, my 'Fish' had exploded in the ship's wake, causing little damage! (We had determined it was full of ammo, so where was the 'Boom!') 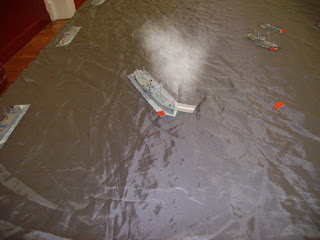 Lawrence got a hit on his ship too, and disabled it, its engines and power were out. 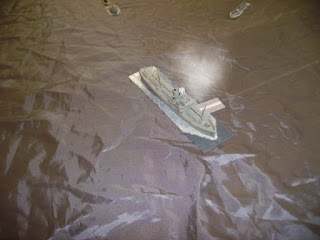 My second boat, under fire from the Isles Trawler shot of both his Torpedoes. 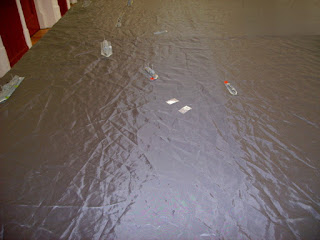 Lawrence had a Fish going for the same ship, surely it was doomed? 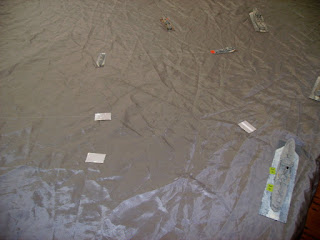 My first boat broke though the convoy in hope of getting a good target. 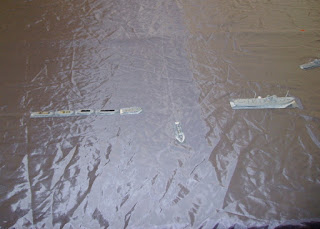 Phil's boats had crippled the guns on the small trawler with their cannon, and now shot a torpedo at a 2000 Tonner. 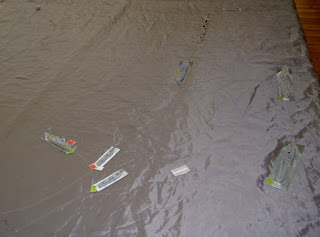 The Merchantman spotted the attack and successfully combed the torpedo. 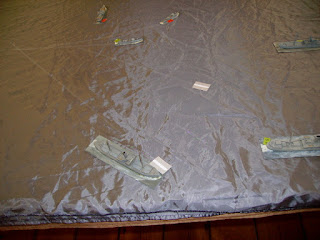 Damnably close one, that! 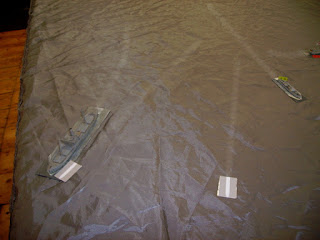 My torpedoes ran in on the 3000 Tonner Lawrence had damaged... 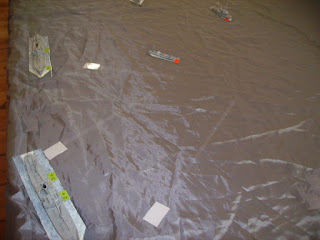 The ship slowed and turned, making both my Torpedoes miss! 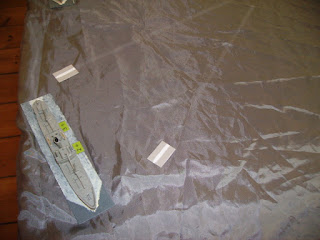 Lawrence got another hit on a 3000 tonner, but it exploded short like mine, something wrong with our torpedoes methinks! 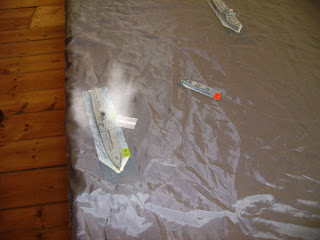 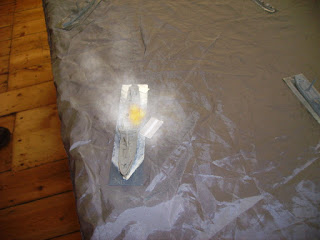 Well, that was a weird game! Only one Merchant ship sunk and 2 damaged! A thorough waste of torpedoes!!!!
We followed this game with one of 'The Sorcerer's Cave' a game from the 1970's. Lawrence won this one as Phil got turned to stone and I got smashed up by an Ogre!