Frederick on the defensive?

Today we returned to our 7 Years war gaming after the excellent Battleground show last week.

I had my Prussians against Lawrence's French again, as Phil etc were absent again.
One plus, several other players at the club were off with various lurgies - which, though bad for them, meant we got a 12' table to play on, no more cramped deployments!

So, how did the game go?

I got to deploy first but Lawrence had outmaneuvered me and had an Austrian brigade round my flank! I wondered if their advance would combine with the infantry facing my right wing cavalry and crush my right wing? 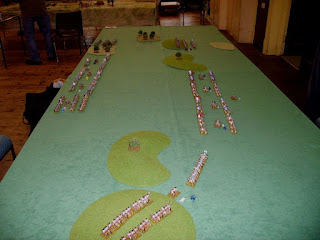 The French left was regiments Bretlach and Trauttmannsdorff on a low hill, with the Ansbach dragoons supporting, facing a steeper hill. 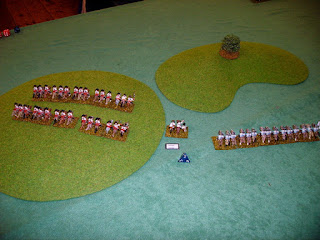 The French infantry centre was larger than mine, with more guns. 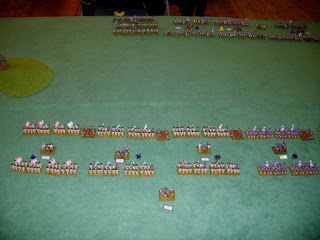 The French right was their weakest, with the Cuirassiers du Roi supported by the light Cheveaux Legeres. 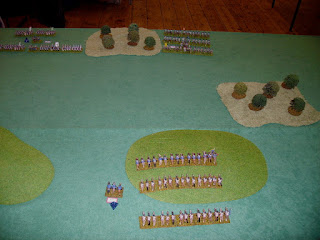 Facing them was 2 Kuirassier and 1 dragoon regiment (I had a Frei Korps battalion in the wood, but they were never needed!) 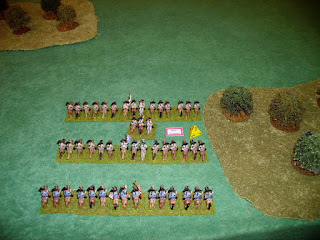 My centre was only 3 brigades of infantry. My position opposite a steep hill would mean both lines outflanked the enemy right. 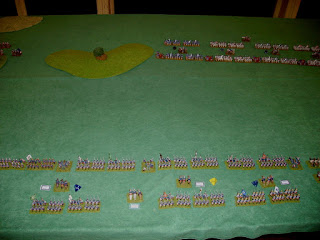 My right (Under Seyditz) - was seriously threatened. 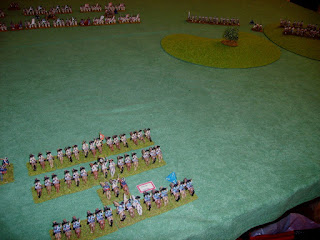 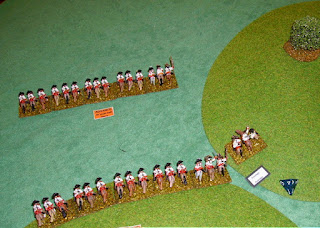 I would have to engage these, or lose the battle! 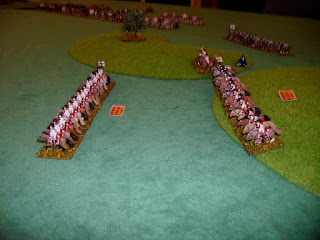 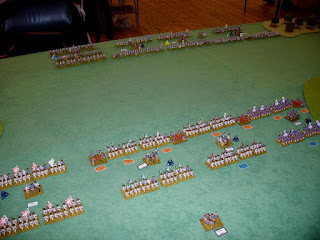 The French right seemed half asleep and stayed in position on the hill. 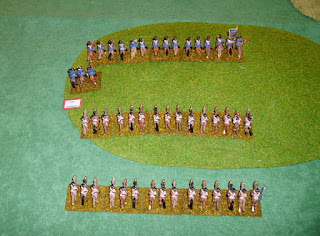 My right wing raced round to face the Austrians, before the French infantry became involved. 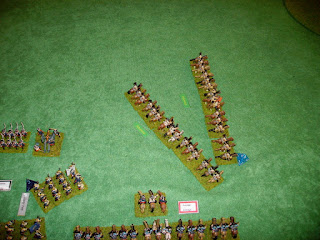 I sent Frederick himself with 2 Grenadier battalions to support my left wing cavalry... 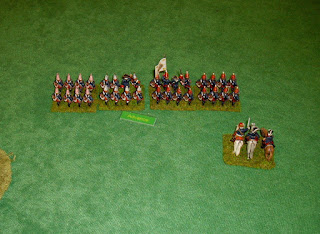 ... I was uneasy about the outcome of the battle on this wing! 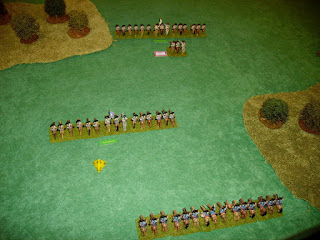 KR10 was heading for the French cavalry. 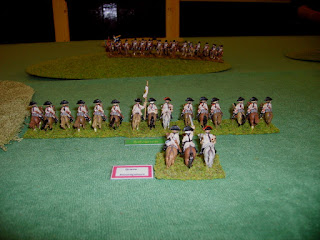 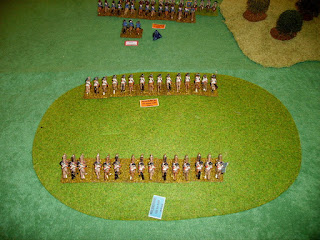 With great elan, the French horse smashed into KR10... 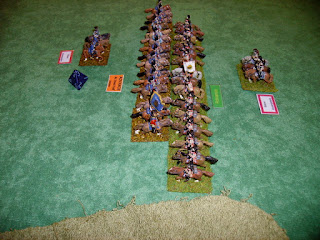 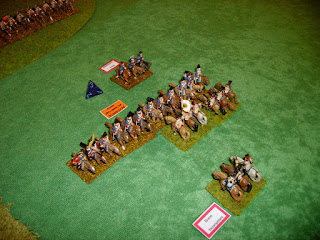 The French pursued...straight into my second Kuirassier regiment, who smashed the French in turn! 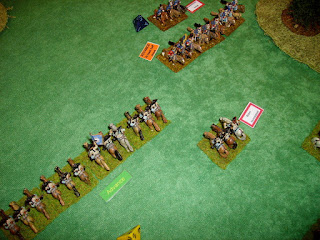 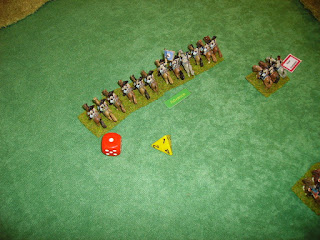 ...but raced in pursuit straight toward the French cavalry... 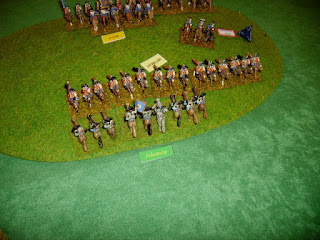 ...who retreated before contact, disrupting the 3rd line cavalry! 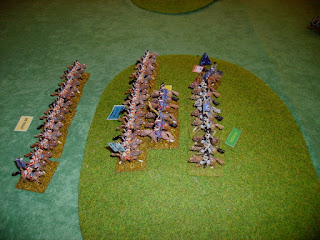 Fortunately, the French infantry were having problems advancing in a steady line, especially the ones facing Seydlitz on the other flank. 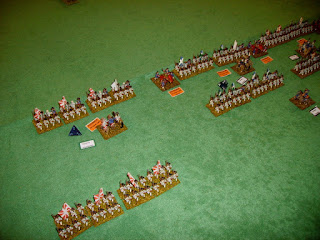 In a 'make or break' charge, KR8 faced off with Regiment Bretlach,  If I lost, they would sweep into my manoeuvering 2nd and 3rd line horse and probably demolish my right wing...
...But KR8, with Seydlitz in support smashed Bretlach, I was saved! 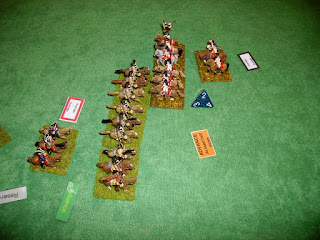 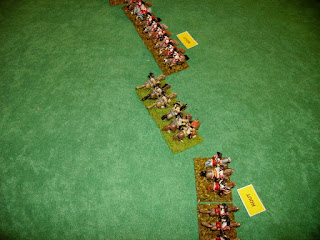 The game was up for the French! On my left the French horse was retreating...my cavalry held the hill, with dragoons and Frederick's grenadiers coming up in support... 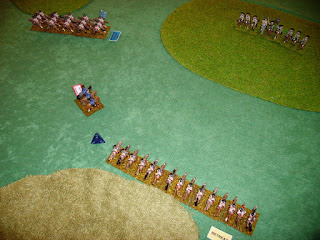 ...Their centre was still far from my line... 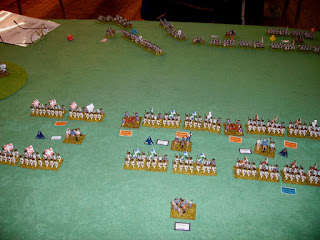 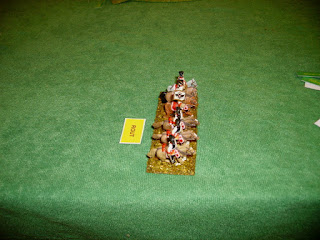 ...as was Trauttmannsdorff...the Ansbach dragoons were on their own... 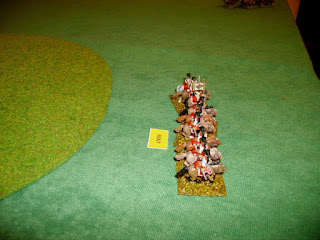 ...against my Kuirassiers and dragoons, supported by fusiliers. 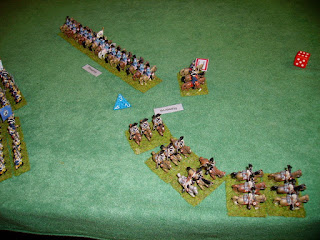 The French broke off, while they still had enough horse to cover their army.
It was now that Lawrence let me know why his centre was so hesitant...in order to have so many he had made all his foot 'Low Morale' which would have made them fragile in a fire fight with my infantry!

It was a very close run thing today, If my right wing cavalry had lost that first fight, it would probably have been a win for the French!
Posted by Herkybird at 17:50