World War Wonning in the air!

Today, we returned to the skies above Flanders in 1917 with a couple of games of Wings of Glory.
In our first game, we were running a photo reconnaissance of a German artillery position.
Lawrence opted to pilot the RE8 camera plane, Ian and I had SE5a's in escort.

(The Germans, as usual were controlled by my solo rules: TWC downloads page) 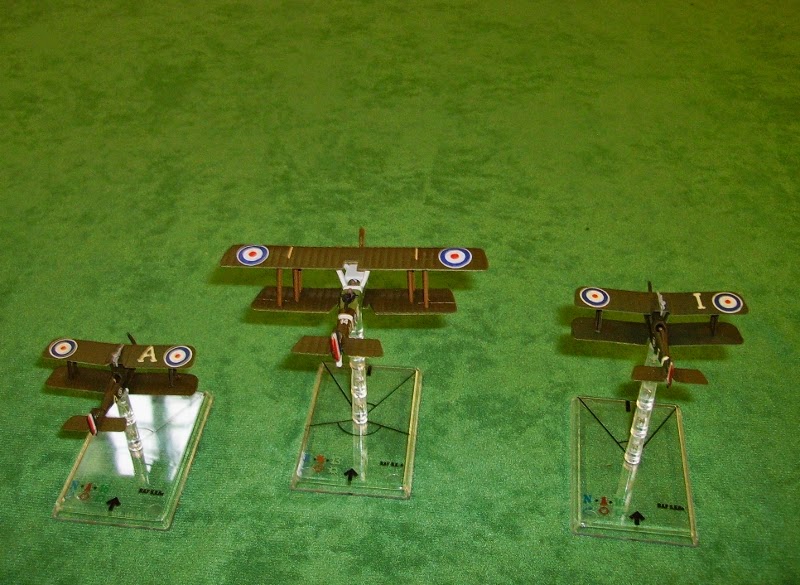 The artillery was being patrolled by a flight of 3 Fokker triplanes. 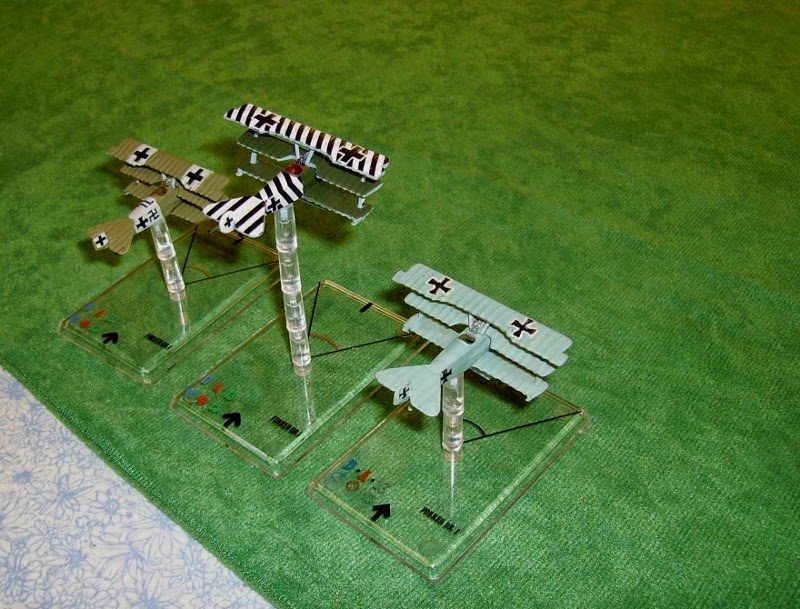 Our first move. Ian ran ahead of the RE while I manoeuvred behind. 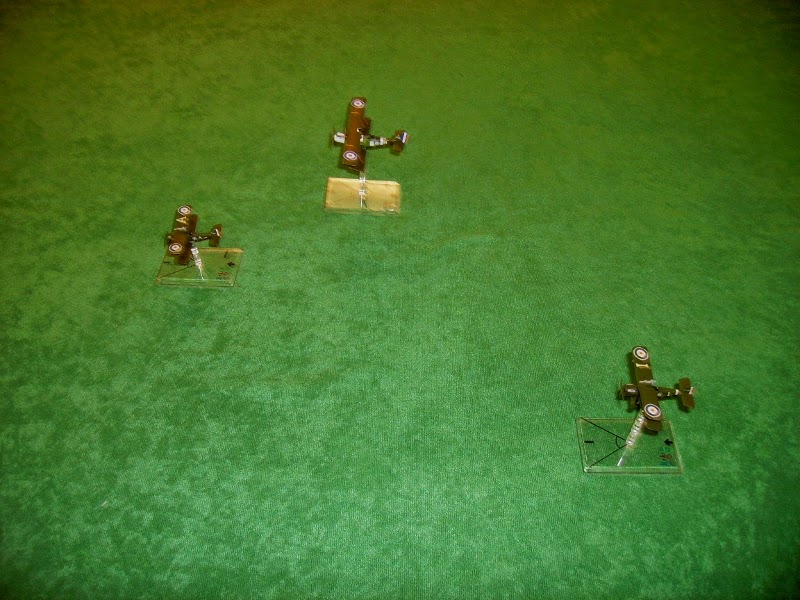 The Germans flew serenely on towards the battery. 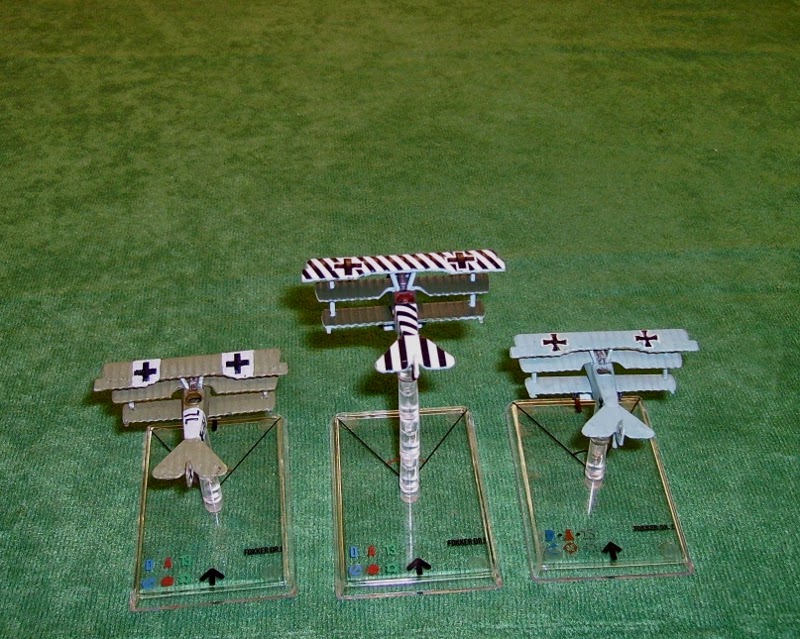 Despite their slow speed, they were soon ahead of our  planes. 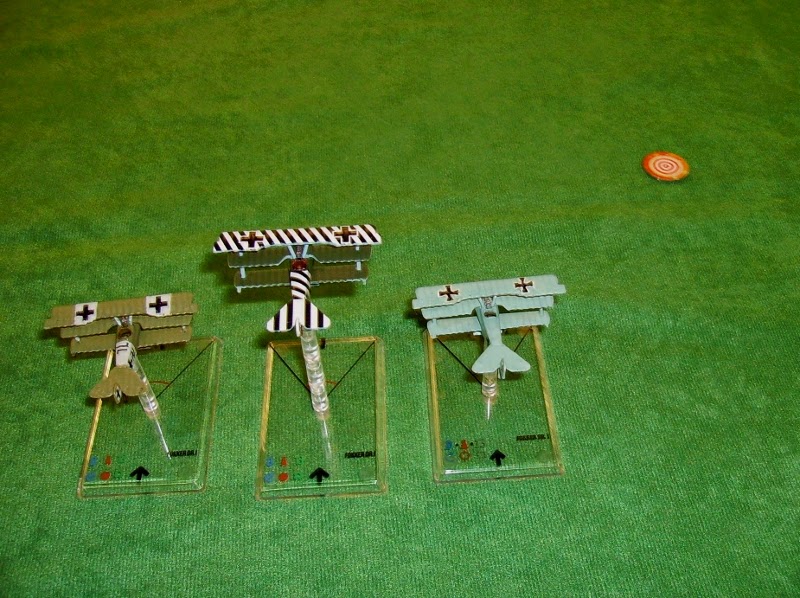 It was almost as if they hadn't seen us! 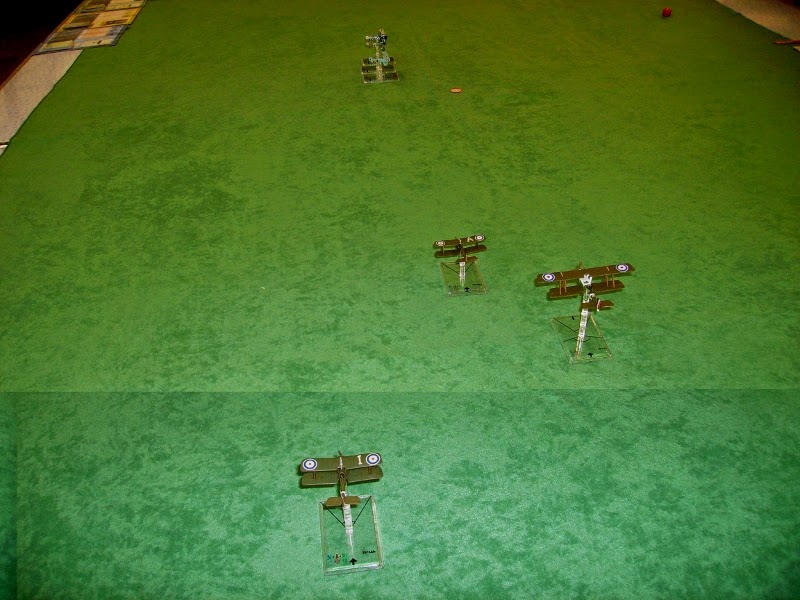 Ian powered towards the lead Fokker as they finally turned to meet us. 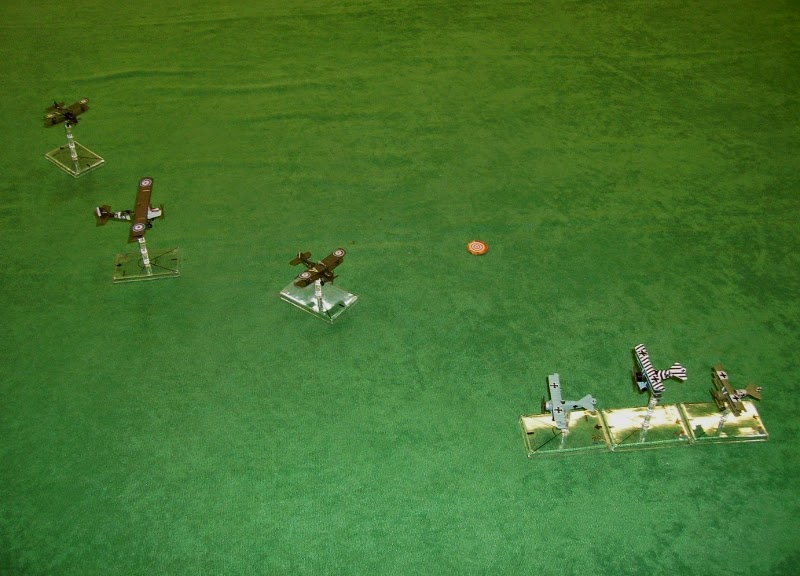 The RE moved for his straight photo run, Ian raced into the Germans, but neither side got a shot as they passed at speed. 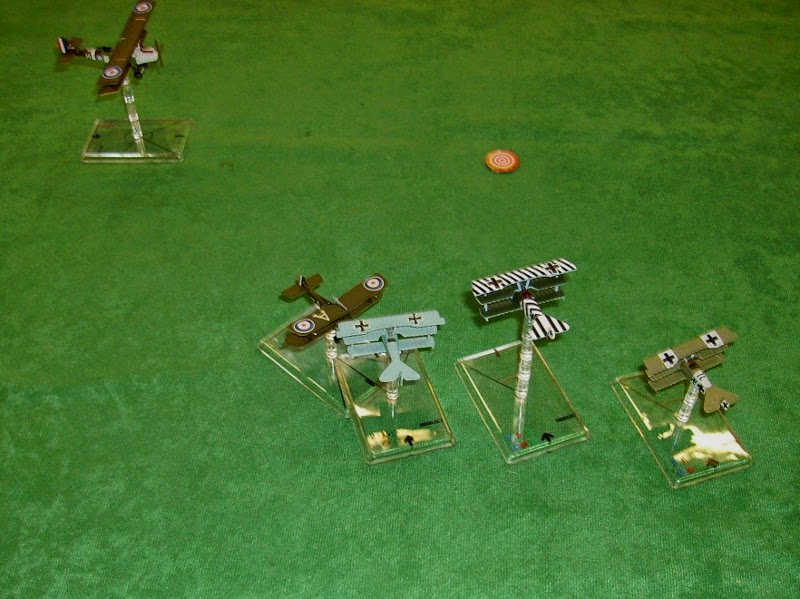 The Fokkers were now free to attack the RE, I moved from behind the RE to protect it. 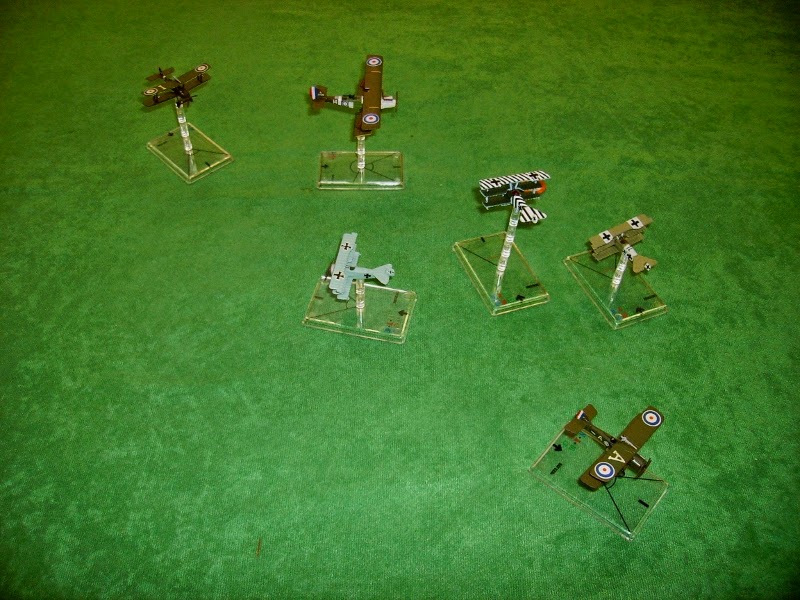 The stripey Fokker hit the RE and set it afire. 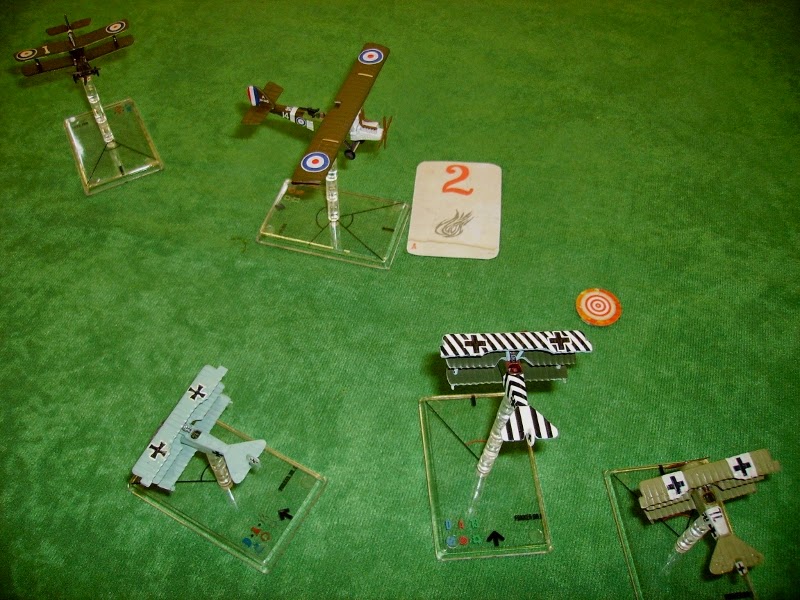 I moved to attack Stripey but the RE was in the way! 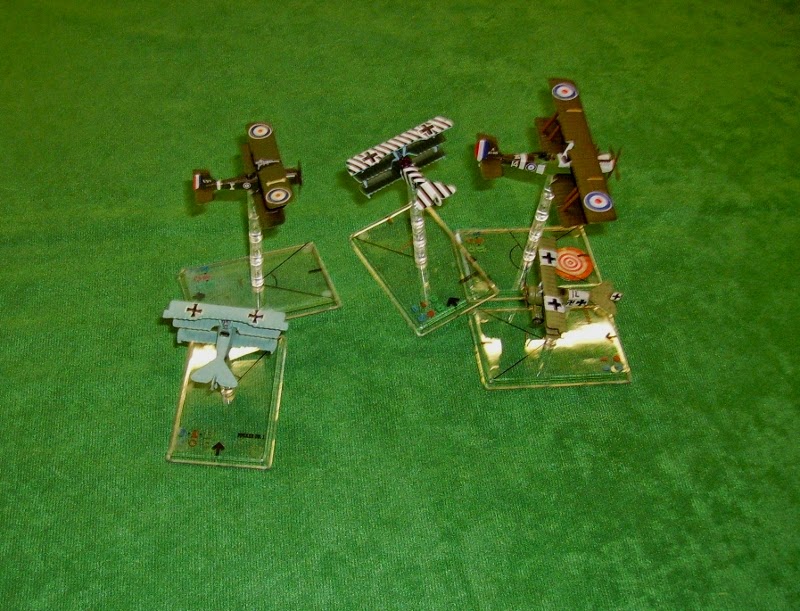 Amazingly, no-one got a clean shot! 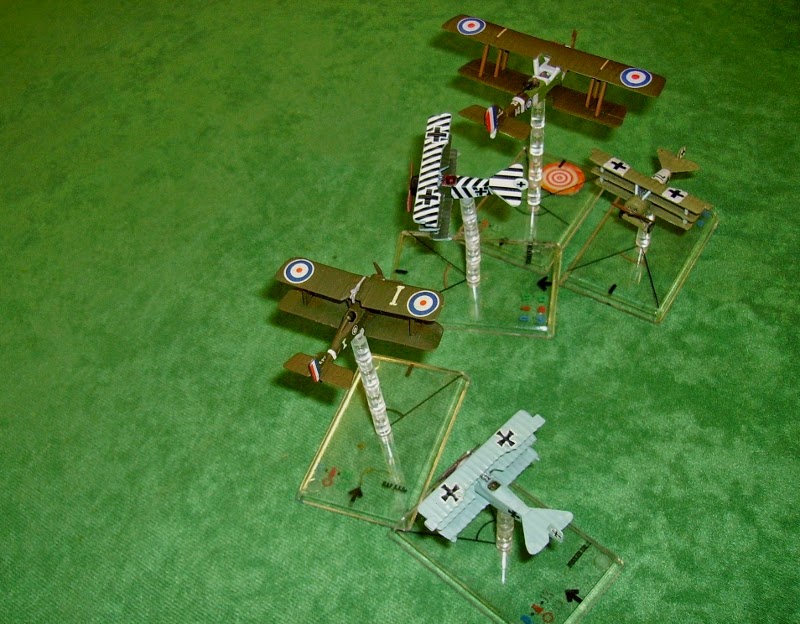 The burning RE got his picture! 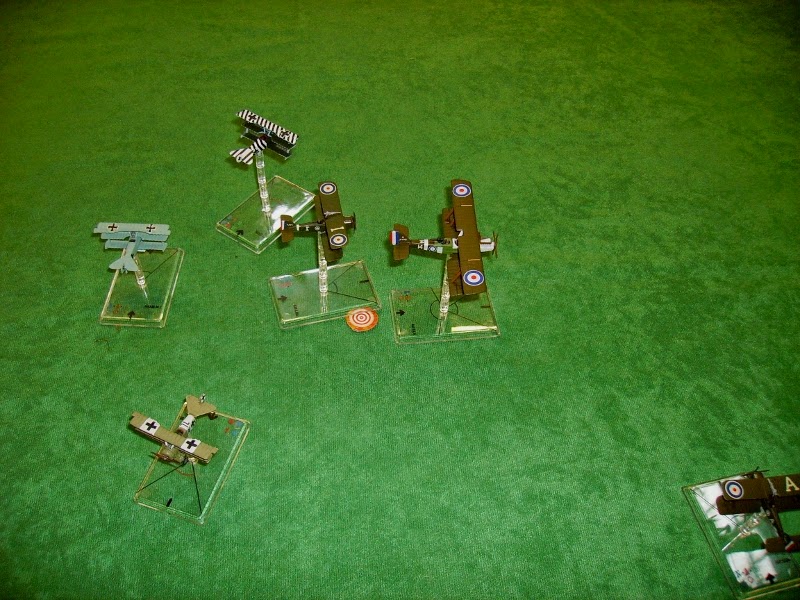 Ian returned to the fray, and hit Stripey. 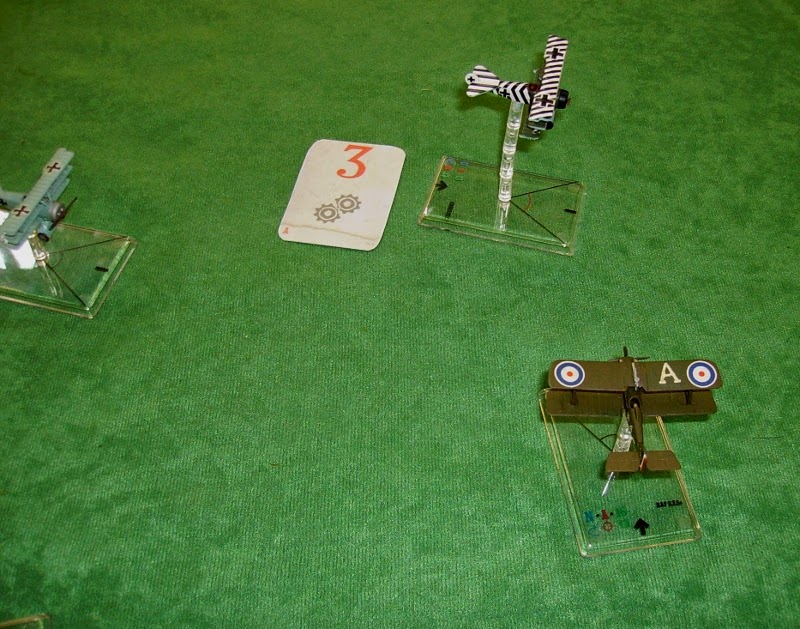 ...everyone else was manoeuvring wildly. 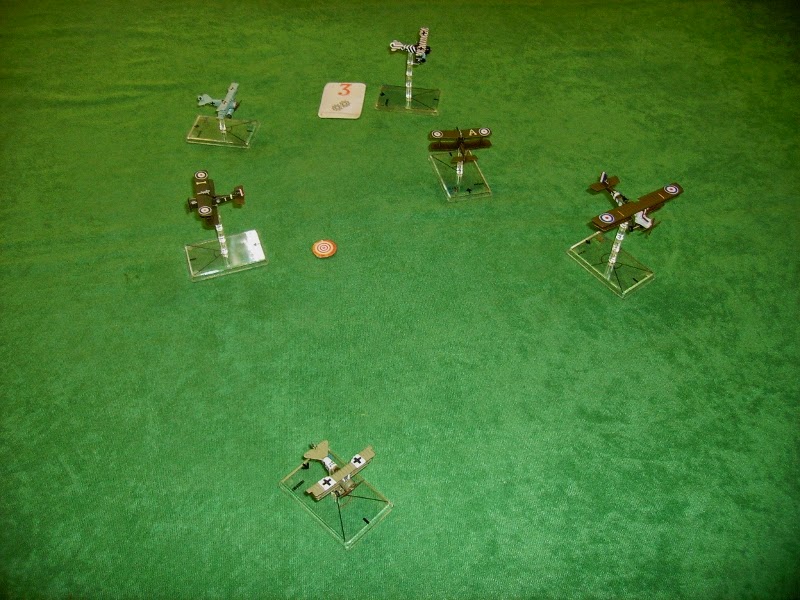 The green Fokker went nose to nose with the RE and hit it badly! 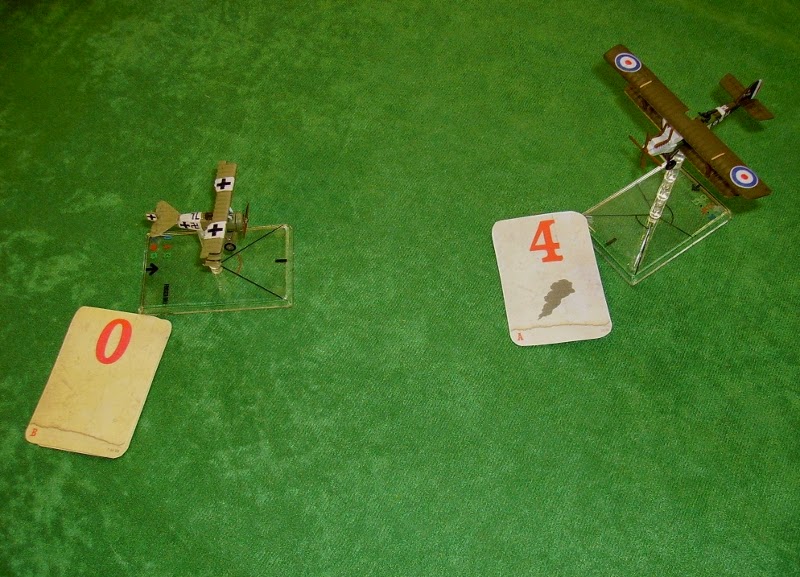 I lost another shot to the RE being in the way! 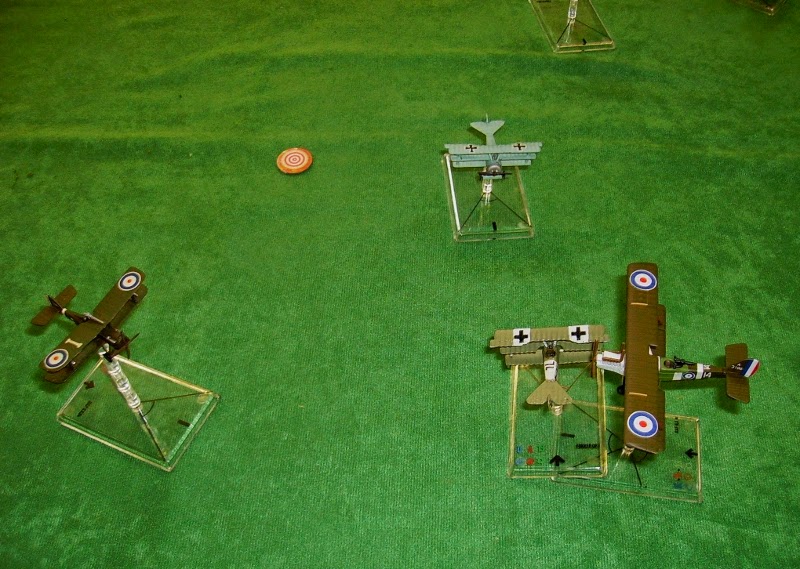 (overview at this point) 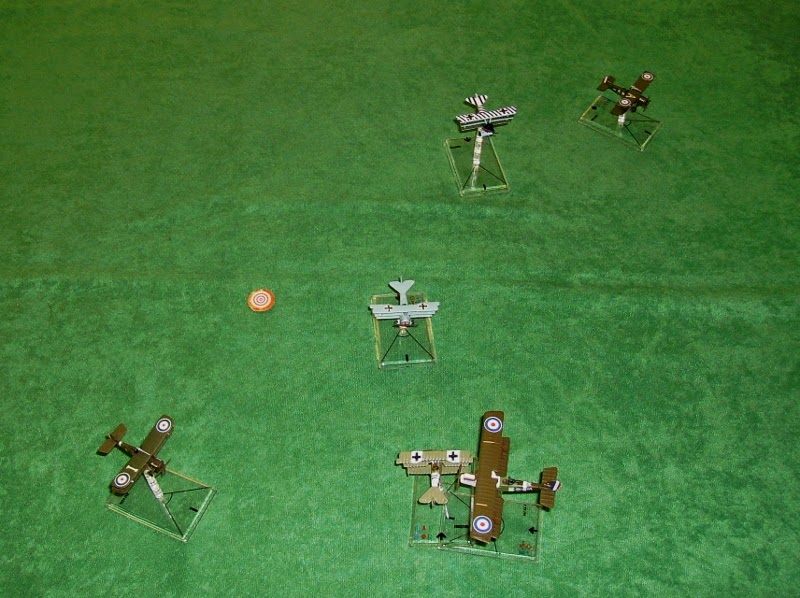 As we turned, the RE's rear gunner hit the green Fokker. 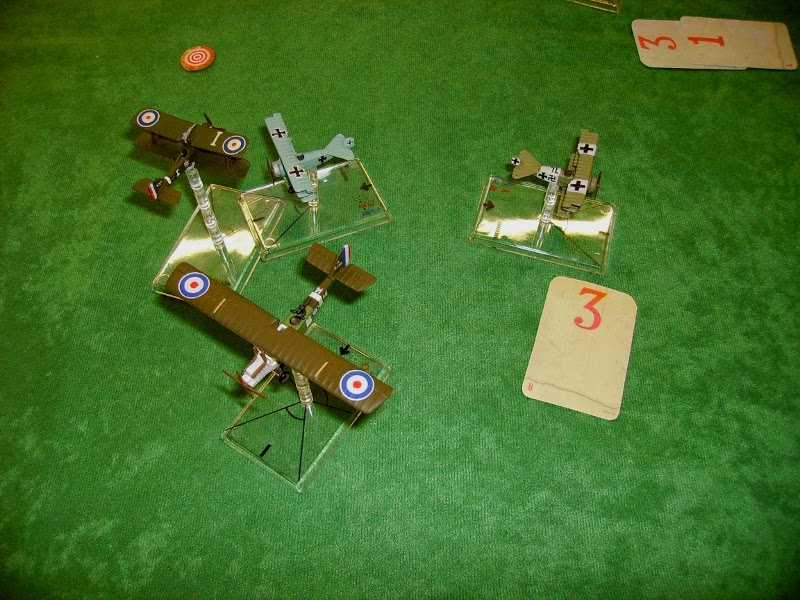 Ian had outmanoeuvred stripey, and got another good hit! 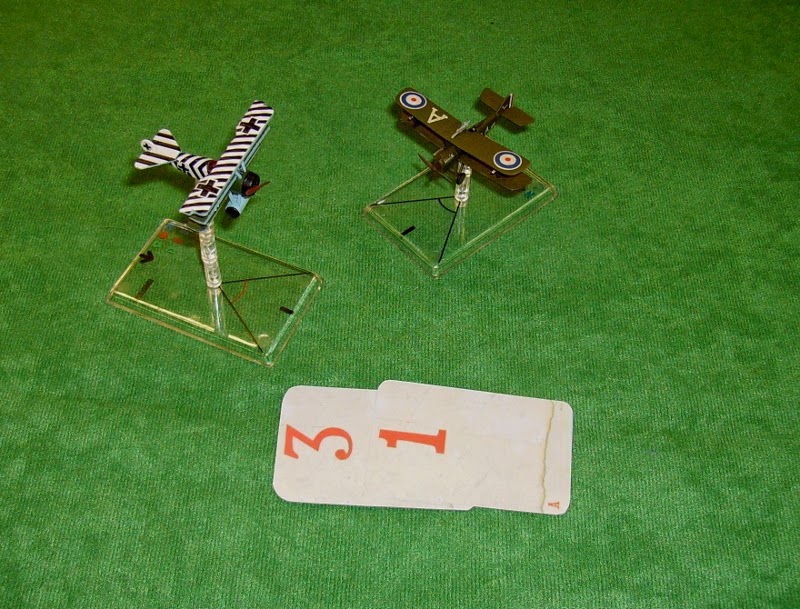 The next move, the only firing was ineffective. 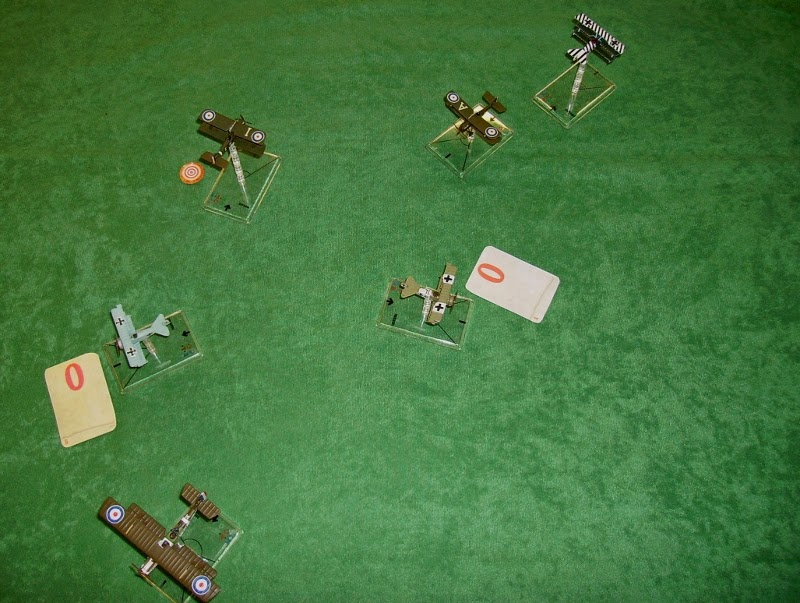 As the blue tripe tried to attack the RE, the rear gunner hit it again. 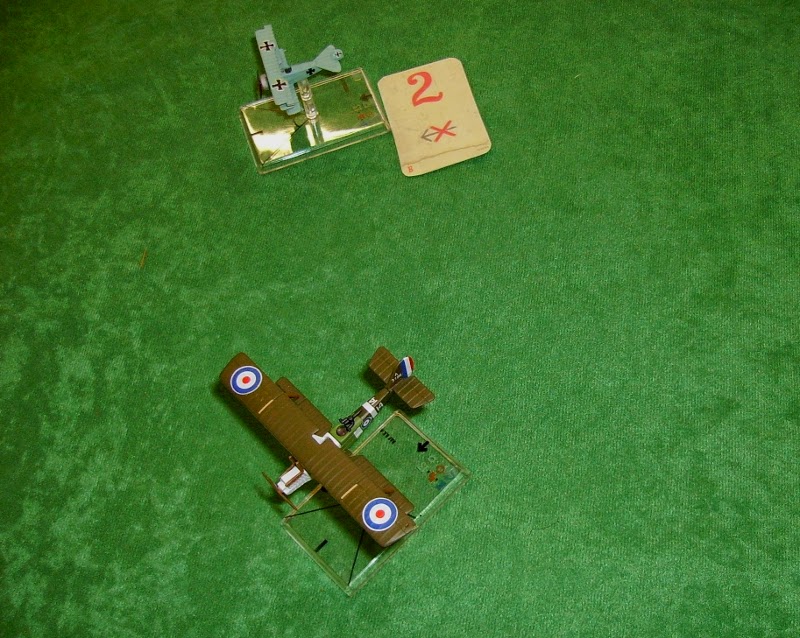 Ian was fencing with the green tripe, while I turned to attack stripey. 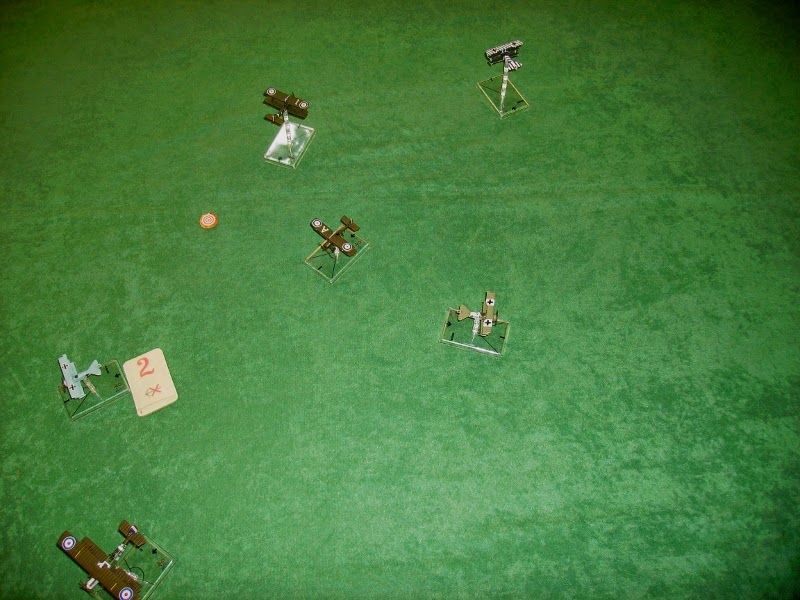 My SE went nose to nose with stripey, and we both took bad damage... 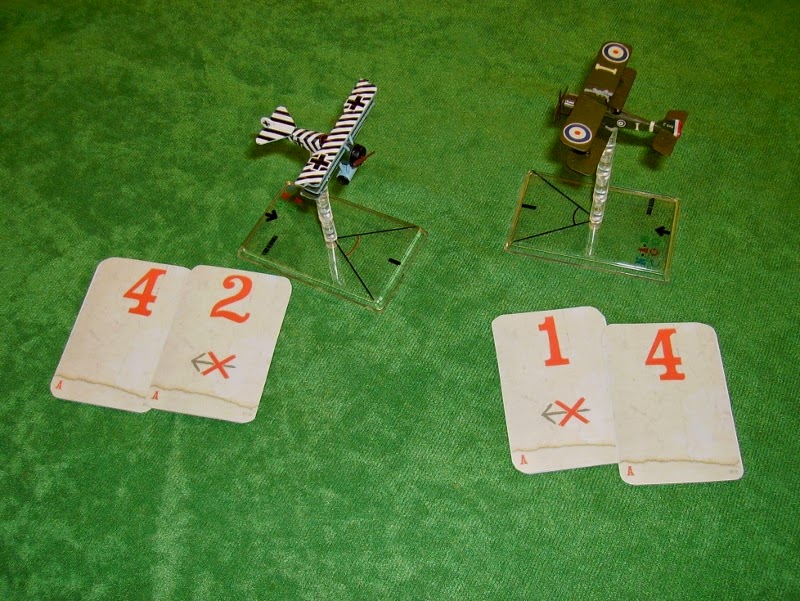 Stripey had been hit before though, and went down in flames! 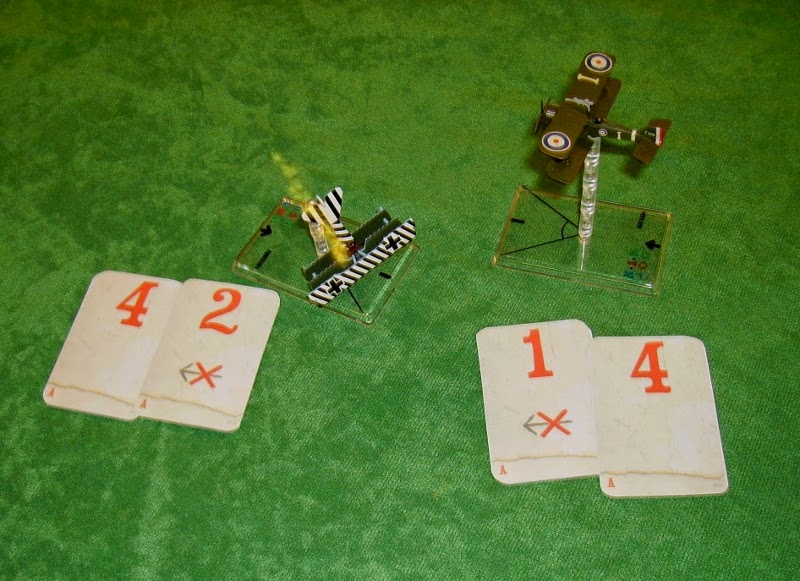 The blue tripe could not catch the RE and took more damage... 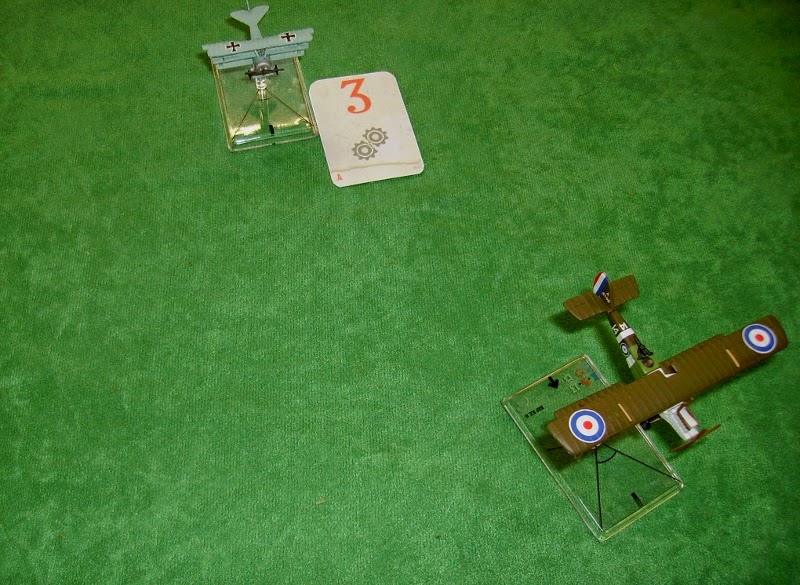 ...From Ian - who had outrun the green tripe. 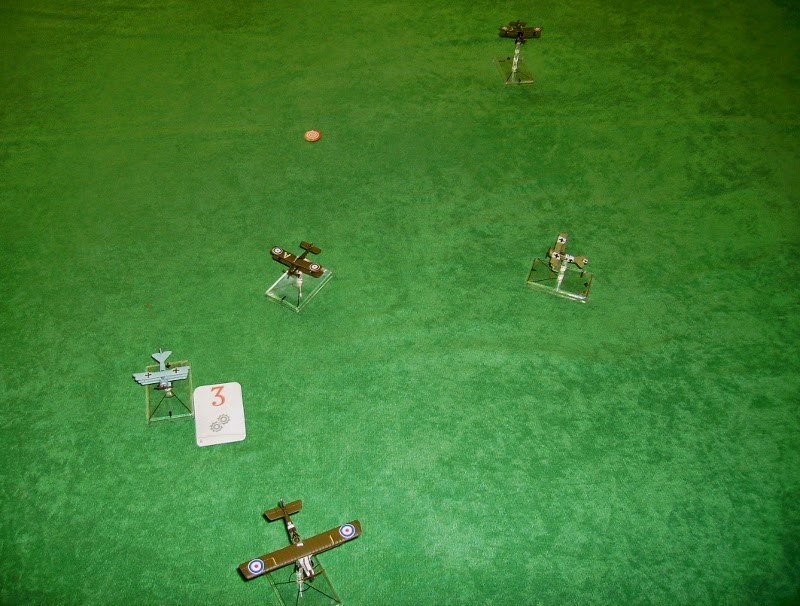 As the RE left the table, and escaped, Ian tried another shot at the pursuing tripe - but missed. 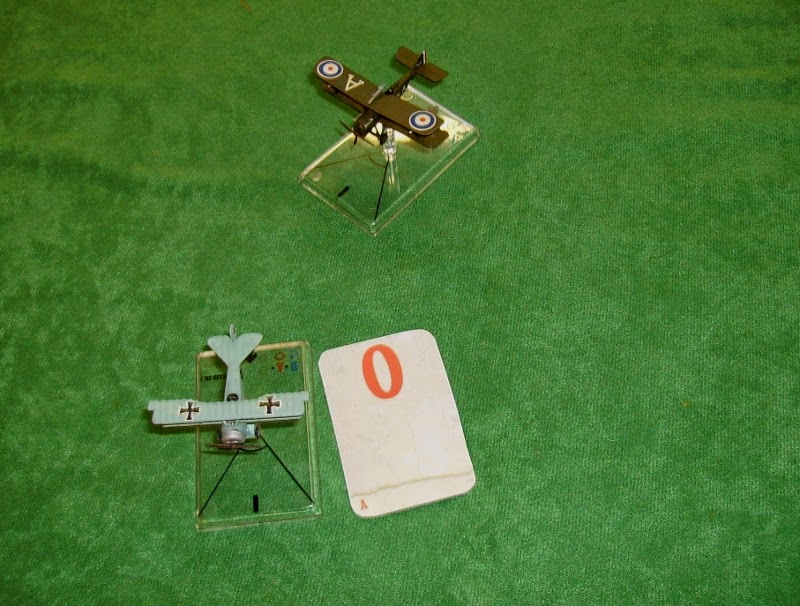 We then left the table too, having succeeded in keeping the photo plane alive!. The RE had only just made it, it only had 3 points left!

In the second game (I didn't photo this) Ian got 2 planes and a DH4 we were escorting shot down a third, and we suffered no losses again! - we are getting good at this now, and the SE5a is vastly superior to the Albatrosses and Fokkers we were facing.