Well, back at the club proper after the August break and Border Reiver last week, we tried and ECW game using VCA (Very Civile Actions), a variant of Spanish Fury. It was not designed as a game, but a rule test to see if the rules would work in a possible forthcoming campaign.

I must apologise for the poor picture quality, I forgot my usual camera and had to buy a cheap happy snapper - most of my pics were blurred and had to be discarded! (sigh!) 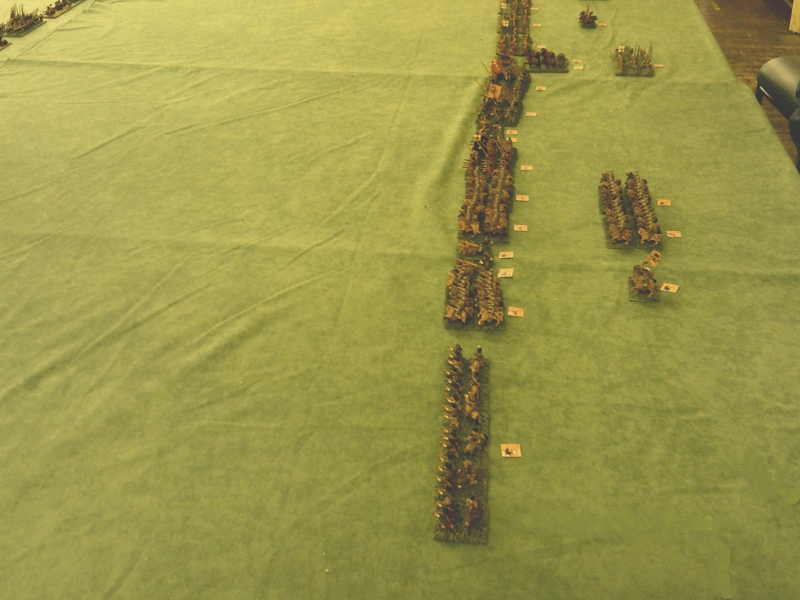 Opposite me, Gareth deployed some 'Oxford army' infantry regiments and some 'Cavalier' cavalry. 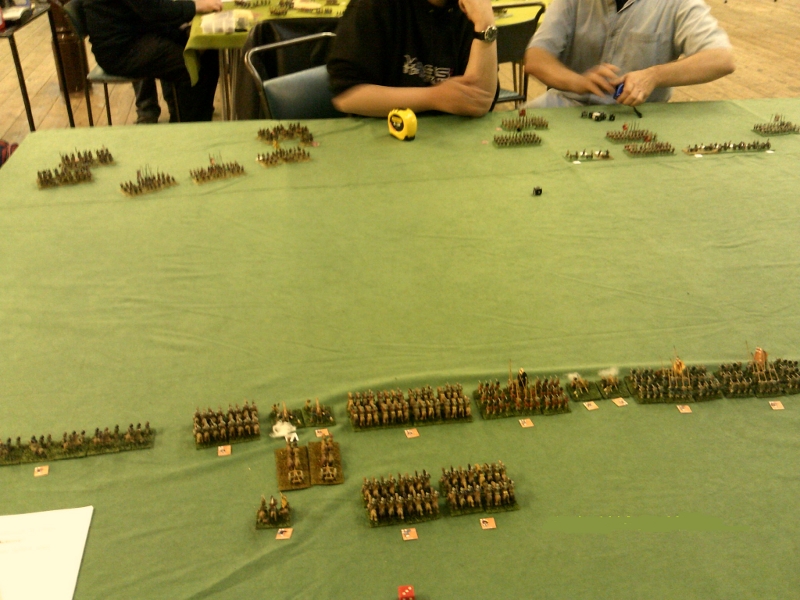 Ian. on the Parliamentarian right had a mix of 'Seasoned' and 'Rural trained band' infantry with a wing of Good Eastern association horse. Opposite him, Phil deployed more good Royalist infantry and Horse. 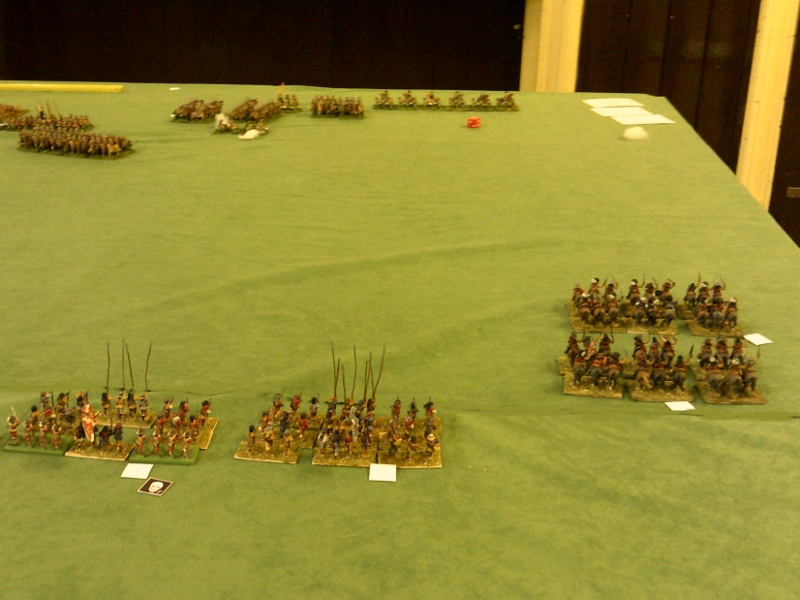 On my wing, I had to redeploy may horse to meet Gareth's advancing cavalry. My artillery was more effective than Gareth's and I managed to slow their advance, I even killed a regimental commander with a demi-culverin shot! 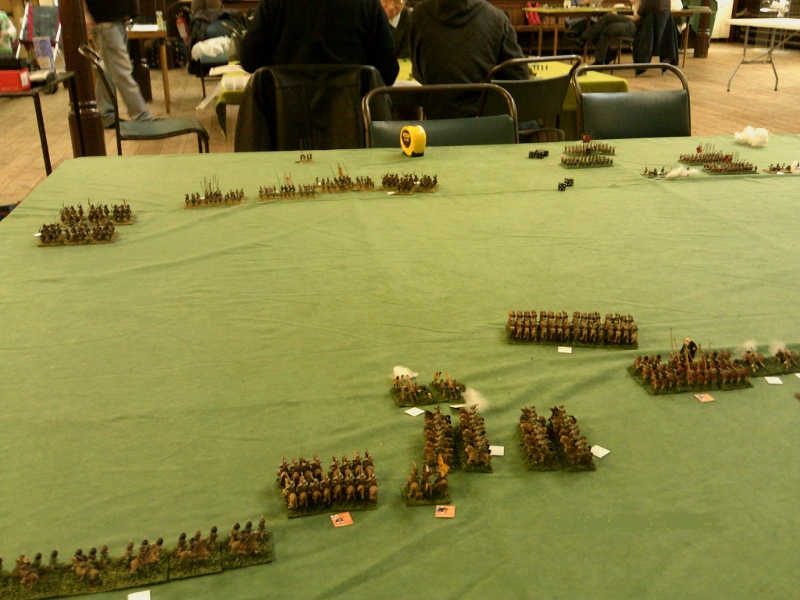 On the other wing, the royalist horse charged Ian's horse and dragoons. The royal horse broke one of Ian's regiments and pushed back some (lucky) dragoons, at the cost of one of their regiments of Cavaliers.
The royal 'Grand Battery' in their centre caused large loss of life in Ian's infantry, even at long range! 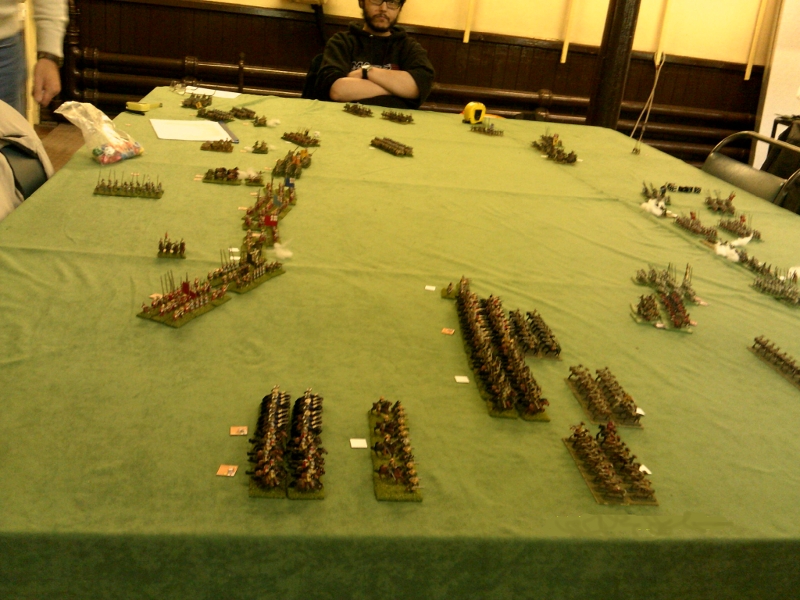 It took a long time to even get this far, as we had deployed too far apart, had too large forces and much too much artillery which rather dominated the game. We decided the time was getting on and stopped at this point.

So what did we feel about the rules?

Several point came out in discussion:

(1) The rules have nice graphics, but are laid out badly, making it difficult to find rules. The question/answer layout seems bizarre, at least to me.

(2) Artillery is FAR too powerful, even at long range. Like much in the rules the results are based on a single D6 result, which gives a very limited range of results - this leads to some very extreme combat results.

(3) The results of combat seem at odds with historical precedent, for example, the writers seem to think Royalist horse is virtually unbeatable, even by troops who historically did well against them.
It seems the game designers want units routing, then rallying to return to the fray. This is not how troops acted very often.
I actually thing the writers must have some funny ideas about what happened at Lansdown, Roundway down, Naseby, and dozens of other battles I can think of!

(4) The game is ponderously slow, and while this was due in large part to our inexperience with the rules, the alternating unit 'I go, You go' system is very time consuming, especially in multi player games.

(5) The system does not allow units to form defensive circles with pike in the centre and musketeers sheltering under the pikes against cavalry! - a historical defence widely used.

We will try a smaller game with much smaller forces next time, though I fear this may only magnify the problems I perceive are inherent to this game system.