Getting my Russians out for an airing!

As we continue play testing the new version of my 7 year war rules -Lawrence and I had a game by ourselves, our other players (rightly) being absent doing important life things!

We diced for initiative, and once again Lawrence's Franco-Reichs army had to deploy first.
To my surprise, he chose the side with a steep hill on the flank, which would disrupt his troops, but allow my light cavalry to move about on?!

My Russian Heavy cavalry and the Serbsky hussars, supported by 2 guns and a dismounted dragoon regiment and some converged grenadiers. 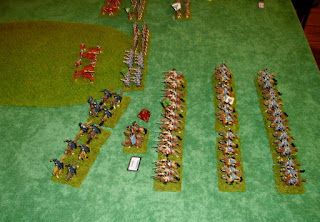 My strong infantry centre, and right wing, consisting of a unit of Kalmuks, and 2 of Don Cossacks. 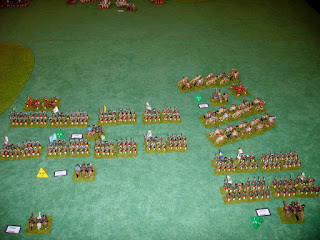 Opposite my heavy cavalry, Lawrence had 2 regiments of Austrian Kuirassiers and 2 of dragoons, behind a grenadier brigade. 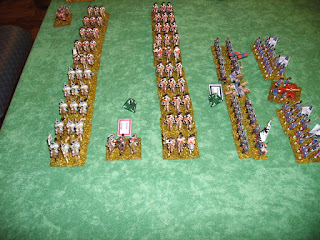 To the left of these, he had a wavy line of Battalions supported by artillery. 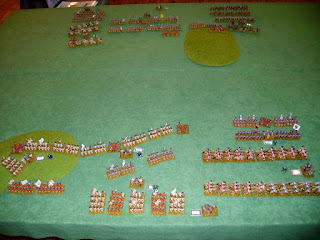 My initial command roll was...bad! - I only managed to get my Hussars moving. 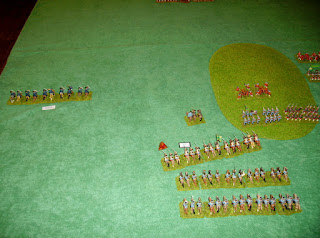 My Infantry centre with its 2 heavy guns managed to get moving without problems. 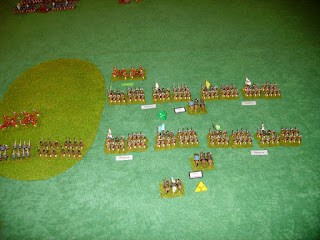 On the right, a dilatory unit of Cossacks blocked the advance of my grenadiers. 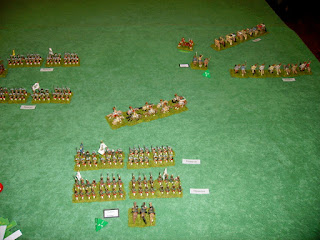 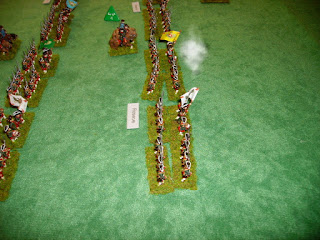 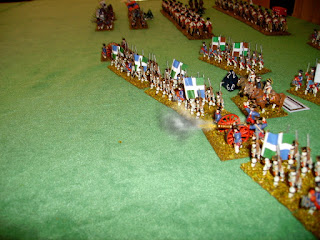 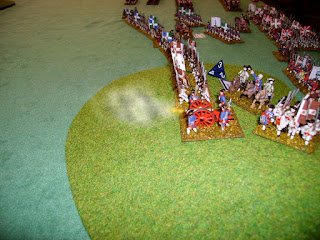 Lawrence had command problems bigger than mine! He did, however, manage to get his Austrian Kuirassiers shaken out into line to face my Serbs! 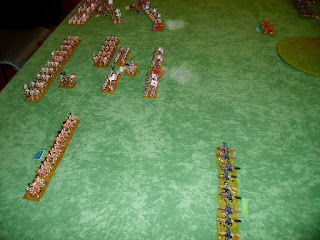 My left wing general managed to get his horse moving at last! 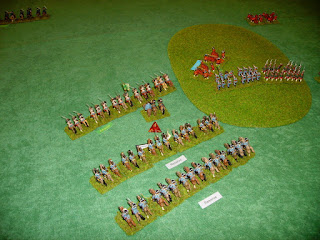 In the centre, the heavy guns, which would outrange their opposite numbers, deployed under fire. 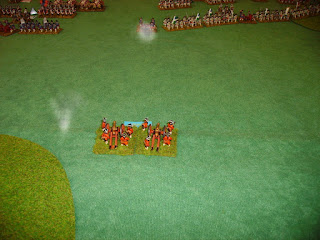 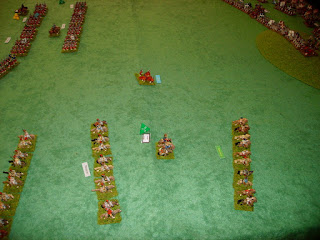 Back on the other wing, the French artillery was getting the range... 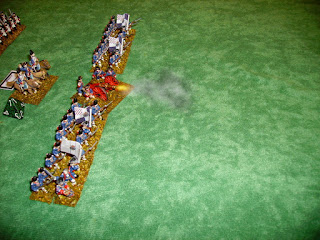 ...disorganising my single regiment of Kuirassiers. 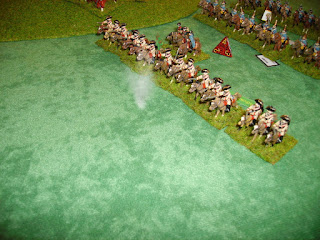 In the centre, my heavy guns deployed in a leisurely manner!... 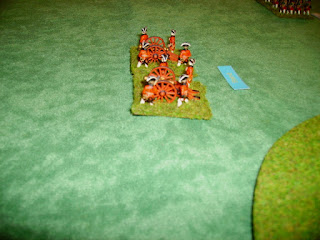 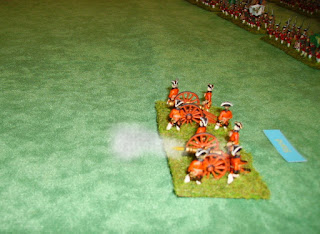 Whoa! That surprised the French!--I was already in accurate range! 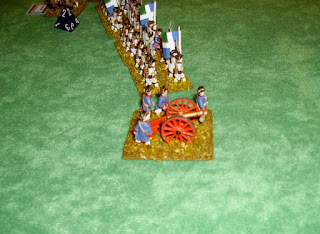 My howitzer, supporting the light horse, also got into range and began bombarding Lawrence's men on the hill. 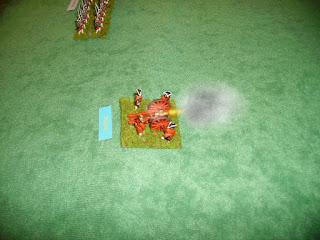 The French began to fire back. 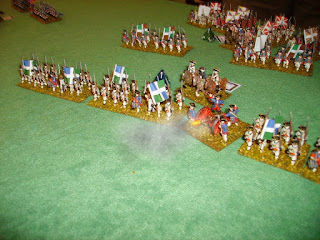 On our heavy cavalry wing, a failure in command left Austrian regiment Bretlach advancing alone in pursuit of my retreating Serbs, My Kuirassiers managed to charge their flank, but the Austrians fought well, and they only retreated in fair order from the combat. 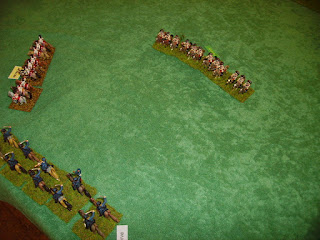 My Kuirassiers were halted, reorganising, when Lawrence finally got Austrian Kuirassier regiment Trauttmansdorff  moving in support! I surprised them by sending my dismounted dragoons to shoot them! 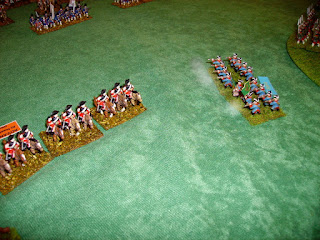 The Kuirassiers retreated, but Lawrence's infantry was advancing, catching my dragoons in flank! 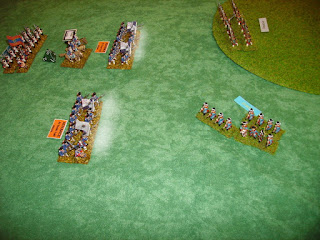 My dragoons tried to engage... 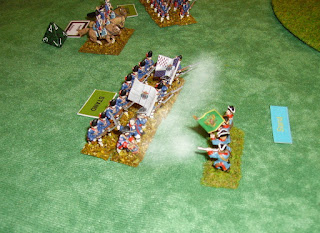 ...but broke under the fire of the French grenadiers! 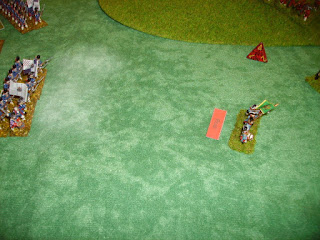 On the other flank, my Howitzer was still bombarding the ridge... 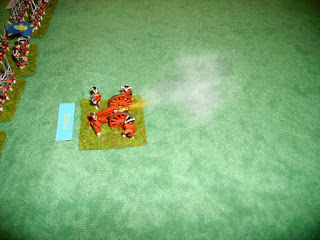 ...the French gun disappeared as a shell hit their ammunition! I was free to pound the French line unopposed! 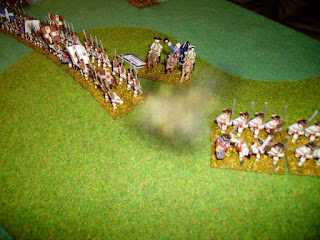 I had managed to get my Kuirassiers rallied by my horse-grenadiers, supported by artillery and the Serb hussars, I was feeling...confident! 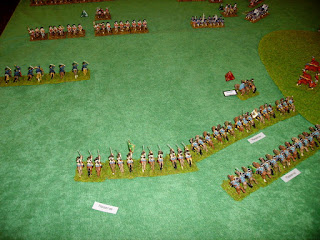 The Austrian Kuirassiers, still under fire from my guns on the hill, refused to attack again, both being at reduced strength after their previous actions. 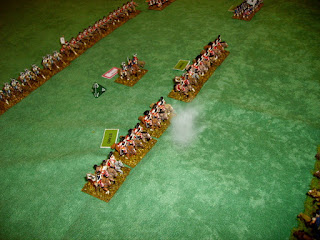 Lawrence decided the French would leave the field rather than risk losing on this wing.
They had been cursed by a combination of poor generals, and bad command die rolls. My rolling had been at times...spectacular!
After last week's game, it was nice to see the Austrian Kuirassiers come a cropper, though! - and my light cavalry had pinned down the French. I tried to get the Kalmuks to charge the disorganised French on the hill, but they smartly refused every time ('We are horse archers, not Kuirassiers!')

Next week, I will return to use my Prussians again!