Recently,I have been trying to formulate a new set of 7 Years War rules, and getting not very far along with it!

As a help, we did a game using the current rules we have to see what was needed to make a better set.
Unfortunately, we didn't get the game to a satisfactory conclusion due to the late arrival of half the Russians and the terrain!

We used Ian's Prussians against Lawrence and my Russians...

Phil commanded half the Prussians, and deployed a large force of Kuirrasiers to the right of his infantry. I faced them with a mixed bag of Cossacks, Kalmuks and Serbian hussars. 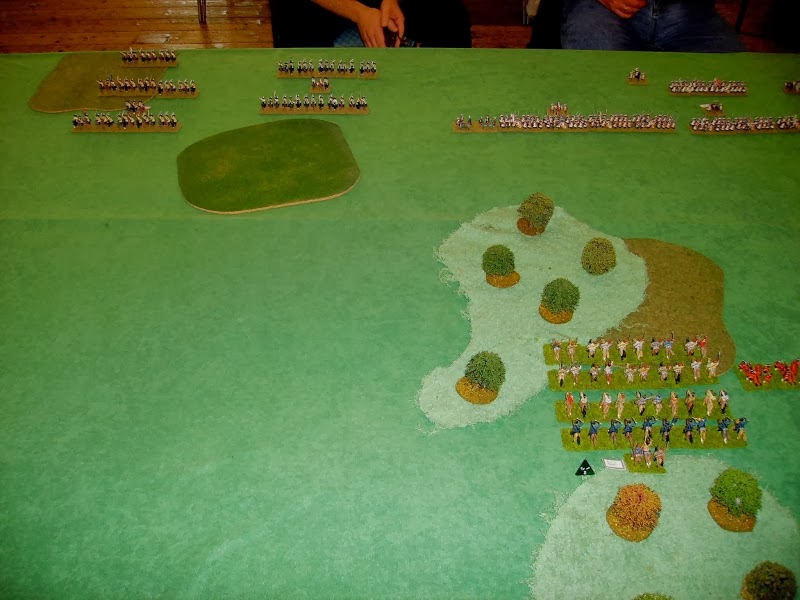 My Cuirrasiers, dragoons and infantry held the Russian left. 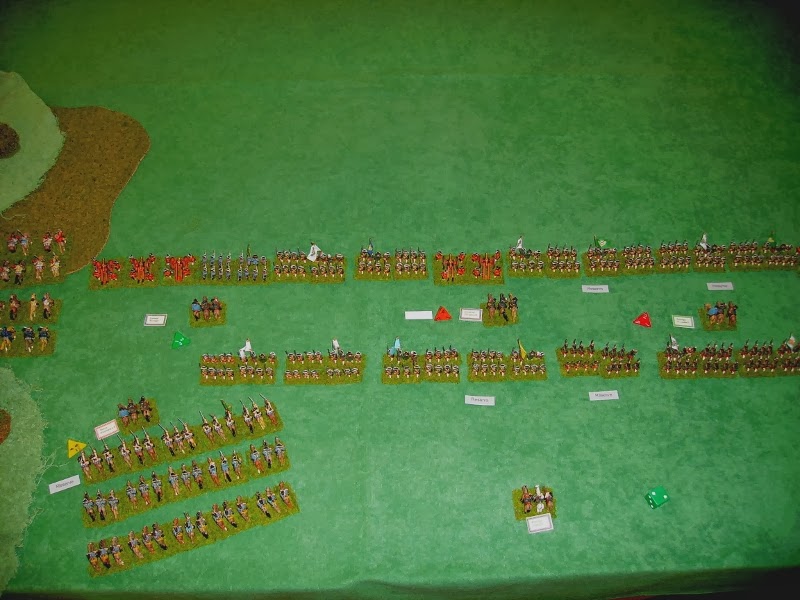 In the centre, the Russians infantry outnumbered the Prussians facing them. 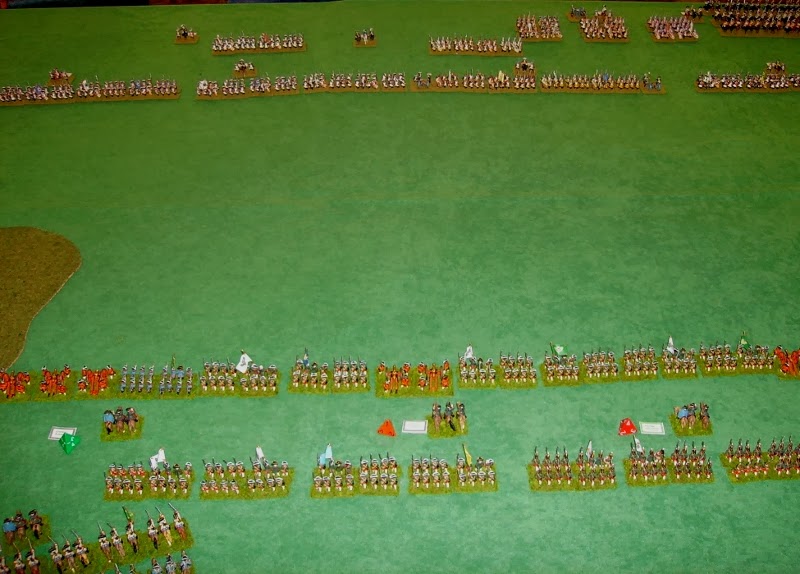 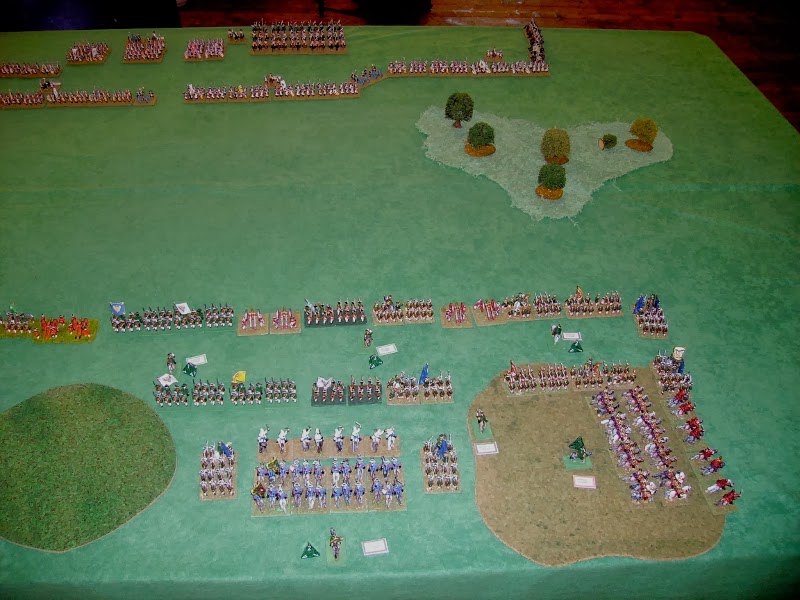 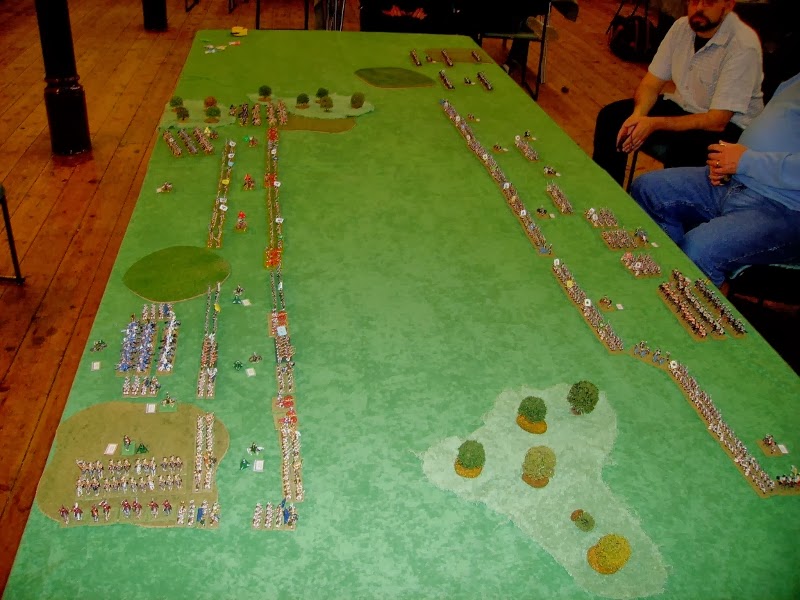 At game start, most of the Russians refused to move, though Lawrence got a regiment of infantry to try to hold a wood in front of the Prussian left. 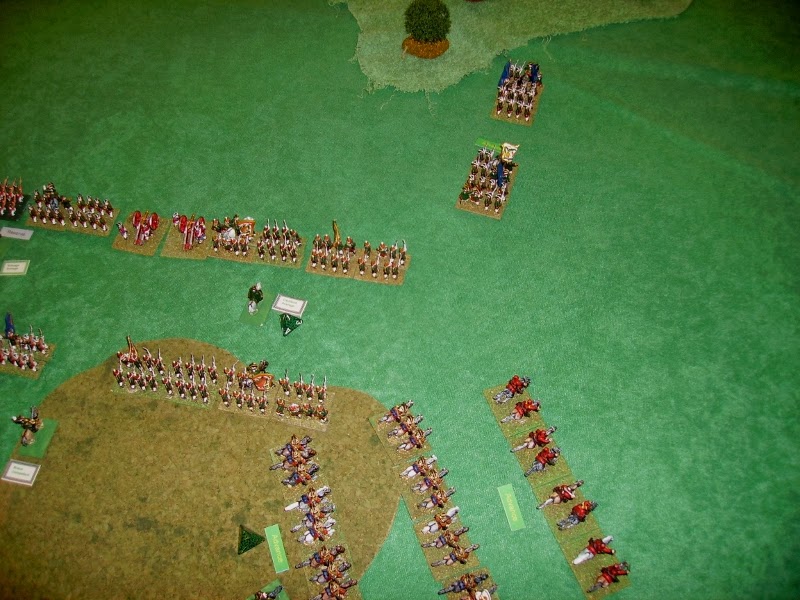 The Prussians facing them countered by bringing their reserve cavalry force to their left. 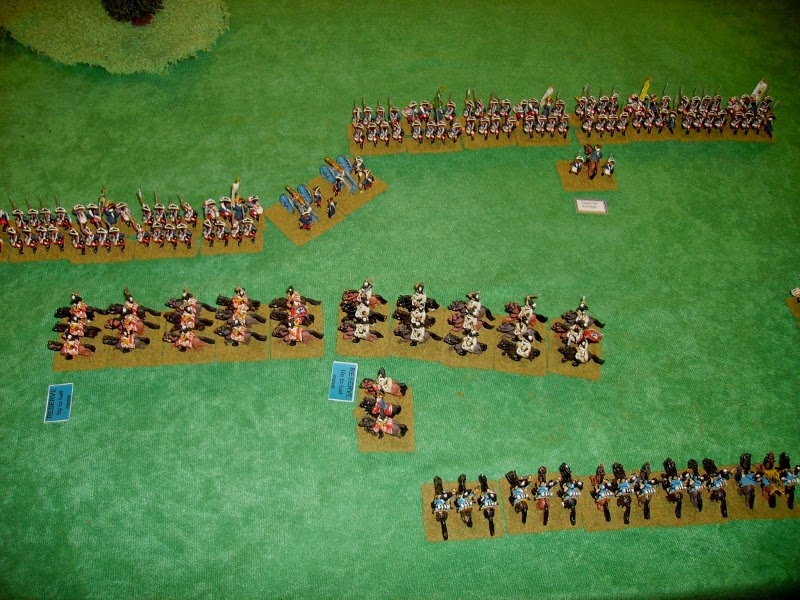 On my flank, Phil's Kuirassiers  also failed to move 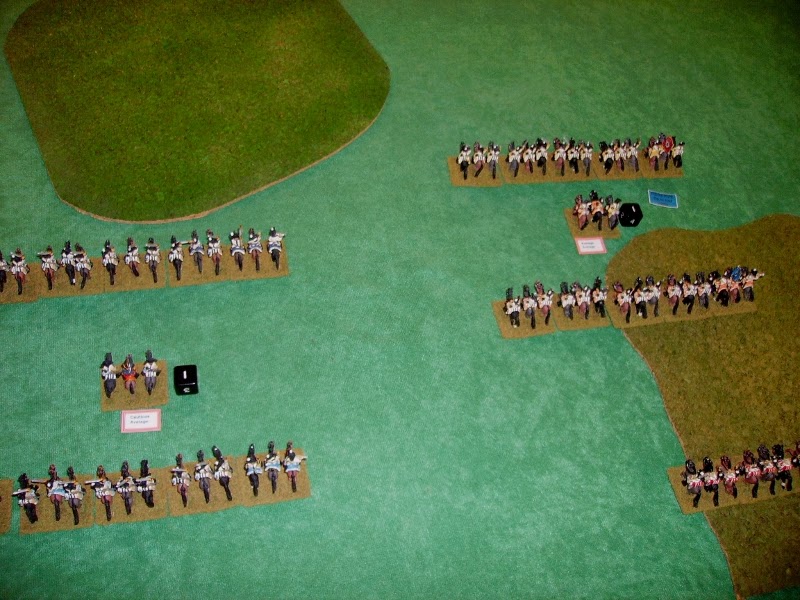 I managed to get my light cavalry brigade to advance into a wood. 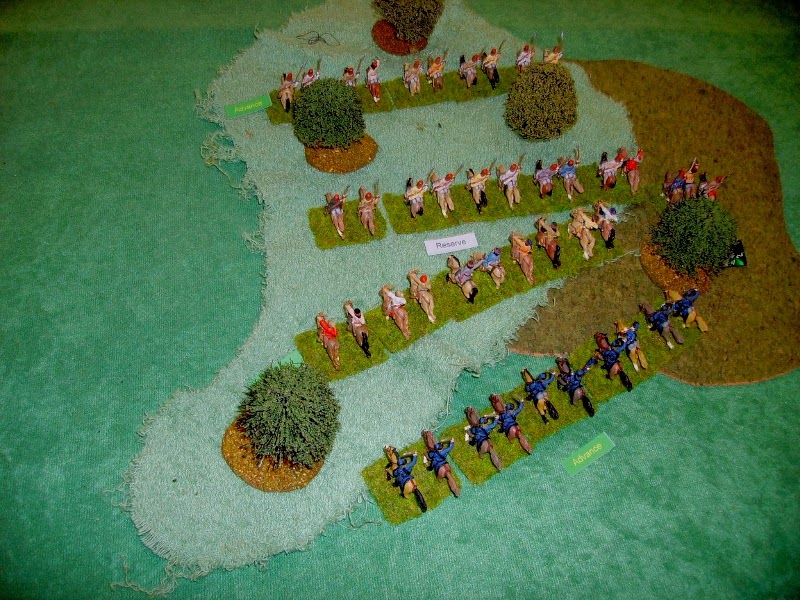 The rest of my cavalry- led by an incompetent brigadier - were unwilling to support them. 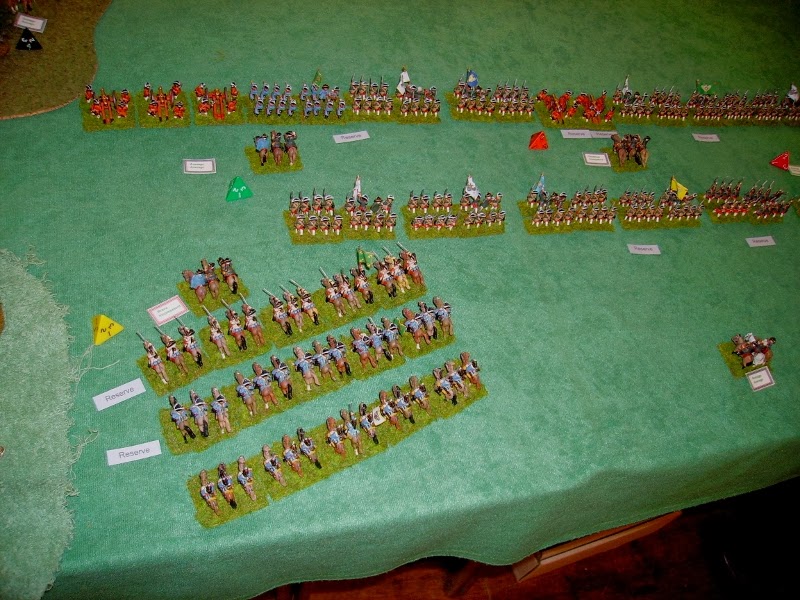 Seeing my lights filtering through the woods, Phil brought some of his cavalry to support his artillery, which my Cossacks threatened to ride down. 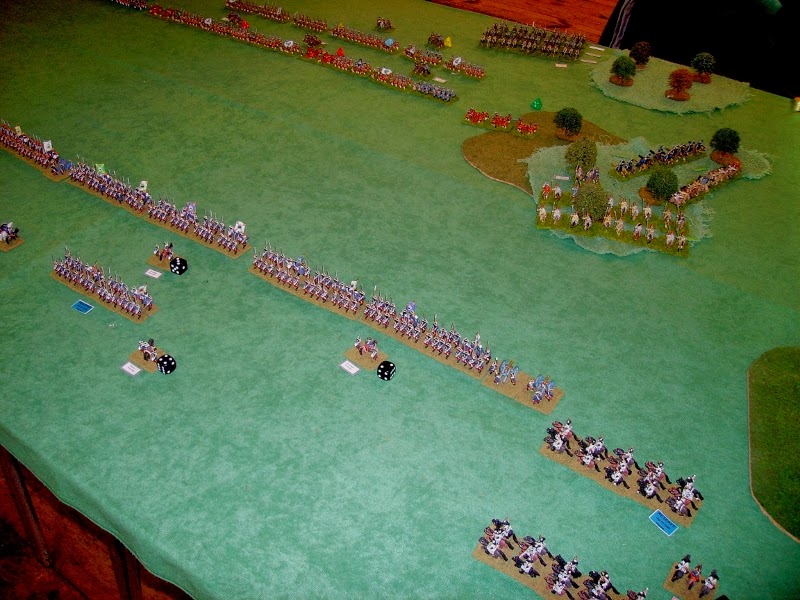 The Russian infantry finally got moving on turn 3, the Prussians waited. 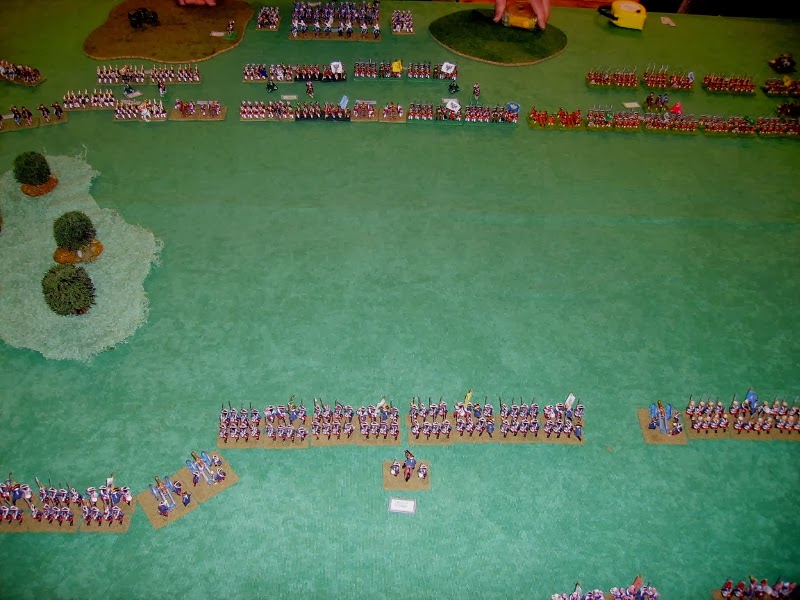 Despite my best efforts, my Cossacks refused to attack due to the unwelcome arrival of the Prussian horse. 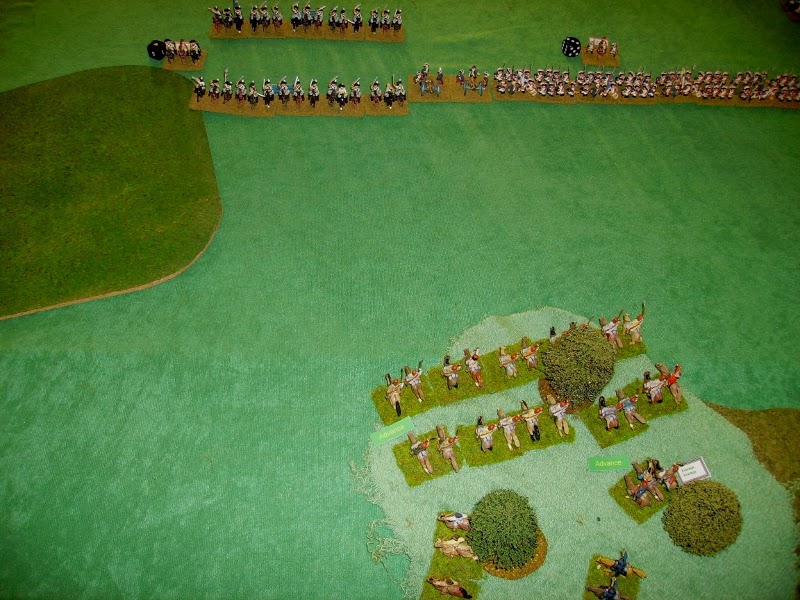 The rest of the Prussian cavalry right began to advance towards my wing. 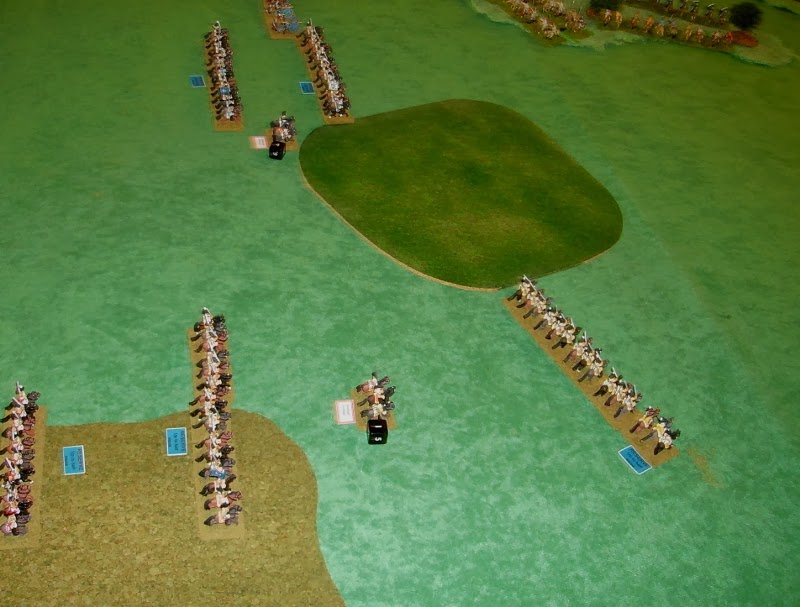 On the Prussian left, their cavalry began to move to attack Lawrences cavalry. 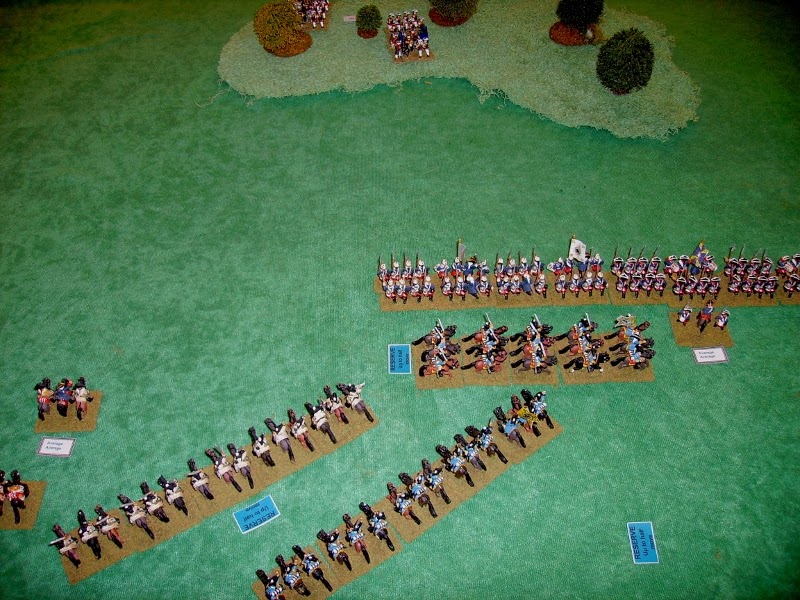 Would the Russians be able to match the mighty Prussian horse? 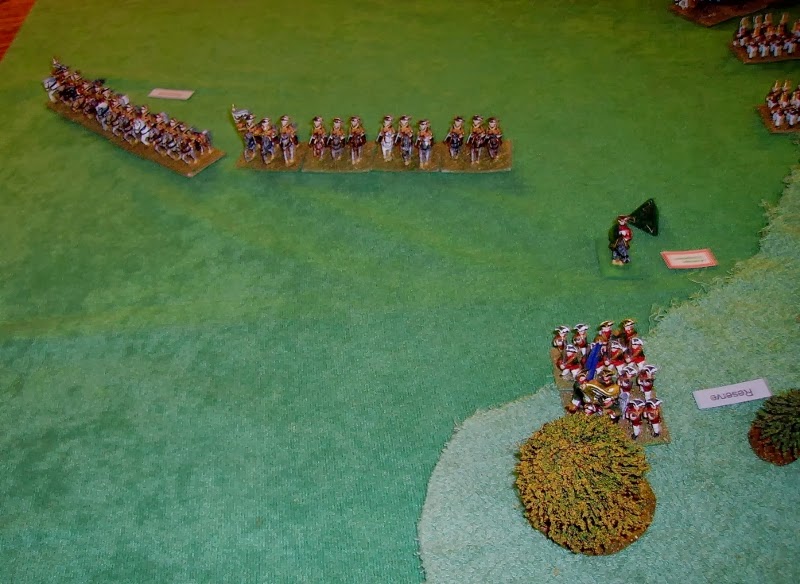 Seeing the Prussian advance, my Kalmuks took a rough hill, supported by the Hussars. 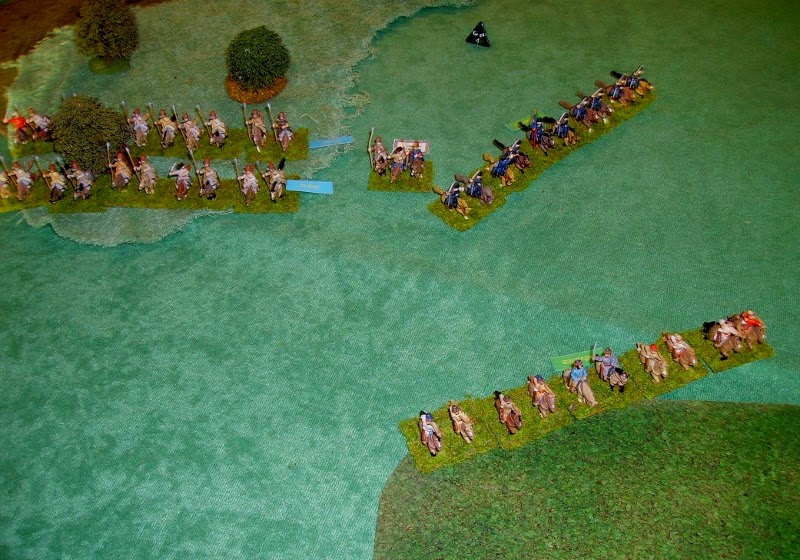 The Prussians opposite decided not to contest this move. 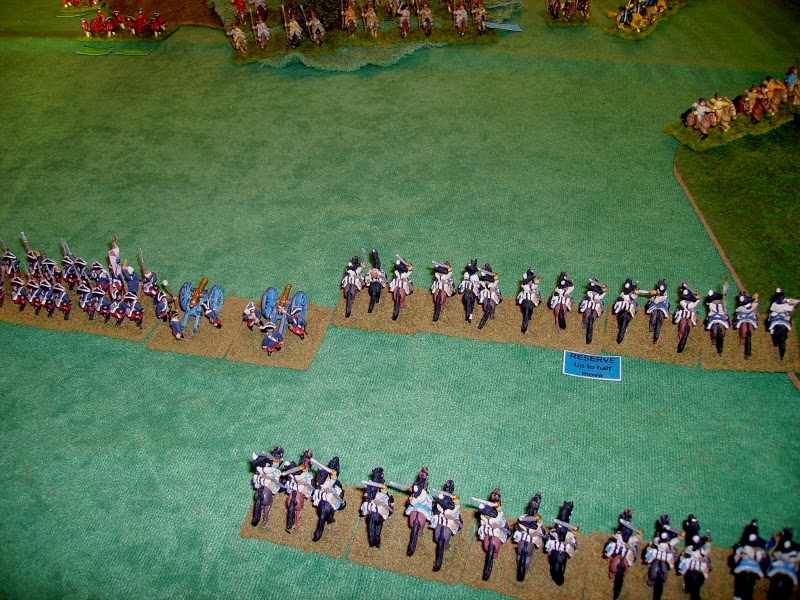 The other 2 regiments swept past the Kalmuks, what would they do? 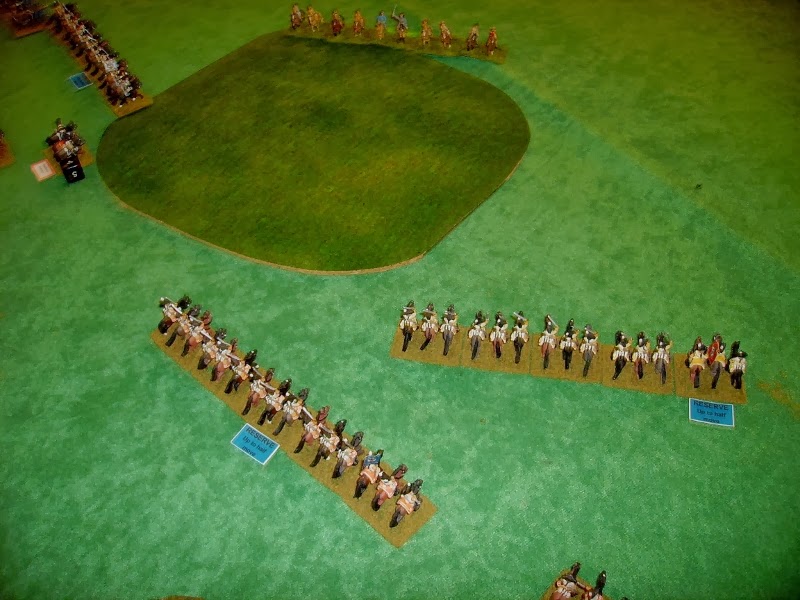 The Garde du Corps  moved to cover my Kalmuks exit from the hill. 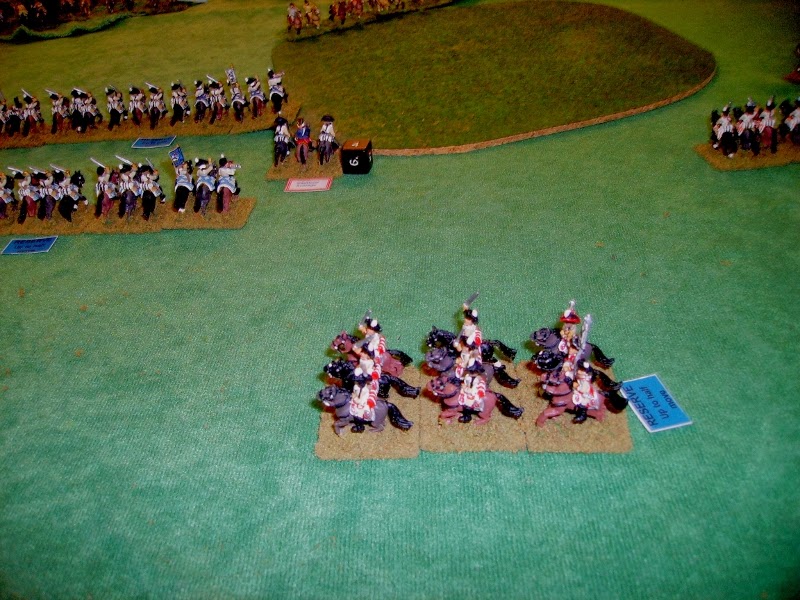 Back on the other wing, the Russian and Prussian cavalry faced each other. 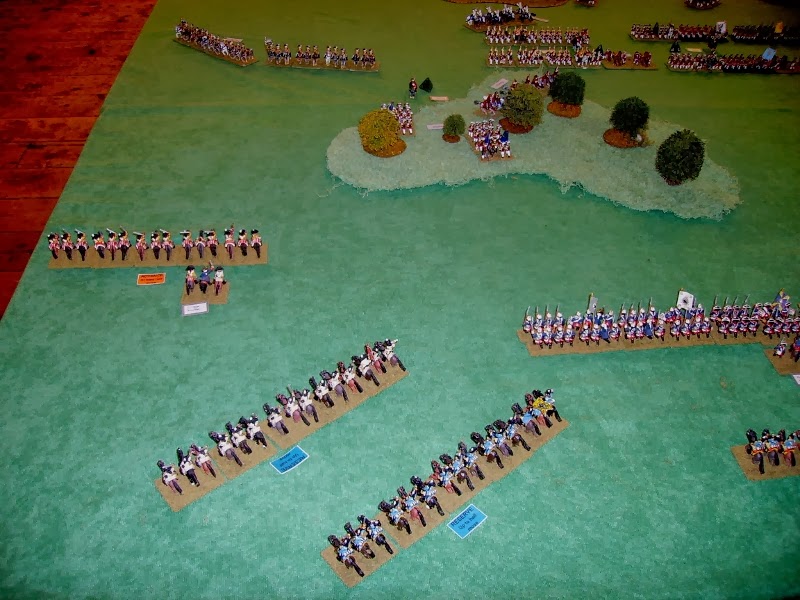 In the centre, my artillery came into accurate range 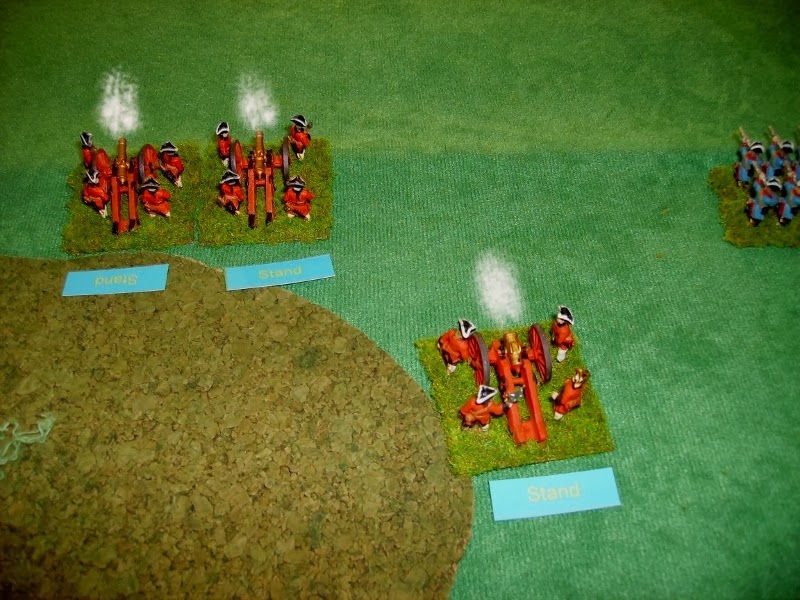 The Prussian infantry, unable to reply, took damage but held. 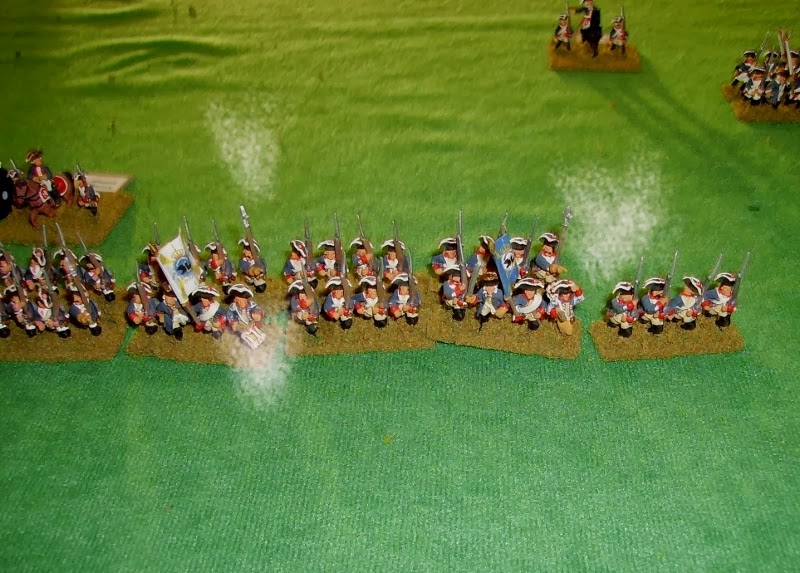 My Kalmuks started skirmishing...the Prussian horse charged, taking losses from archery as they came, but eventually won when the Garde du Corps joined in! 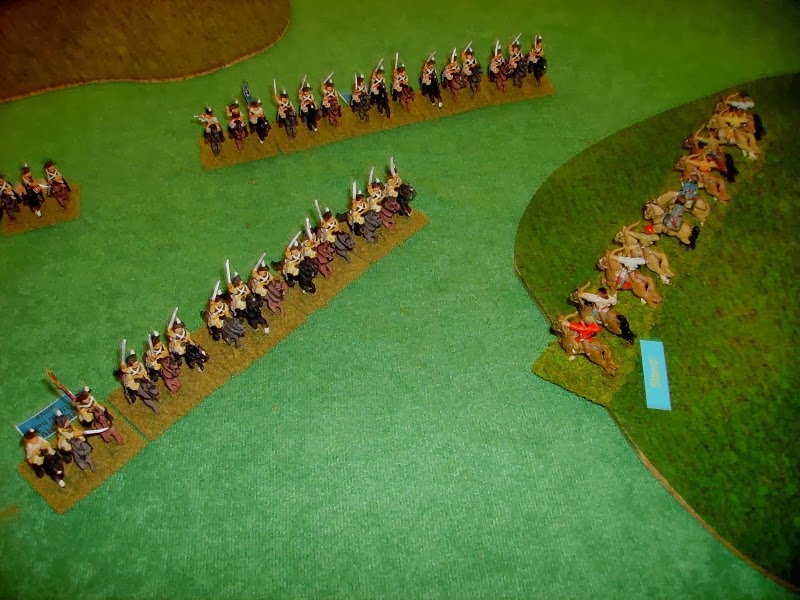 Lawrences cavalry was beaten badly by the Prussians. 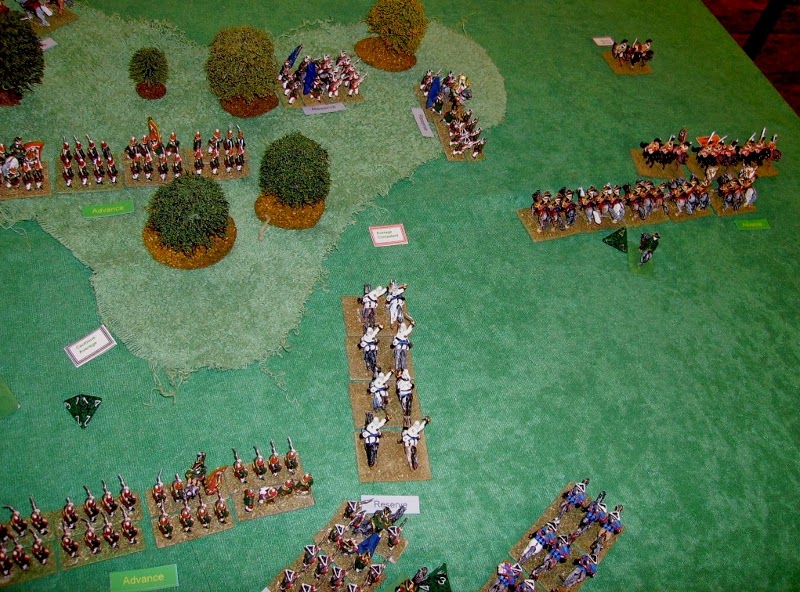 With my Kalmuks routing (they did rally later) - and one of my Cossack units also routed when they foolishly tangled with Kuirassiers, the Prussians were in the ascendancy. 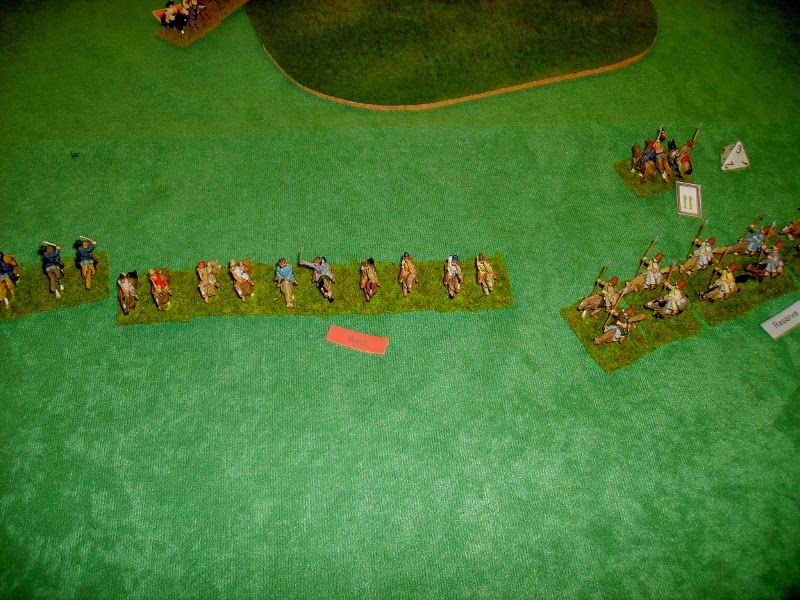 Sadly, we ran out of time here, but I think the Prussians would claim a victory of sorts! - though a lot could have happened if we had another couple of hours!

I enjoyed the game, and it was very helpful in giving me some ideas!
Posted by Herkybird at 22:20