Out of the Chain of Command

Yesterday, my family were up so I was unable to game...again!

Lawrence and Phil therefore had a chance to do Chain of Command, and Phil took some pictures of the game, and even did some text!

Still, over to Phil:

The scenario granted him three support points, which he spent on a 45mm grenatenwerfer with two crew, and a “Shabby Nazi Trick” - more of that later.

I had a three-section platoon of French regulars (with their V-B grenadiers grouped together under the Grenadier-Caporal as a four-man fire team.)
The scenario granted me three support points to spend, plus three to balance the ratings between our forces. Enough for a tank!  Alas, I rolled poorly for my support and was restricted to one-point or two-point options only.
I took a sniper - two ‘Francs-Tireurs’, and a Demi-escouade of Fusiliers, which included an LMG team.

Our table was a maze of thick bocage and ploughed fields, with few long fields of fire and only a couple of stretches of open ground.

The patrol phase - I elected to go with four patrol markers, whereas Lawrence took three. Starting from the long edges of the table, we managed to “turn” each other’s flanks with our patrol markers, ending up deploying more from the short ends.  We both thought we’d done well - Lawrence had more tabletop territory but I had possession of the best cover, including most of the vital stonewalled enclosures which offered the only ‘hard’ cover on the table.

Picture: A Heer section push forward from their deployment point. 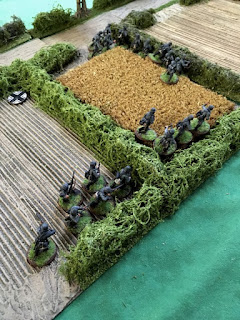 Lawrence’s “Shabby Nazi Trick”: a fifth columnist in French uniform, posted at one of my deployment points to misdirect the gallant Poilus!
Lawrence borrowed one of my own French officers to play the role of the filthy collaborator - talk about adding insult to injury! 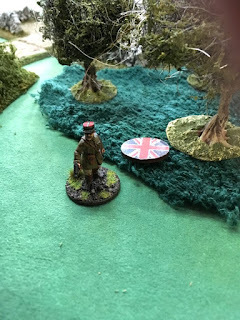 A French ATR proxy-ing as a sniper. Positioned to command a straight stretch of road.
He was to prove marvellously elusive, and his presence kept the Boche cautious, but I never got the activation rolls to actually get him shooting! 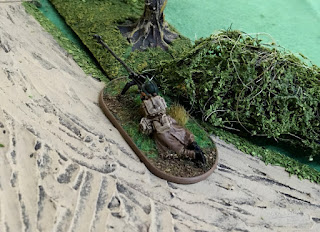 On the French second attempt to bring on forces at the fifth-column controlled deployment point, they succeeded! His cover blown, the collaborator flees back to his jackbooted masters. A bright future awaits in the Vichy state! 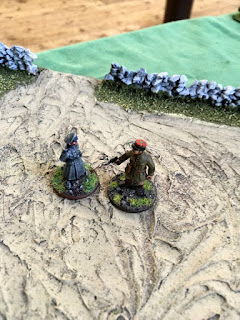 Les Francais move to garrison “the redoubt” - a stone-walled enclosure in a commanding central position, controlling the road junction.
There was actually a German deployment point right next to this field - but Lawrence was prevented from using it by my ‘Francs-Tireurs’ support option. Like the “shabby Nazi trick”, this option prevents a player using the deployment point (due to actual harassment by, or fear of an ambush by, Francs-Tireurs irregulars.)
Unlike the “Shabby Nazi Trick” which was rumbled at the second attempt, Lawrence rolled poorly in his attempts to counter the Francs-Tireurs and they remained in effect for the whole game.
This was tremendously fortunate for the French - a German section appearing as they poured into the enclosure would have shot them like fish in a barrel! 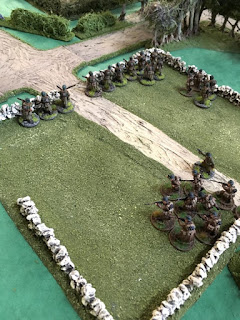 On the French left, the grenadier detachment, under the leadership of the platoon sergeant, move to try and bring the German deployment points under fire. 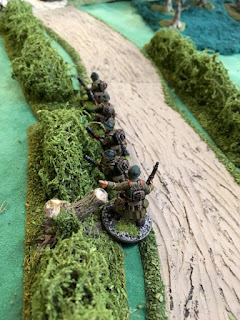 This was typical of our respective dice-rolling on the day:

Lawrence’s (black) dice: note that his entire force contained only one team - the granatenwerfer - which could be activated on a ‘one’.  Even the German advantage of a extra command dice (Red) made little difference.

In contrast, my French dice (white) were FORMIDABLE!
In Chain of Command, a double-six gets you an extra throw of the command dice - effectively, a double go.
Lawrence failed to get one all game.
The one shown below was my second of an astonishing FOUR. 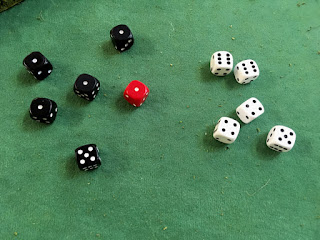 The calm before the storm...
A French section musters to go ‘over the top’ and brave the open ground to close with the German deployment points.
In the background, the leading Heer section approaches the hedgerows from which they will assault ‘the redoubt’ 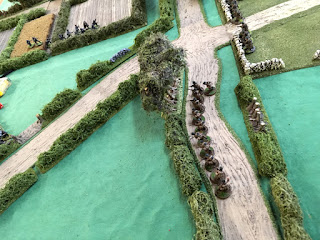 Growing frustrated with slow progress across the ploughed fields, a German section braves the open road... easy meat for the French sniper, if I could only roll to activate him! 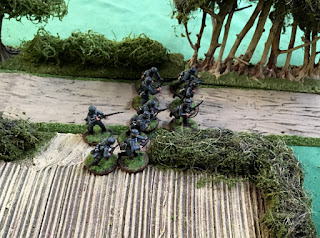 Shooting through letterboxes!
Using a v-e-r-y narrow line of sight, the German granatenwerfer fired with very disappointing lack of effect into the French-held stone-walled enclosure.
All it achieved was to provoke return fire from a couple of French riflemen, to much better effect... 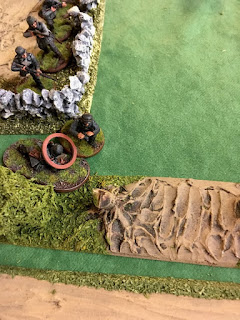 The high tide of the Axis!
A section has successfully worked its way down the hedgerows on the French flank.
Because the sniper hasn’t fired, the Boche have no idea he’s there!
Can I roll to extract him before they overrun his position and he’s lost? 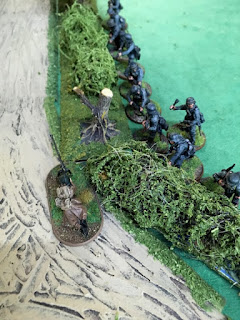 The German senior leader moves to try and remove shock from his forces as they come under increasing fire. 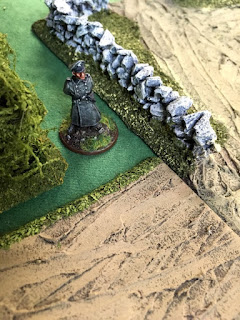 Disaster!
The German ‘Chain of Command’ dice reaches six, and in an inspired move, Lawrence elects to spend it to move a deployment point.
The French attack is midway across an open field when the hedgerow ahead of them suddenly erupts with fire! 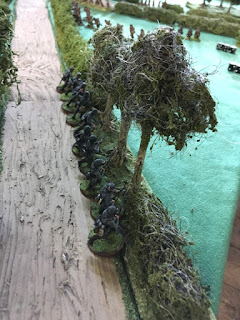 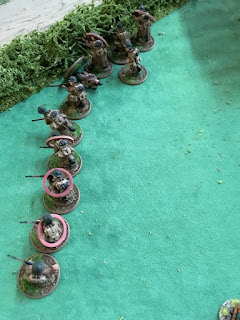 In the centre of the field, the main German assault finally grasps the nettle and tackles ‘the redoubt’.
The ‘extra’ French LMG from their supporting Demi-escouade proves decisive and the Jerries are mown down! 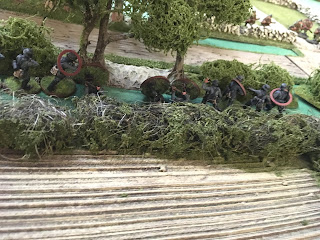 The attackers, on the other hand, couldn’t hit a cow on the bum with a banjo. 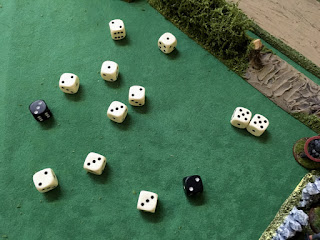 The lone survivor of the German assault breaks and runs for it... passing his Leutnant, who thanks his lucky stars there is, as yet, no such thing as The Russian Front. 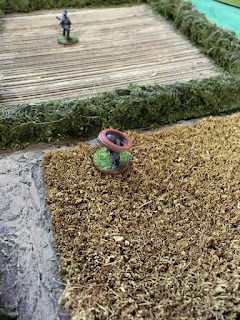 Having broken the assault against them, the French sections in the stone-walled enclosure now have a clear field of fire down the road, and can bring overwhelming long-range enfilading fire to bear on the Heer section who are busy massacring the French flank attack. 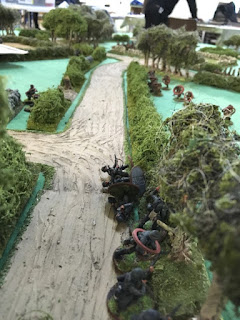 The Boche are a spent force.

Two sections broken, their remaining forces are at opposite ends of the table, unable to support one another, and neither element strong enough to mount an attack alone.

The bulk of the French forces are intact, and nicely warmed up. The shot-up section is under so much shock it’s effectively unable to act, but the rifle grenadiers are finally in a position to add their fire to the onslaught.
Opting to extract his remaining forces in good order, Lawrence calls the game at this point.

In retrospect, I think the “Francs-Tireurs” and “Shabby Nazi Trick” support options ought to be limited to one per player. I had six support points - I could have “Franc-Tireured” every one of Lawrence’s deployment points twice over. It has the potential to be a real game-spoiler.

Speaking of which....
The double-six, have another go, mechanic is fun, unpredictable, and a nice little bonus - IF it appears sparingly and even-handedly.
When one player scores four double-turns in one game and his opponent fails to get one, then it comes to dominate the scenario and effectively decides the outcome, regardless of what the players do.
I’m not proud - I’ll take a French victory gladly.
But I do feel that today I could have taken on 27th (Penal) Panzer using the Walmington-on-Sea Home Guard, and come out on top because of those four double-turns.