Today, we tried my old Seven Years War rules, with the hope that they might be suitable for a future imagi-nations campaign. We had not played them for a few years, so it was a bit like learning a new set!
I had a Prussian force, Lawrence had my old Franco-Reichsarmee army.
Phil was given the Reichsarmee and Lawrence stuck with the French.
As stands, the system gave me a more than average chance of getting initiative, and so it proved! This meant the French got choice of table side, but deployed first, and as I diced so well, I also got the chance to deploy in the flank sectors of the deployment area.

I put Von Seydlitz and a strong cavalry wing facing the Austrian horse, the infantry was strongest facing the Reichsarmee, too. No question where my attack would fall! 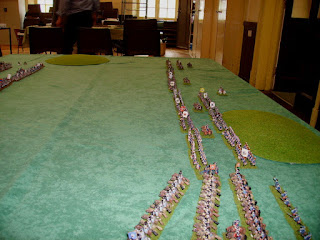 Phil had 2 regiments of Austrian Kuirassiers and a regiment of Hussars screened by the Hesse-Darmstadt and Blau-Wurtzburg infantry. 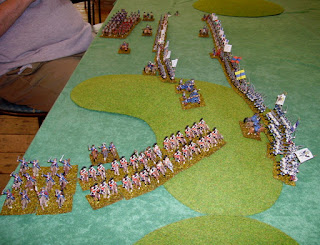 The French deployed in 2 full lines, with their horse behind, ready to deploy. As I had no intention to attack his infantry, my own line was thin. 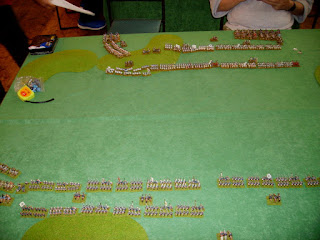 The Reichs artillerie began firing as Seydlitz advanced towards the Austrians, fortunately for me, their fire was inaccurate. 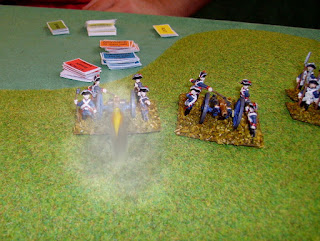 On the other wing, the French cavalry began to deploy against my weak right wing horse. The French artillery was out of effective range. 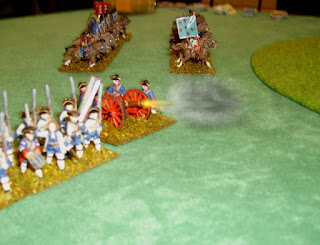 My right wing horse was only 2 units, a Kuirassier and a Dragoon regiment. I advanced them rapidly, hoping to get the French cavalry while they were still deploying. 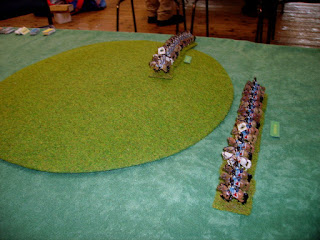 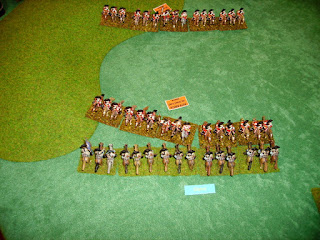 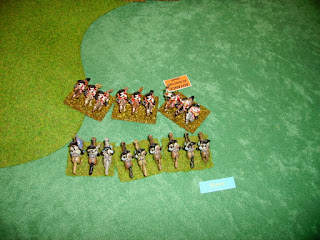 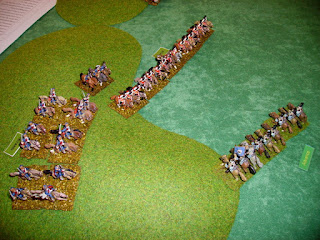 ...got swept away in the pursuit.

On the French wing, my Kuirassiers drove off one regiment of Cheveux-légers, despite a second regiment moving up in support. 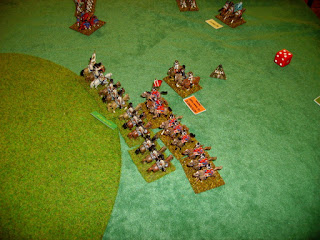 The French wing seemed in disarray with units moving all over the place! 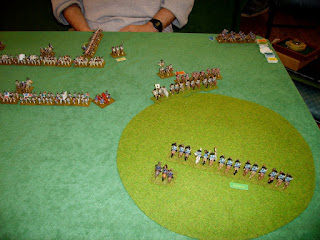 My Kuirassiers broke the second French unit and pursued them. 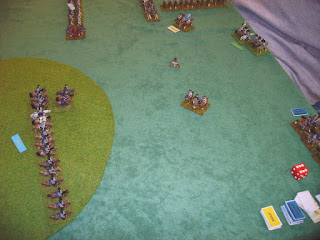 Lawrence had a Cheveux léger regiment covering his flank... 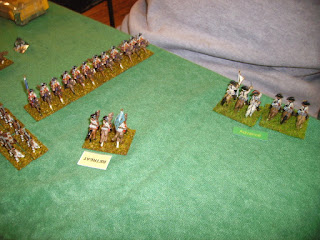 ...these charged and chased my winded Kuirassiers off table. 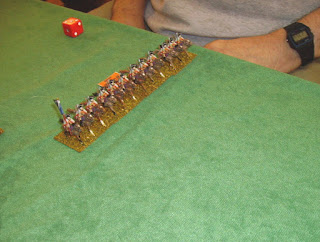 My supporting regiment of dragoons now came under fire from a battery of French artillery. My dragoons decided to retreat back to their infantry! 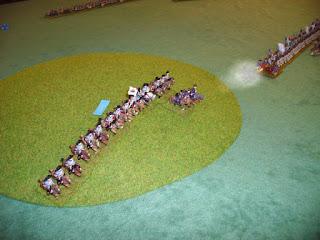 On the Prussian left, the Austrian Hussars were threatening my victorious Kuirassier regiment's rear, so I sent forward my Frei-korps to dissuade them! 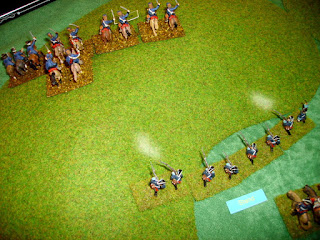 My Grenadier brigade now engaged the Hesse-darmstadt and Wurtzburg regiments. My first volleys tore holes in them, Hesse-Darmstadt broke, but the Wutemburgers held.
Further down the line, the poorer Reichs infantry, supported by their artillery, actually drove back a Prussian regiment! 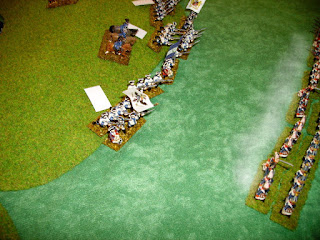 No matter, I surrounded the Hussars and had my left wing wheeling onto the flank of the Reichsarmee. 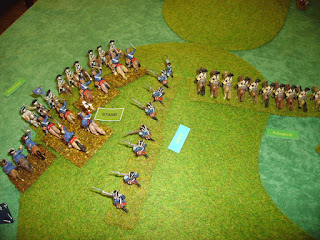 The French commander signaled the retreat! I felt sorry for poor Phil having to face the best of the Prussian army with a less than stellar army, but...this is war!. Phil can be proud of his brave defence!

We discussed the game after and decided if I review the rules, and simplify them a bit, they may well work for the forthcoming campaign.
Posted by Herkybird at 18:21