Today, we tried out Beneath the Lily Banners rules, using the figures for the period we had, a rather mixed bag it must be admitted!
Phil brought his Turks, Ian provided the Austrians and some Danish which he lent to the Turks to balance the game.
All the troops were graded as Bullet Horse, Rank firing Infantry, Field gun, while the generals were all competent.

The terrain was minimal, and randomly placed, which, of course meant it all ended up on one side of the table! 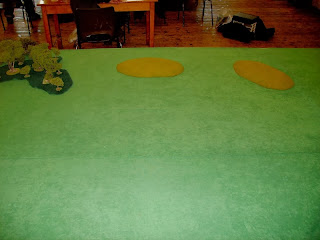 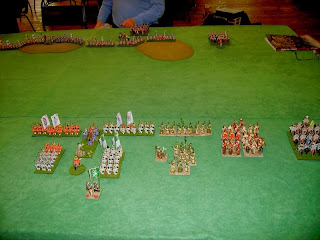 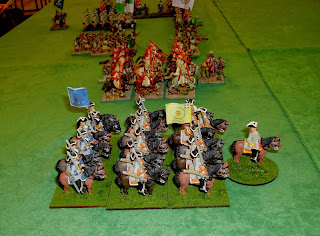 Ian and Lawrence had an Austrian Infantry brigade each in a long line. 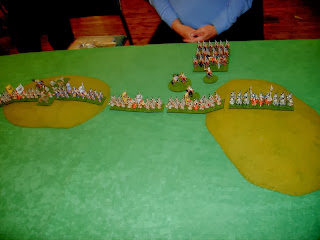 I was given command of 2 Austrian Kurassier brigades, one on the wing facing the Turkish horse, the other (to my mind curiously) - behind the foot. 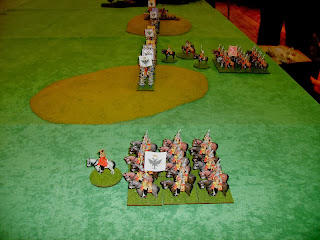 Due to the alternating deployment, our force was offset from our opponents. 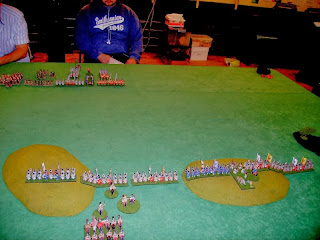 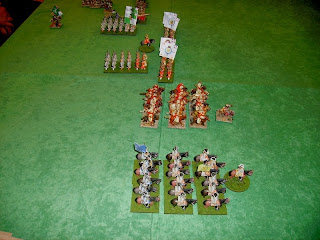 Poor command rolling meant only our right advanced to outflank the Danes. 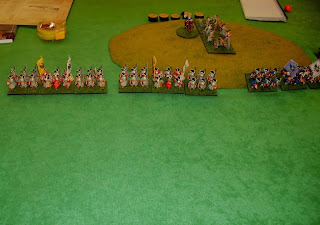 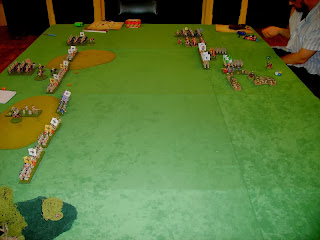 Unable to advance my second brigade, I advanced my flank brigade to face the 2 Turko-Danish ones. 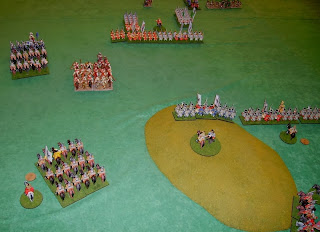 Lawrence managed to rotate his gun to enfilade the enemy infantry. 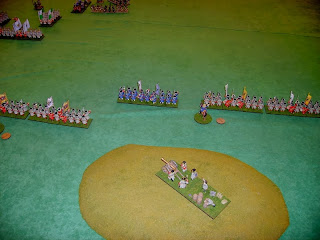 The Danish foot advanced on Ian's Austrians, who remained on their hill. My Kurassiers looked likely to be swept away! 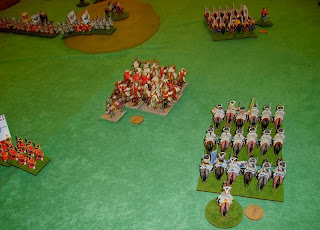 An 'All or Nothing' charge by the Turkish horse smashed into my lead squadron, which failed to counter-charge and stood to receive. 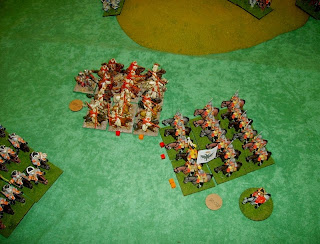 The survivors burst through the following squadrons in a forced retreat. 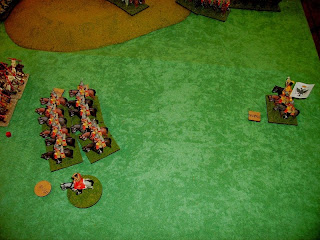 My second brigade charged a squadron at the Turks, and their lead squadron counter attacked, disordered. 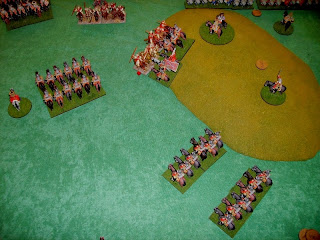 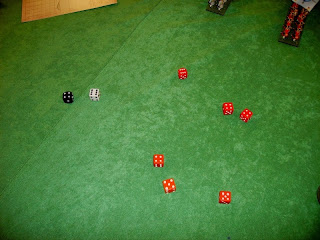 The Turks were wiped out! 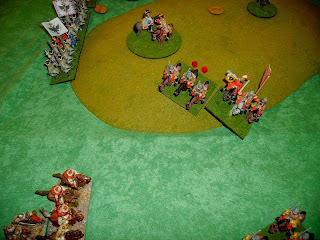 The Turks charged another squadron forward, and a Danish one went against my 'All or Nothing' Kurassier charge. 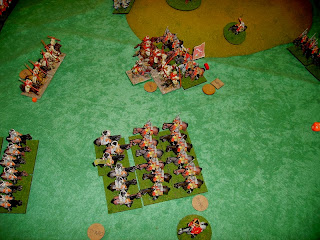 Meanwhile....
The Turko-Danish foot began to deploy and engage Ian's foot with musketry. 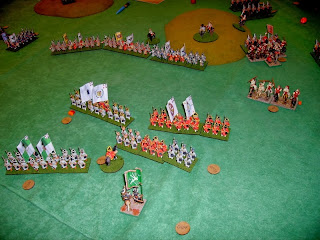 Lawrence's infantry were taking a long time getting into action. 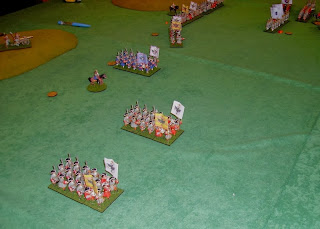 My cavalry were again victorious! 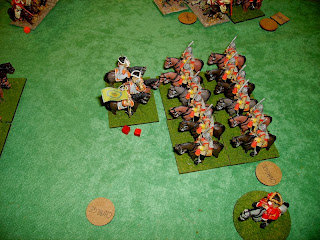 ..though my disorganised squadron on the hill was routed! 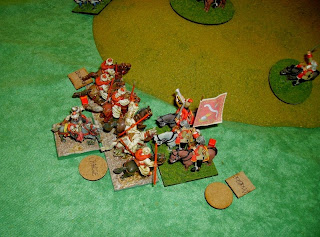 Both sides now only had 4 squadrons left - but it looked that I would eventually win this attritional cavalry battle by this stage...with 1 squadron remaining! 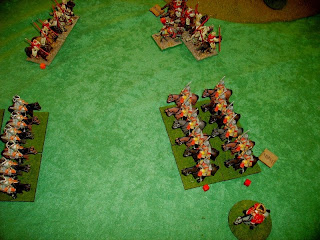 A critical point occurred, the Danish horse failed to charge my disorganised horse, allowing them to reform. Another of my squadrons rode in to disperse the Turkish horse on the hill. 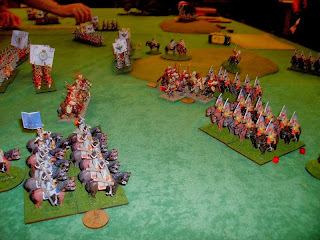 I was finally getting a coherent line! 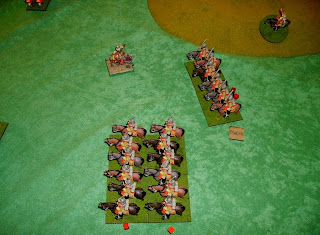 The Danish horse didn't fail their 'All or Nothing charge' a second time, and my horse decided to stand and receive again! 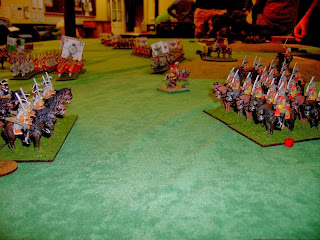 The squadron the Danes hit was wiped out! - the last Turkish horse squadron curiously ignored my cavalry and tried to attack the flank of the Austrian infantry. 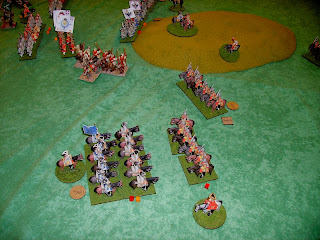 My Kurassiers routed them in short order!
Meanwhile,  The Danish foot were closing with the Austrians, casualties were heavy! 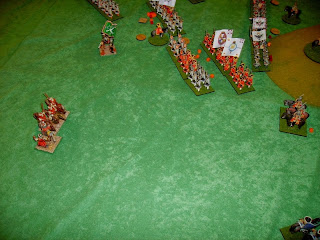 Finally, the Austrian foot were victorious and the Danish infantry retreated, and conceded defeat. 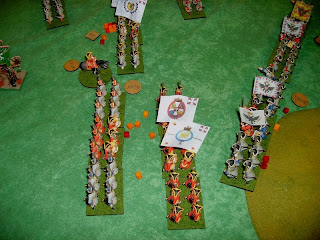 All in all, despite having to try and make sense of some rules which were less than clear, we were quite happy with the rules, and will surely try them again.
Till then, I have lots of Franco-Bavarians to paint up!
Posted by Herkybird at 00:30