This game was played a couple of weeks ago but I only just got round to uploading the pictures!

The French army, with a small Reichsarmee contingent (a la Rosbach) deployed in open ground at the end of a valley, the weaker Reichs troops hiding behind a wood and hill on the right. 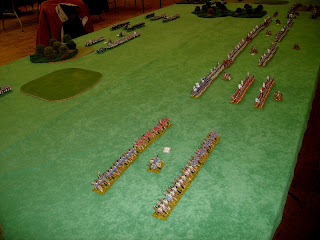 The Prussians, unable to form a solid line in a position to engage the French, left a holding force to their front... 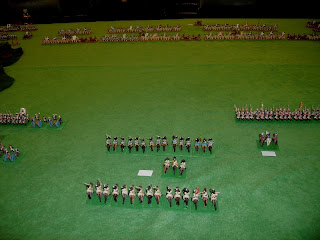 and put 2 attack columns, one on either wing. The right had most of the cavalry... 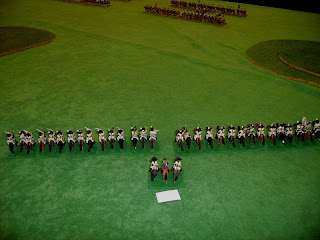 while the left, facing the hidden Reichs troops was mostly infantry, with a single regiment of Dragoons and 5 squadrons of hussars.

The battle began with the Prussians right wing cavalry, supported by infantry battalions, launching a massed attack against the French horse facing them... 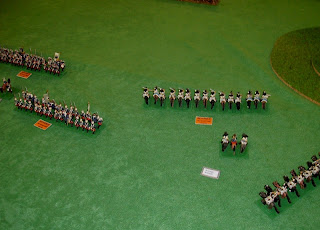 The French horse panicked and withdrew behind a wall of Swiss mercenaries, who were unimpressed and proceeded to fend off the Prussians for the remainder of the game. 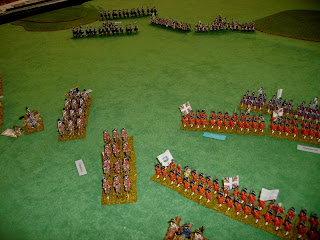 On the Prussian left, the Reichsarmee, after firing a couple of artillery rounds at the advancing Prussian hordes, fell back from their hill and set up a shorter frontage anchored on the woods further back. 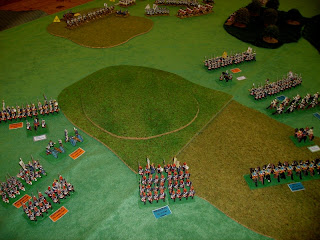 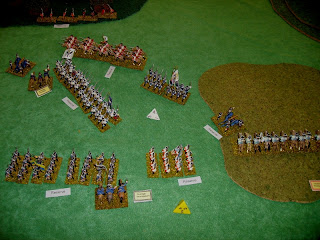 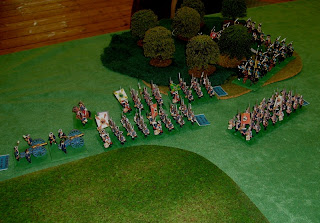 Seeing the flanks being attacked, the French infantry in the centre attacked the weak force facing them, but barring a regiment (which gave the advancing French a very bloody nose) the Prussians marched rapidly to either flank, leaving the French advancing into a void.

The battle though was to be decided on the French right, where true to form, the Reichsarmee infantry - despite having the excellent Hesse-Darmstadt and Blau Wurtzburg regiments in the front, backed with Franconian militia, broke and fled before the first volleys from the Prussians. 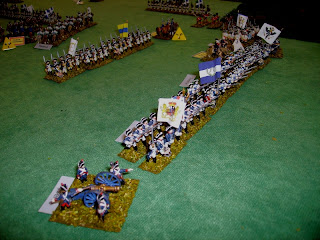 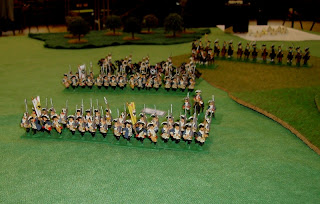 Seeing the hopelessness of his position, the French commander - seeing another Leuthen looming decided to leave the battlefield.

Neither side took massive losses, and was won by manoeuvre.

Perhaps the Prussians had a Condottiere in command!!