Return to the Wars of the Roses.

Today, we got our Wars of the Roses figures out again to try my newly modified medieval skirmish rules.

The new lists made a large difference to our usual army composition, and we all had to deploy large numbers of men-at-arms.
Ian had his usual Yorkists, and I my Percies. Lawrence was detailed to be on my side this time.
Phil deployed his De Laceys, but (treacherous dogs!) they sided with the Yorkists.

Ian deployed on a large hill. His force was well armed and armoured. 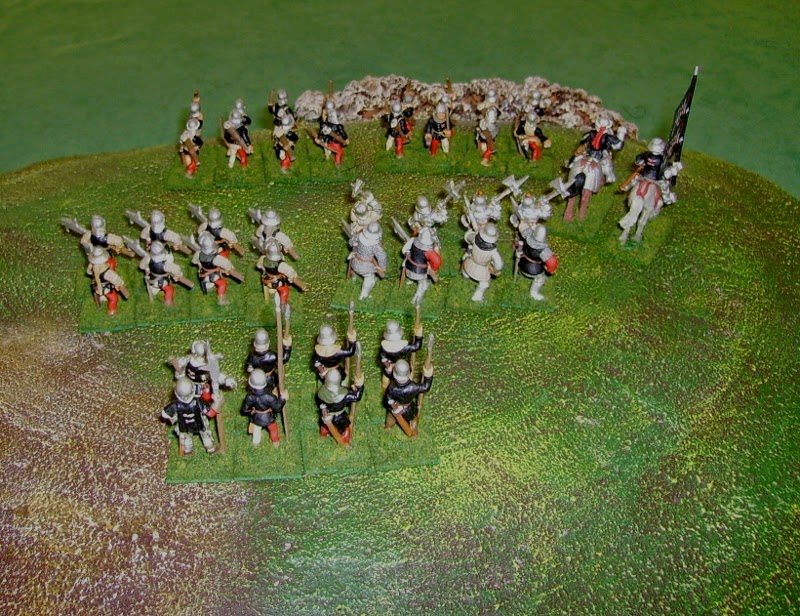 Phil deployed his few archers behind a line of men at arms, with crossbowmen on a rocky outcrop on his right. These too were well armoured. 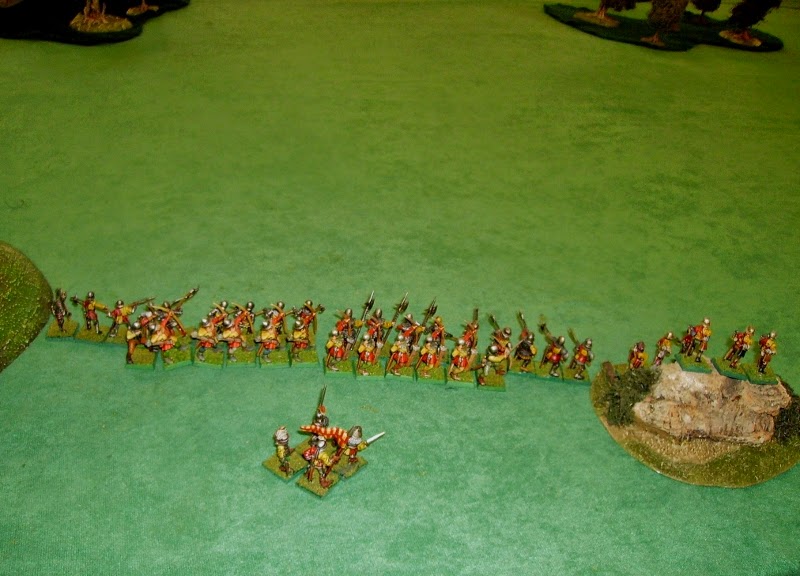 I deployed on the Lancastrian left, I had lightly armoured troops apart from my 10 armoured retinue archers and my 2 knights. 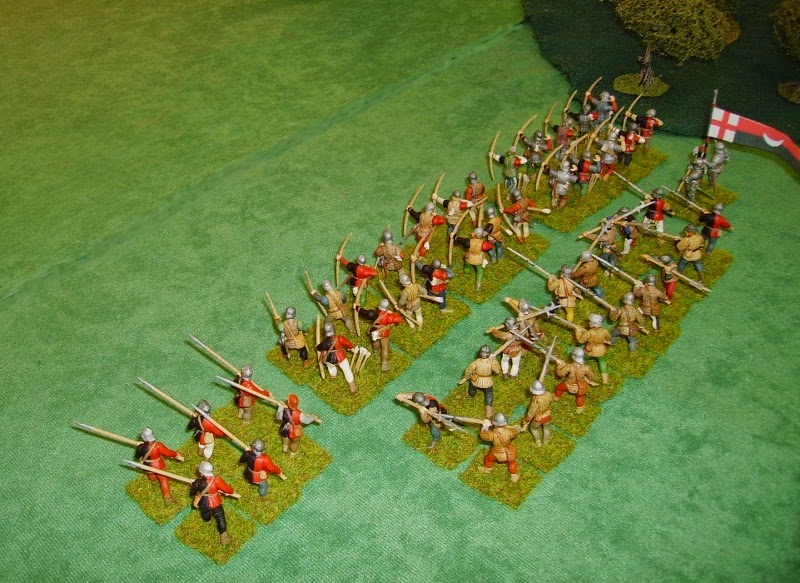 lawrence was hidden from the Yorkist bows behind a wood. He had some unarmoured archers with well armoured billmen and a strong mounted contingent of knights and mounted sergeants. 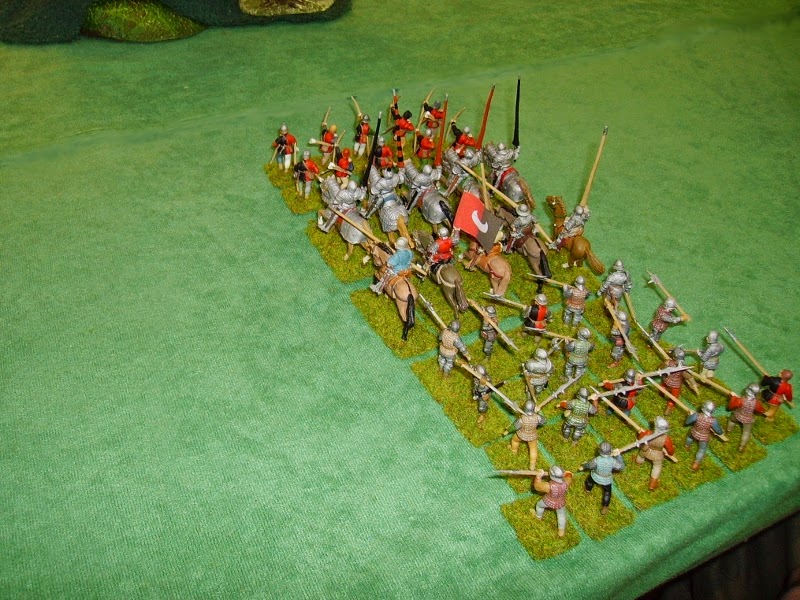 My men began a rapid advance round Phil's flank, out of range of his bowmen. 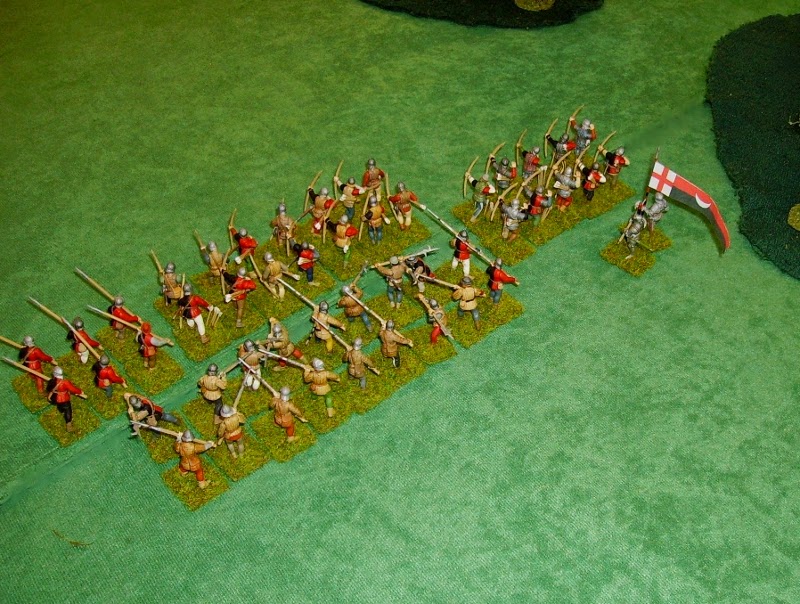 I detached my armoured troops towards a wood in front of Phil's position. 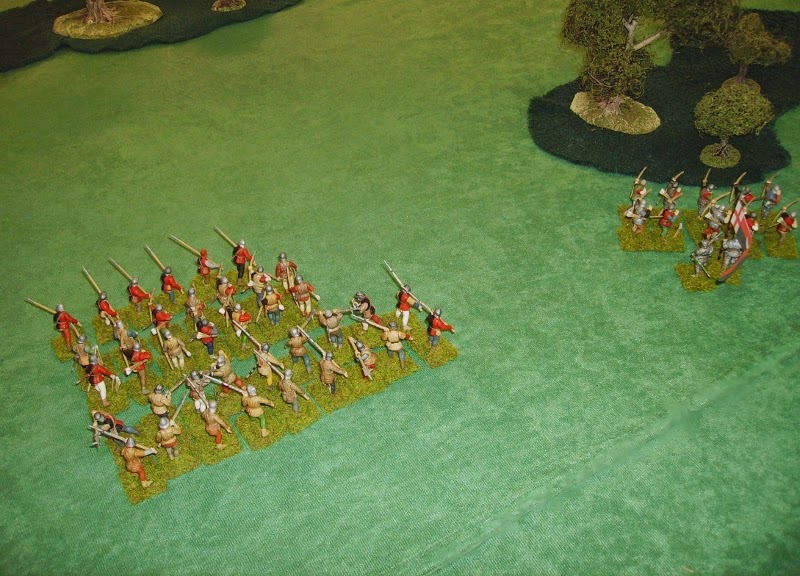 Lawrence sent his archers into the wood in front of his position. 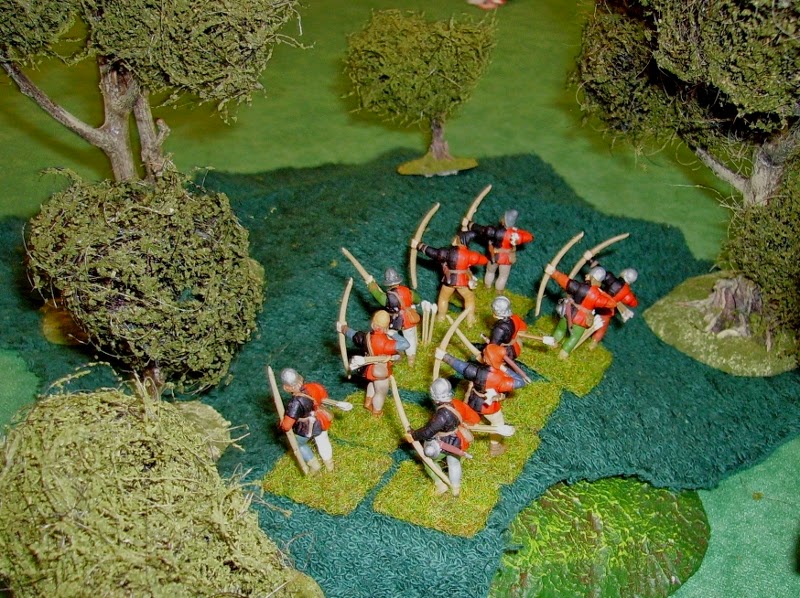 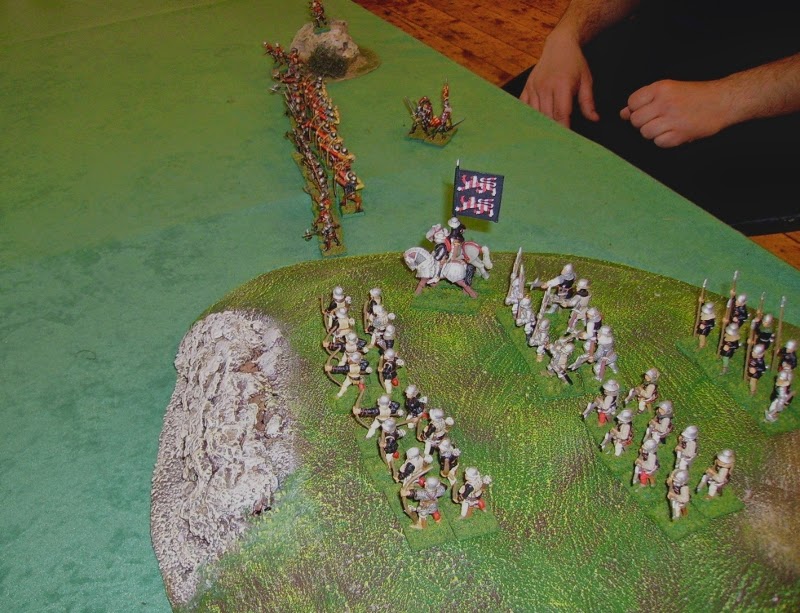 Lawrence's bills went into the wood too, in support of his vulnerable archers. 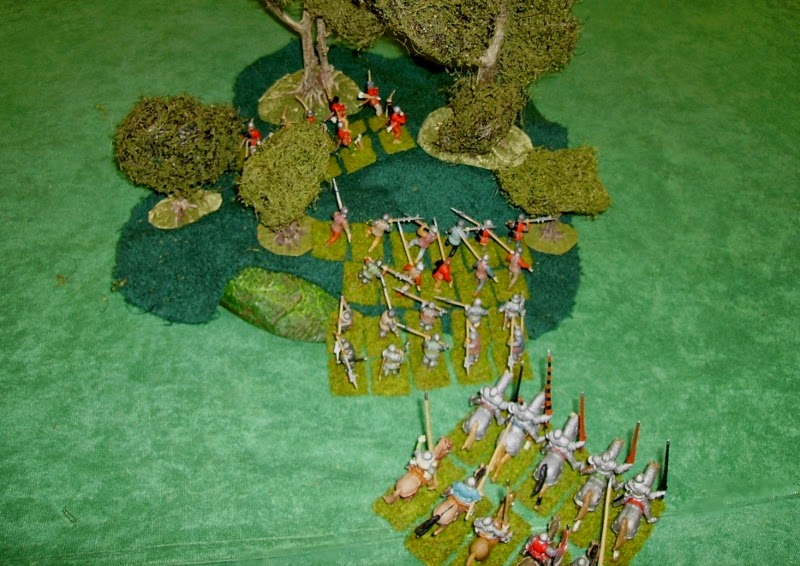 My men at arms approached a wood on the right of Phil's position, though now in range of his bows, I was screened by the wood. 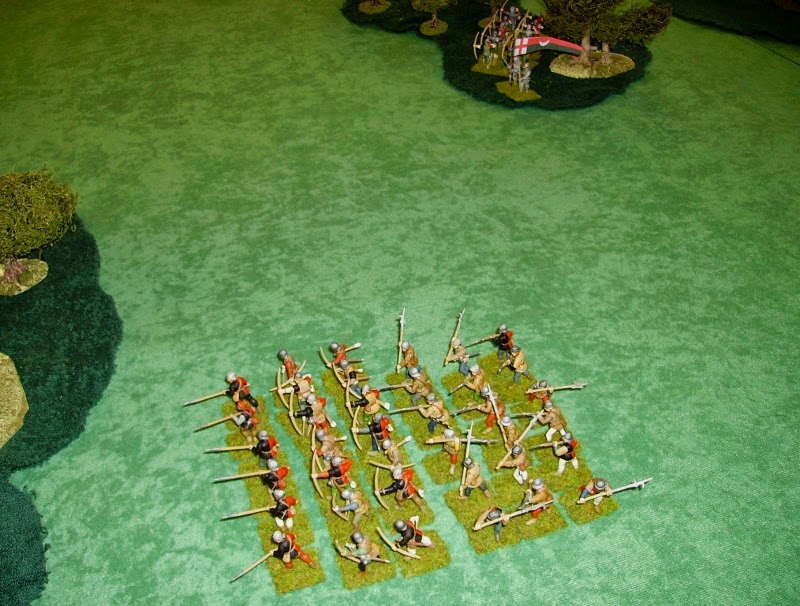 Lawrence had his archers in position, largely screened from Ian's bowmen, having agreed to support my attack on Phil's De laceys. 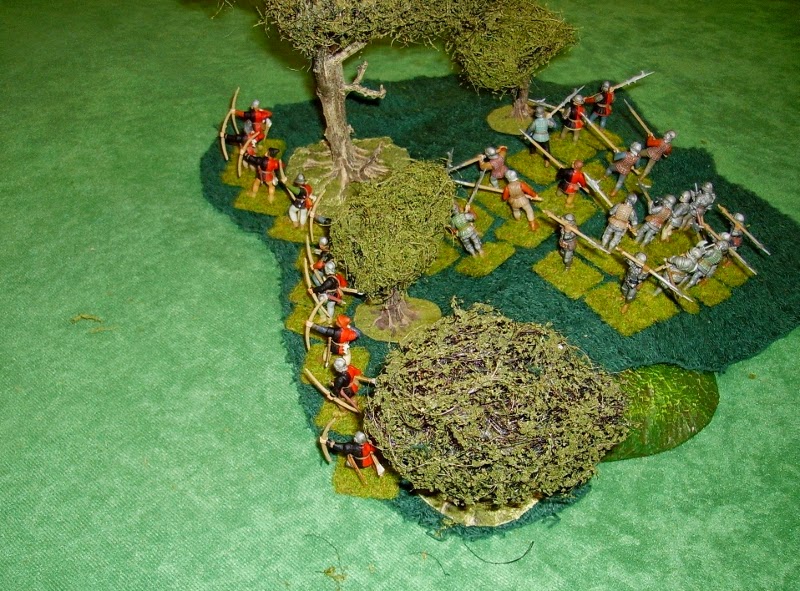 I was filtering into the wood by now. 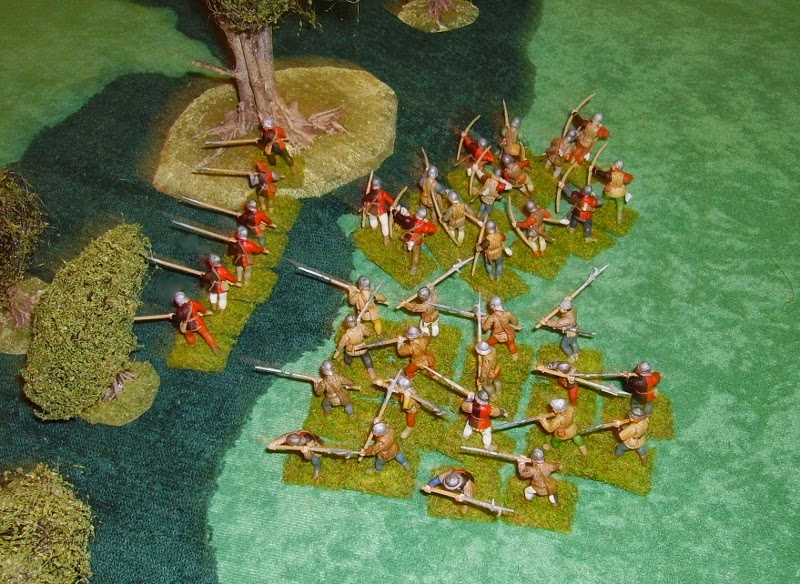 Lawrence sent his knights to demonstrate against Ian's men on the hill...several longbow arrows rattled off their armour! 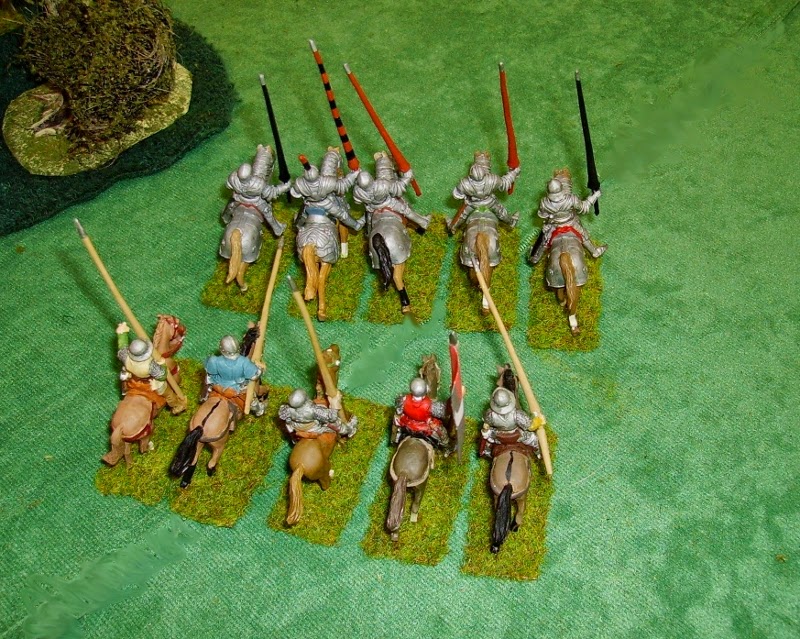 'la Garde Recule!' - the knights withdrew back behind the wood! 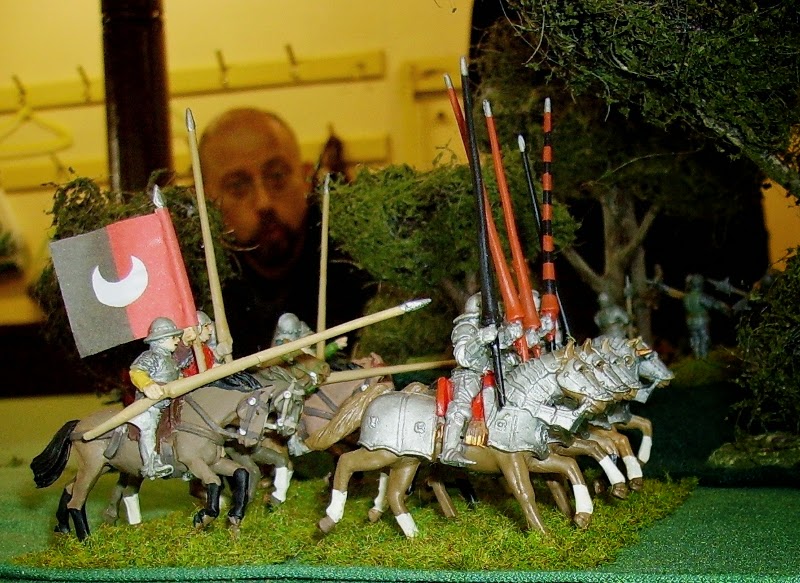 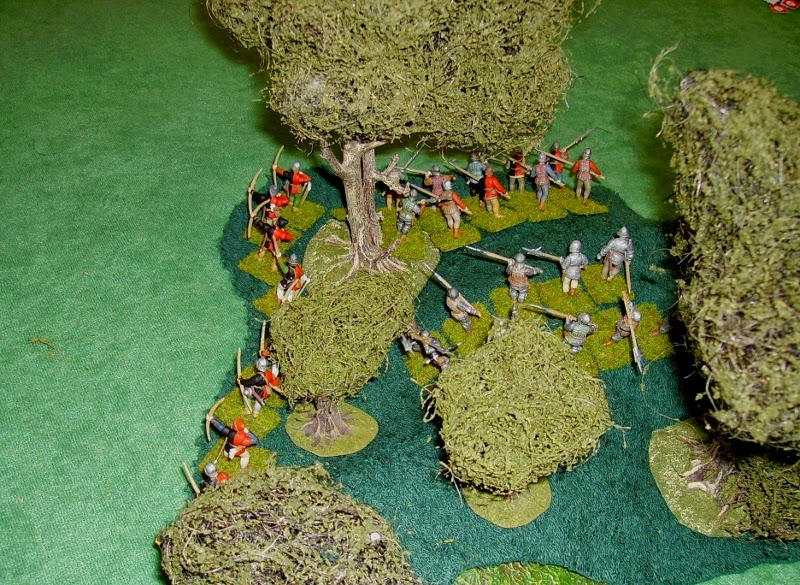 My bills and bows moved toward the edge of the wood. 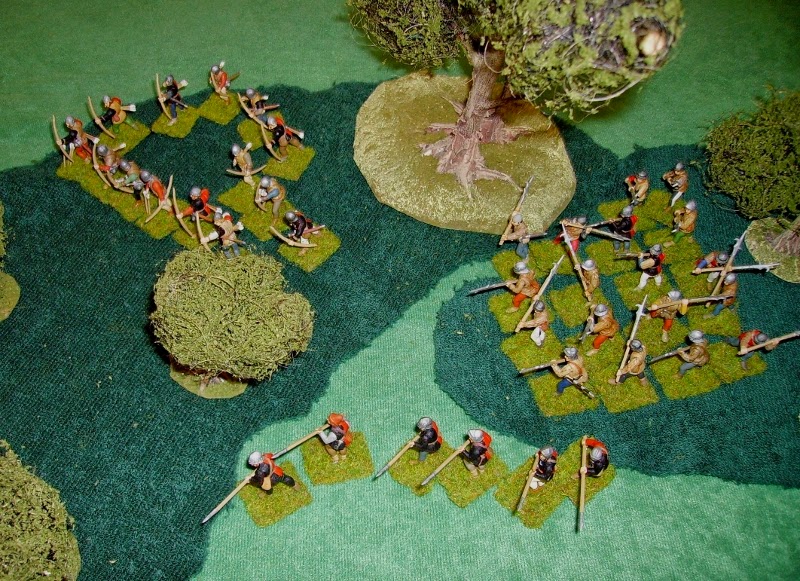 My armoured archers were waiting for them to get into position. 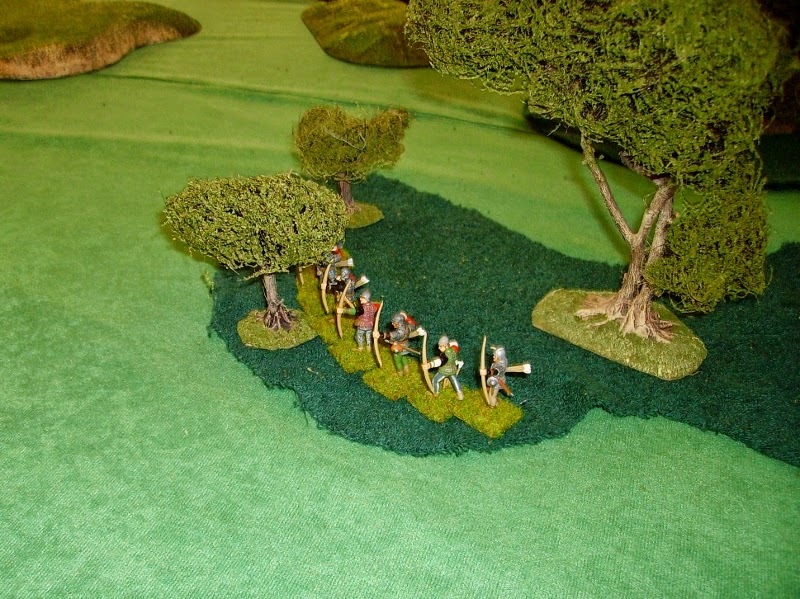 Lawrence was ready too. 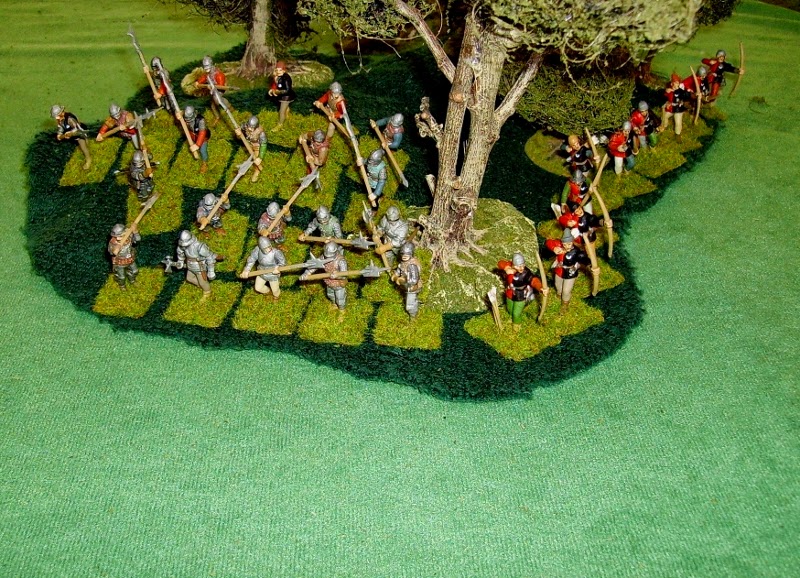 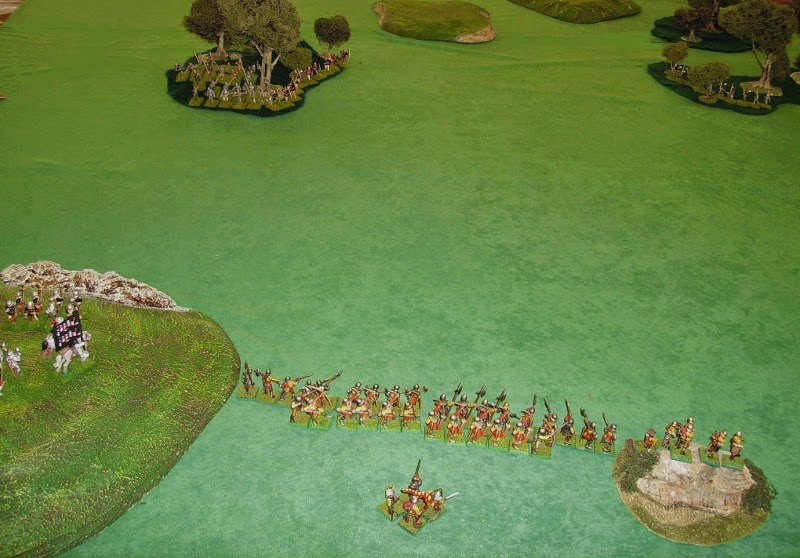 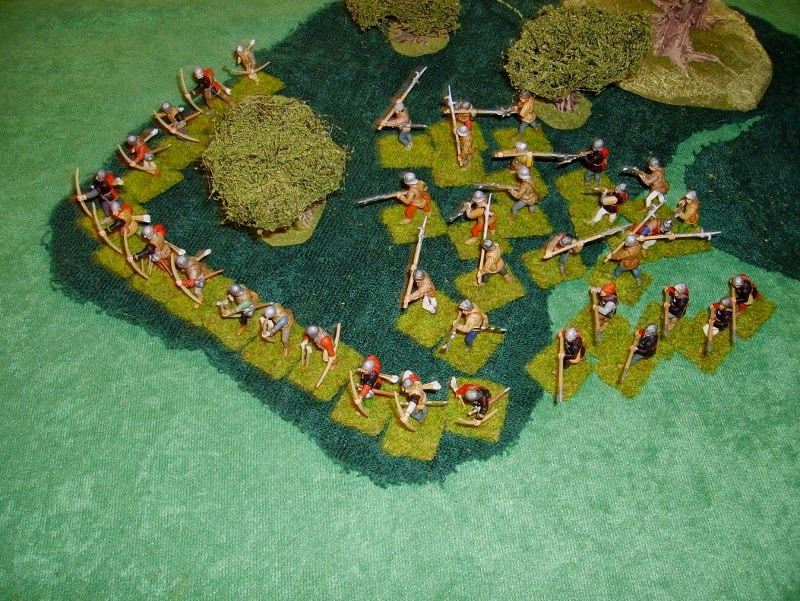 A horn sounded, and all our bowmen stepped forwards to shoot! 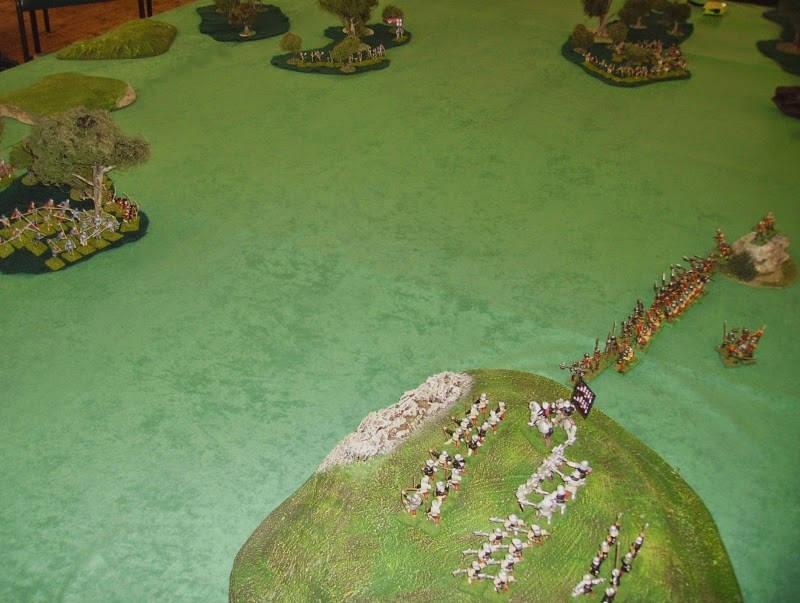 Despite their armour, some injuries were inevitable on the De Lacey line. 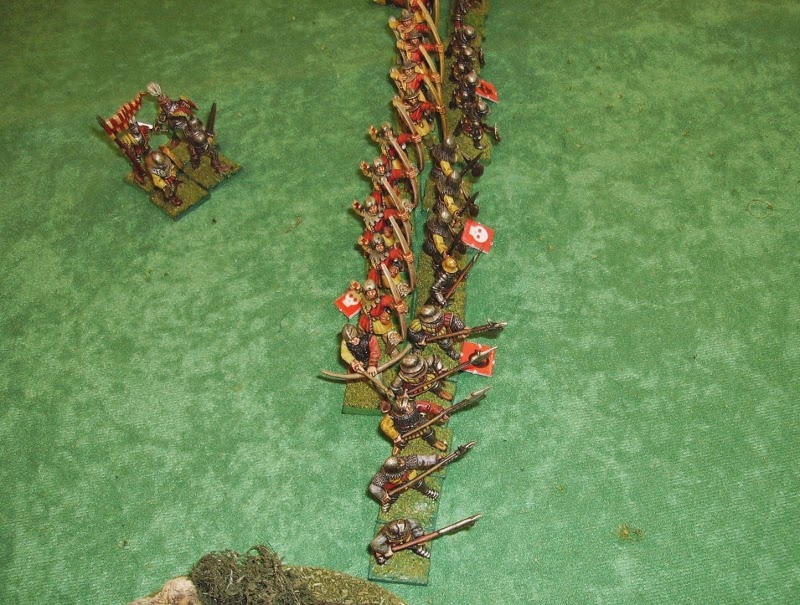 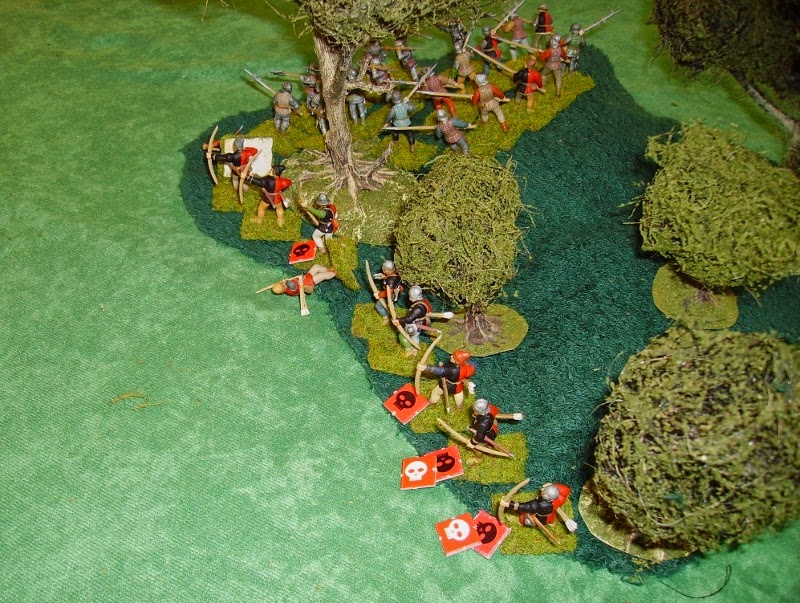 My bills and spears rushed towards the crossbowmen on Phil's wing. 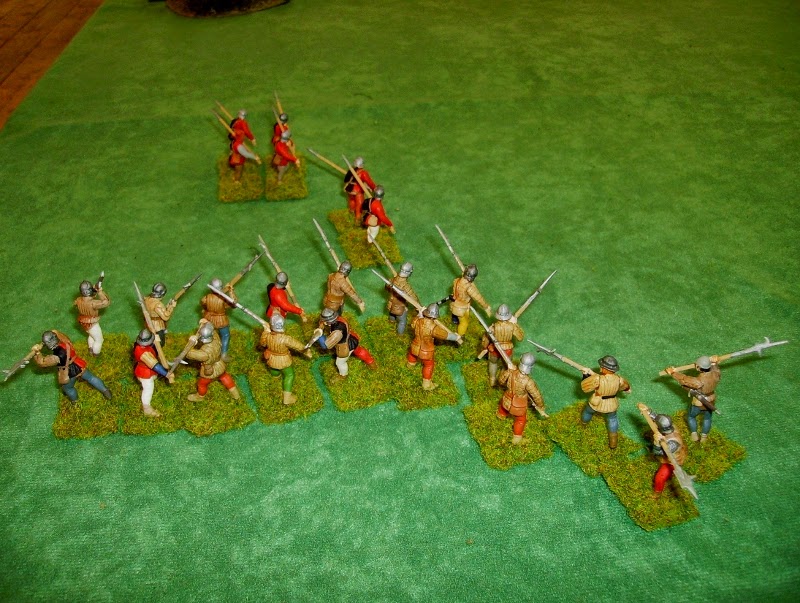 Phil reacted by drawing some of his men at arms to support them. 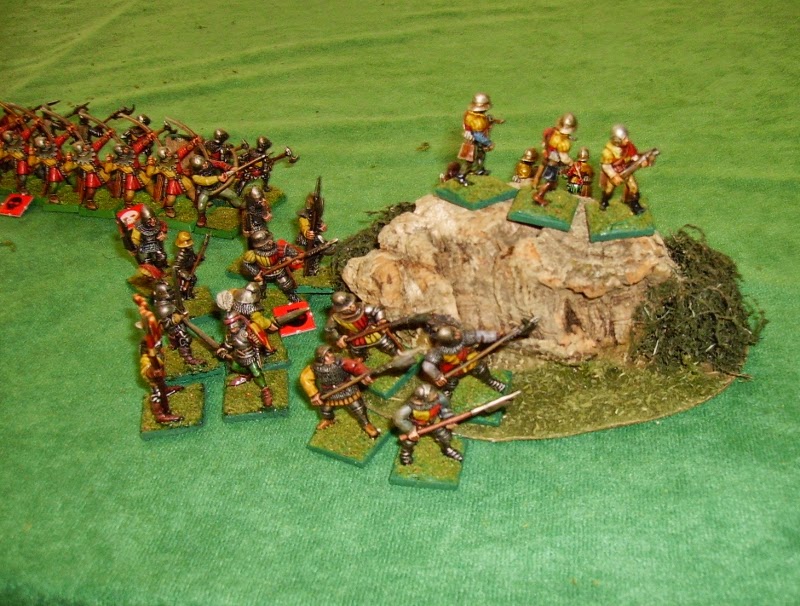 My light men at arms would have to depend on numbers against these heavy troops. 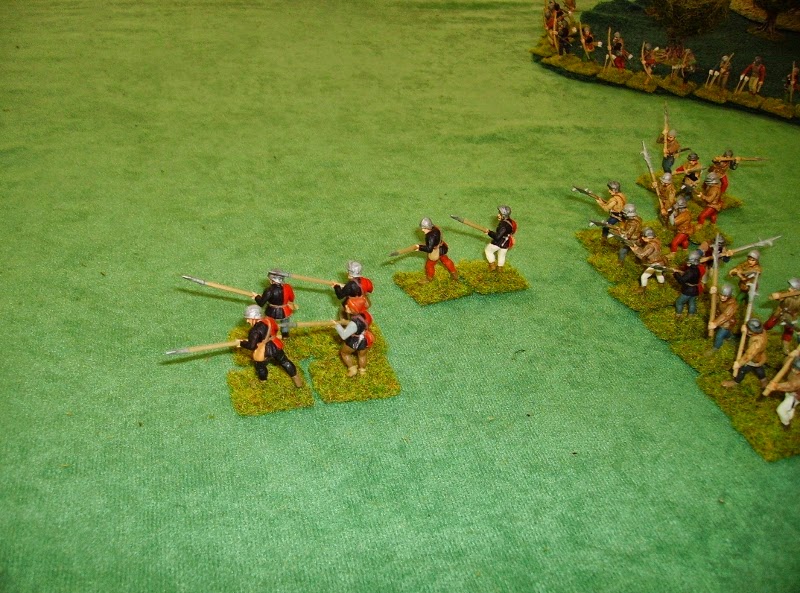 Lawrence's archers were still taking casualties, and withdrew briefly back into the wood. 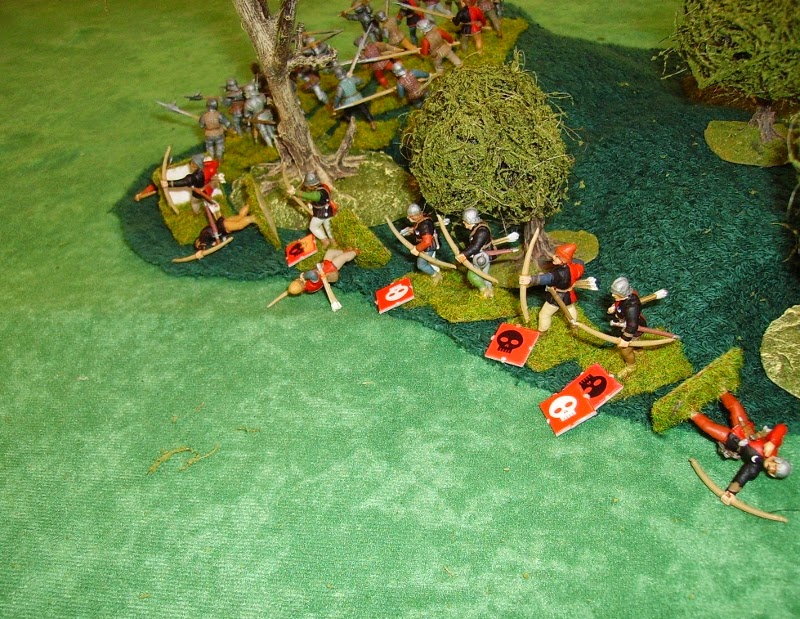 Phil's crossbowmen shot poorly, only lightly wounding one of my spearmen. 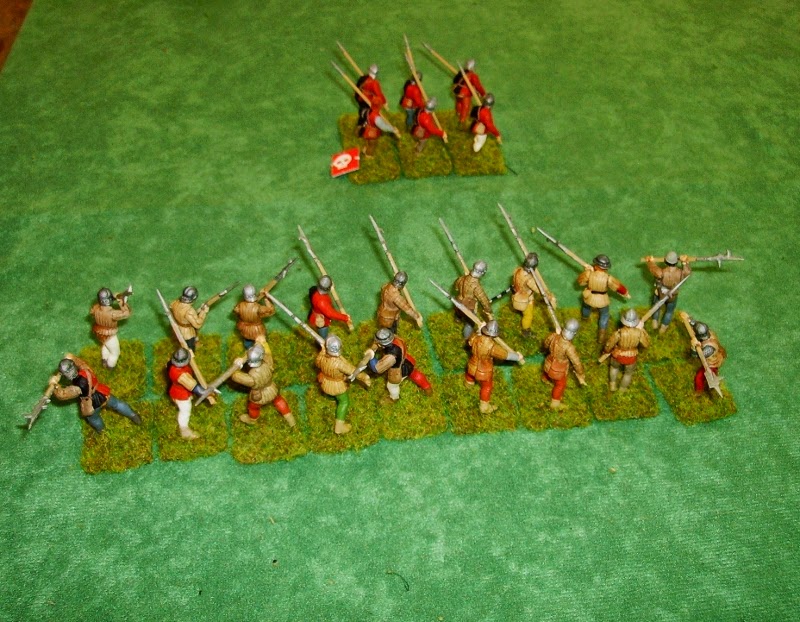 Lawrence, seeing Phil's force withdrawing under the withering Lancastrian shooting, began to advance his men at arms from the wood and his knights. It was beginning to look like another Percy victory was on the cards! 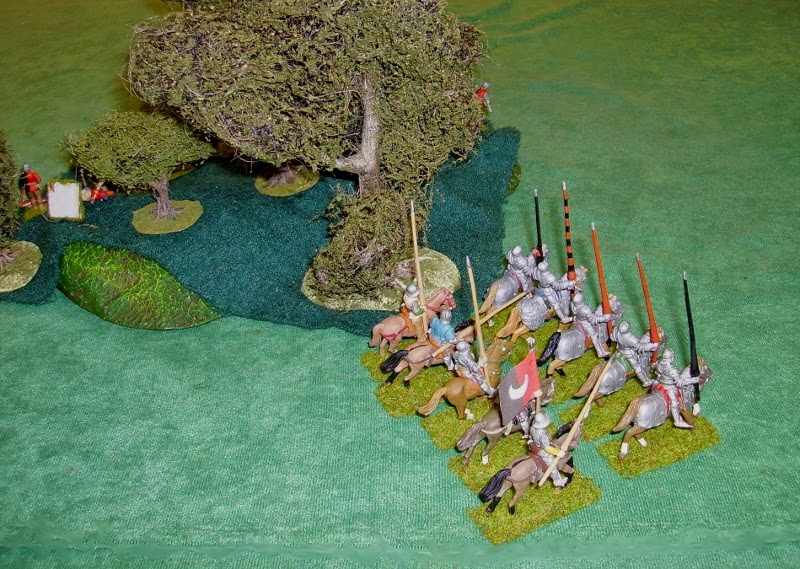 Then...Disaster! - a lucky Yorkist arrow from Ian's men on the hill hit our commander through a chink in his armour, and he fell from his horse stone dead! 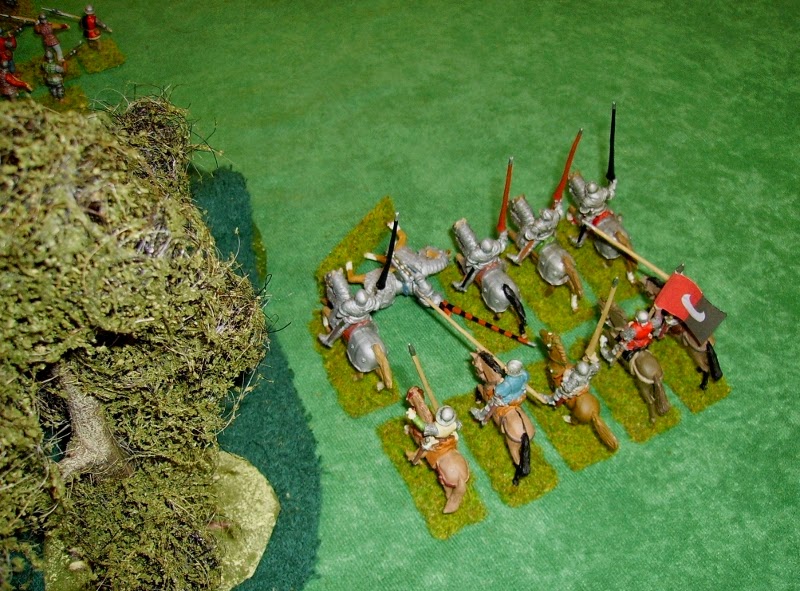 With our commander dead, the Percies withdrew from the battle. On the cusp of victory, a fluke shot snatched it from us!

It was an exciting game! - the rules seemed to work well, and the feel of the game was definitely better.

In the end, our losses in men were about the same, barring our Lord!