Bolt Action at the club!

I wasn't at the club yesterday, as I had to go out with my relatives to Morpeth!!!
Never mind, Phil has done a write up and taken some nice pics for me to post, so over to Phil...


On Saturday, we played a six-platoon game of Bolt Action at Tyneside Wargames Club: Gallant Frenchmen and stalwart Brits against the Dastardly Hun!


My 800-point (798 to be precise) French heroes in all their Gallic glory:
On the left, three 8-man sections of regulars, all including an LMG team and one rifleman with the excellent VB grenade launcher.
Back row, L-R: Panhard armoured car with 25mm cannon, Hotchkiss 25mm ATG, Brandt 81mm mortar, and the iron leviathan which is the MG-armed Renault FT17 tank.
Front row, L-R: 1st Lt (accompanied by a ‘green’ runner), Boys ATR, and the ever-reliable ‘French 75’, with Forward Observer. 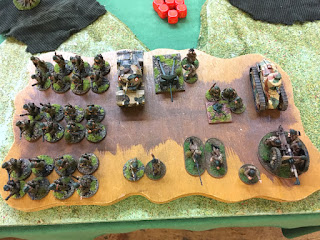 Ah, La Belle France!  A view, from south-to-north, of a crucial river crossing and the bombed-out factory works surrounding it.  The river is rough terrain for infantry, but is impassible you vehicles - as is the footbridge to the south.
One player would have to hold the crossing, and ‘hold until relieved’! 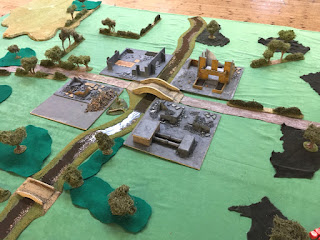 One of the two British platoons - this one played by Ian. 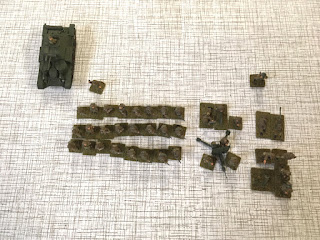 And a similar force commanded by Andy. 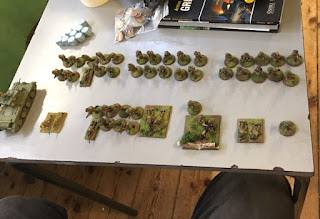 And the horrifying prospect of the Boche Blitzkreig!  On the left are two armoured platoons, played by Paul, and on the right (come to think of it, the extreme right) a smaller but very tough platoon of SS veterans, played by Rhys. 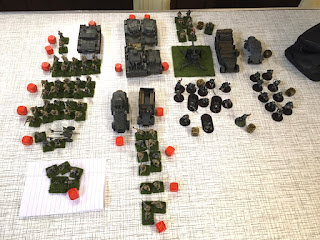 We diced randomly for our respective roles, and appropriately enough, my Frenchmen would start in possession of the built-up area and crossing.
My lines-of-fire were restricted by dense thickets, and I placed my direct-fire weapons where they could cover most ground. This resulted in a daunting concentration of forces in the north-east sector.
Victory points would be awarded for possession of each sector at the end of the game. 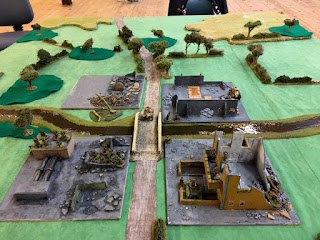 Les Rosbifs... coming on in very good order, but sacre bleu, they’re a long way off! 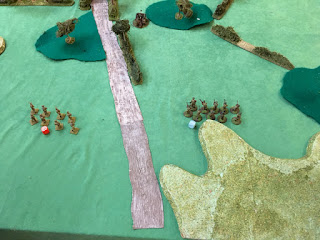 The sound of engines from the east - Rhys’ SS men recon forward to the north of the table edge... 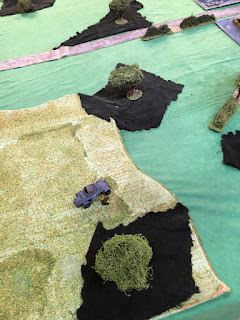 ...and Paul’s mechanized infantry to the South-East. 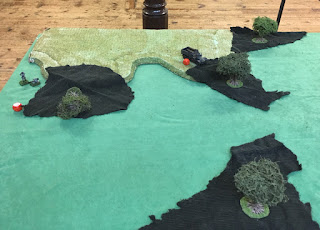 Les Allemands move like the film’s been speeded up!


Mechanised infantry from the south... 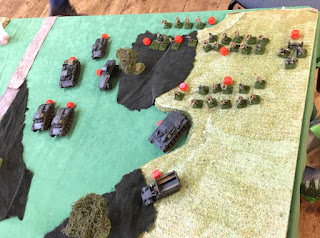 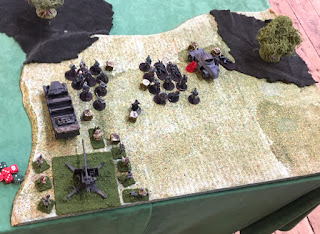 
My ATG damages the SS armoured car, while the German sniper next to it rolls a ‘5’ to pick off my Anti-tank rifleman! 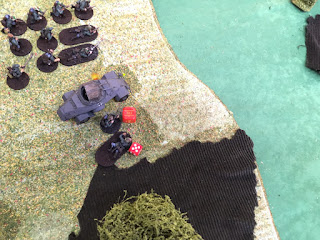 No hurry lads, take your time why don’t you. 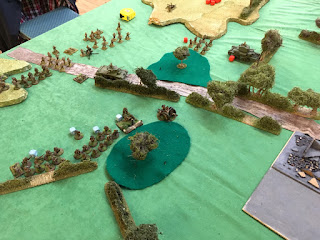 Not as crazy as it looks, honest!


My armoured car abandoned its position on the bridge in order to make room for the oncoming Brit tanks to make a more formidable obstacle.  It was a calculated risk - in my head, anyway. The AC would be exposed to fire from both oncoming forces for one round only - after which I could lose them among the woods!  En-route, I hosed down the truck towing Rhys’ fearsome and points-heavy 88mm, destroying it outright and immobilising the mighty gun. 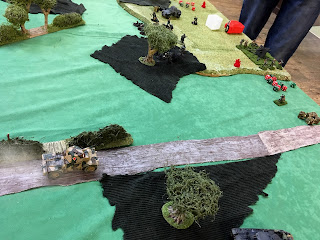 The SS revenge was instant and devastating! 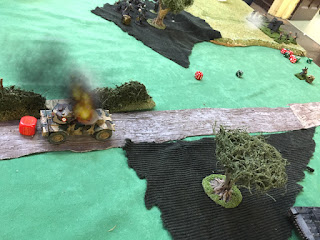 The mechanised attack develops on the southern half of the table, with little there to oppose it.  What saved the built-up sector - for now - was the German armour’s complete fixation on destroying my ATG. Thoroughly suppressed but unharmed, the 50-point gun was soaking up the rolls of hundreds of points-worth of Jerry units.

It couldn’t last... a close-range machine-gun facial finally caused my one surviving anti-tank gunner to flee. 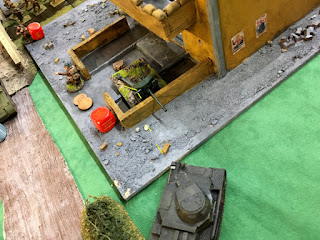 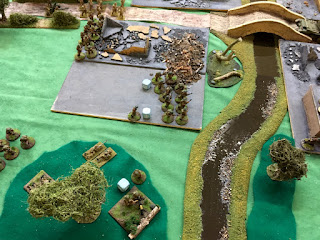 Meanwhile to the North, my rifle-grenadiers were playing merry hell with the Master Race, and the first speculative long-range fire from the advancing British picked off the 88’s artillery observer. Now blind and motionless, the beast was thoroughly dehorned. 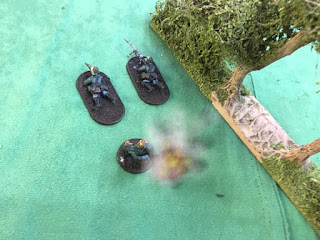 In a cruel trick of geometry, the only figure in my FT17’s arc of fire was the villainous SS commander. 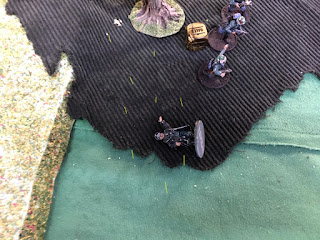 In the south-west sector, the French defenders were selling their lives dearly. 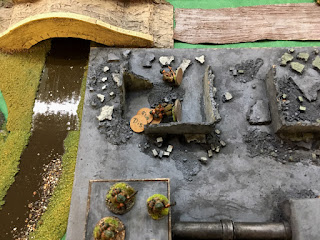 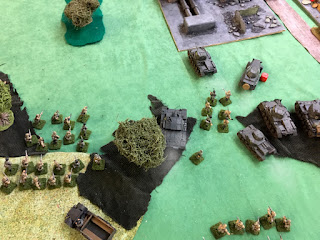 With the SS comprehensively defeated in the north, I redeployed the armoured might of the FT17 southwards along the riverbank.


The British tank in the background is trading hilariously ineffectual shots with an equally hapless German Panzer - a process which continued for round after round! 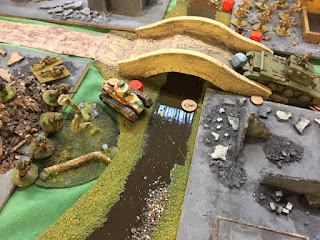 The grand finale!
Andy’s Tommies were thoroughly peppering the Germans from across the river - and, with the SS defeated almost to the last man, the surviving French forces in the north-east sector were able to turn their fire on the German flank.
While their panzers were in good shape, sheer volume of incoming dice was degrading the unfortunate Landsers. 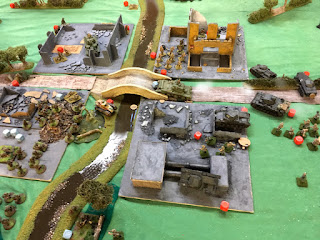 Ian’s Brits had become somewhat ‘target-fixated’ on the few surviving SS.
Polite but oh-so-subtly barbed despatches from the French commander resulted in a renewed British counterattack toward the German-occupied sector.
With all allied firepower on the table now concentrated on his force, Paul called it a day.
Overall, it had been a very close call for the Allies.
The game was characterised by commanders on both sides becoming overly focused on minor targets, and by the comparative ineffectiveness of our Big Guns: the neutered 88, my howitzer pounding away every round and hitting nothing, and the British and German tanks shooting tennis balls at one another.


Thoroughly entertaining and a chance to get one of my favourite armies on the table.


Incidentally, Rhys has put a German view of the battle on his blog! at this LINK
Posted by Herkybird at 20:22