The Red army is pushing a German force back in late 1944.
The German force has decided to try to stop the Russians in some difficult terrain.
The Soviet force consists of a platoon of regular Soviet infantry and a platoon of 3 T-34s, one of which is armed with an 85mm gun.
The Wehrmacht force is unknown to the Russians at the start of the game, and is run by the rules solo system.


The Russians decided to put most of their force down the road  they were following while a squad, supported by the T-34/85 were to move down the left wing. 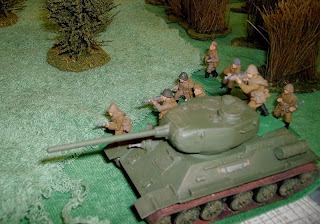 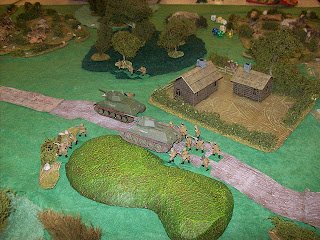 The terrain to the Russian right being too dense to allow the rapid advance needed to avoid the attention of the NKVD!
The main Russian advance proceeded past a Dacha and immediately came under fire from a German squad in cover and a Pak 40 anti-tank gun on a rise further back. 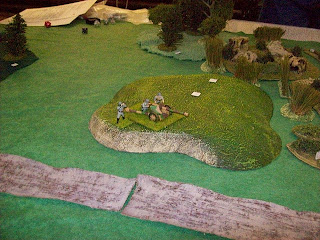 The front T-34 took a hit which blew the right track off, and the infantry riding ‘Desant’ on it jumped off leaving their dead NCO behind. 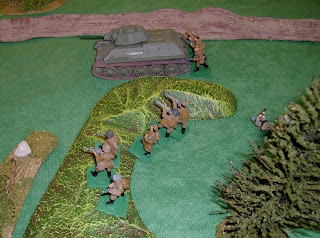 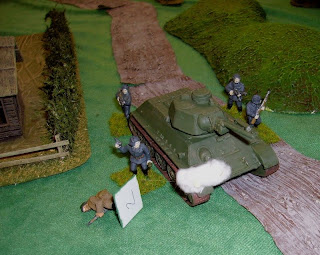 The second Soviet T-34 dismounted its infantry and the combined force destroyed the German infantry quickly – largely due to a lucky 76.2mm HE hit.
The Pak 40 managed to get another penetrating hit on the immobilised tank which stunned the crew, and then engaged the second tank which evaded the fire and managed to kill the gun crew with another lucky hit. 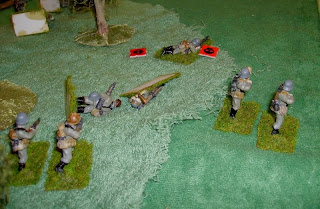 On the left, the T-34/85 followed its infantry through the wooded terrain there and ran into a full squad of enemy infantry supported by a Panzerjager team with Panzerfausts.
Once again the Russians prevailed thanks to their tank support, and the belated support of the command sections Maxim firing from a nearby rise. 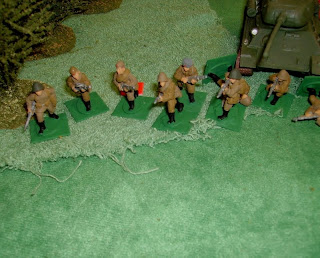 The Panzerjagers tried to get close enough to engage the tank but had to fire at too long a range and missed. The Russian infantry took some losses though not enough to stop their advance. 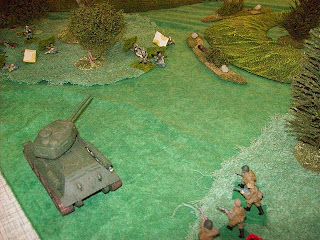 The Russians then converged on the main hill – the objective of the game, where they came under fire from another enemy squad on a nearby rise. This group was supported by 2 Panzerschreck teams. 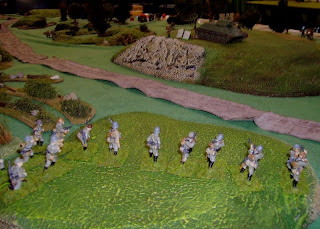 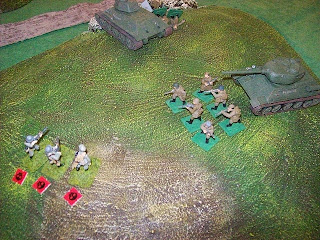 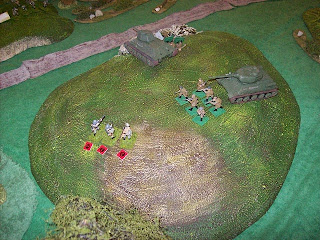 The Panzerschrecks blew both tracks off the T-34/85 and killed the gunner, and the supporting infantry was decimated, but the rest of the Russians managed to concentrate fire to scatter the Germans. 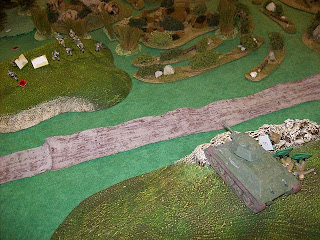 On the Russian right, the infantry attached to the first tank headed into the marshy area against orders and ran into a pair of German MG42s which killed several of them, the survivors evading and moving to help their comrades in their battle with the Panzerschrecks. 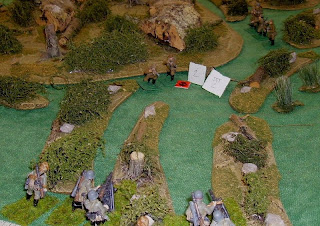 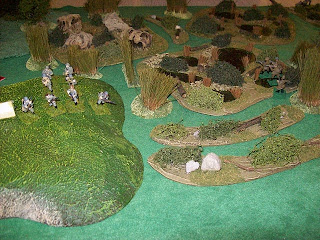 At this point the Germans decided to fall back to conserve their forces. A Hetzer   positioned at their rear had not been able to engage, but would be able to fight another day. 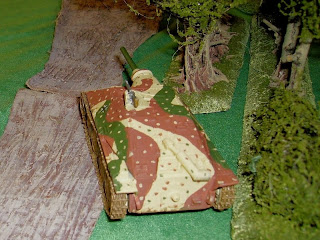