Today, we had another 7 Years war game at the club.

I had my Russians again, and Lawrence his Austrians, but this time with a different mix of troops.

I rolled up as defender again so I had a limited deployment area, but the choice of table side to defend...

I deployed a large cavalry wing on my left ready to deploy into the flank sector of the table. 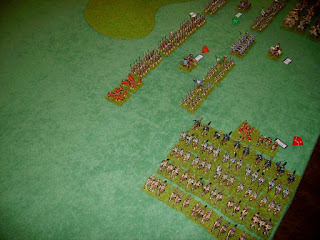 My centre and right looked weak, only light horse supporting my foot. 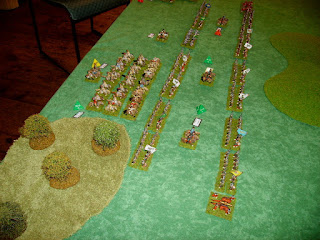 The Austrians had a cavalry brigade facing my left, and a strong infantry force supporting them. 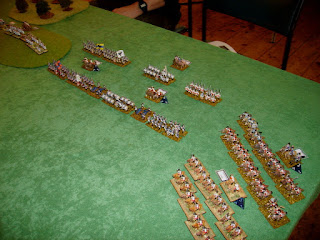 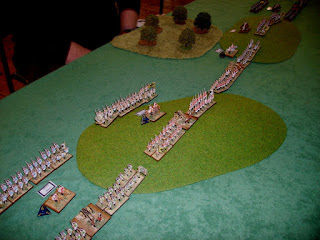 As we started, I declared my hidden cavalry brigade in the woods. Unfortunately, my command rolls meant most of my right stayed still! 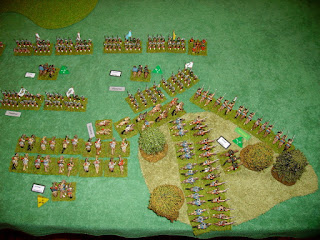 On my left I only got 2 regiments of horse back from facing the Austrian infantry wing, I had to strip my second line infantry to expand to face them too. 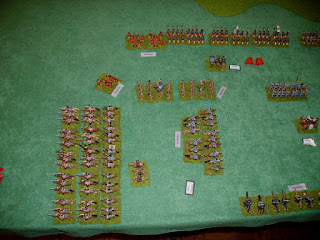 My artillery managed a hit on Phil'd left hand infantry as they advanced on my line. 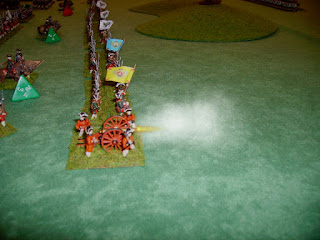 I only disorganised a gun battery at this range though. 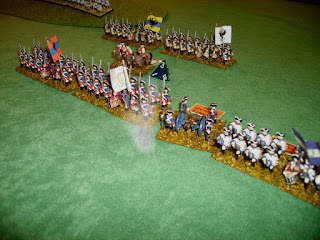 I was having trouble expanding my right wing infantry, I was only lucky the Austrian horse was slow in advancing on mine - which was still happy to stay in the woods! 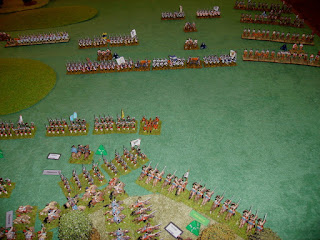 The Austrian right advanced on my redeploying left wing. 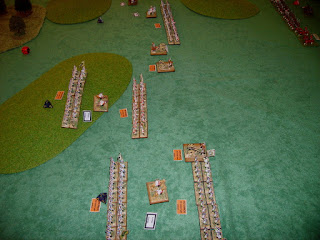 My line looked like Piccadilly station as my horse rushed to redeploy! 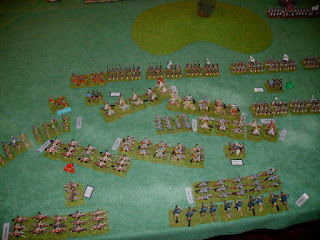 Finally, my first cuirassier regiment  began to advance to avoid the Austrian infantry and engage their cavalry. 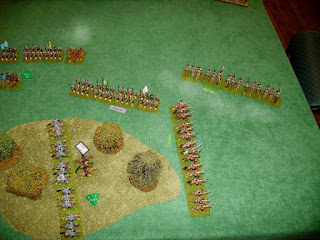 Phil's infantry wing began to engage my line, but the Russian infantry got in a crashing volley in return. 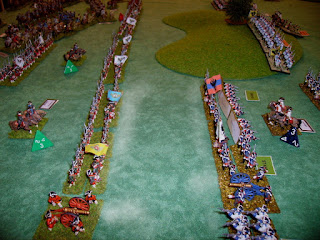 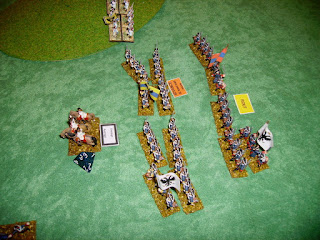 My other brigade was doing less well! 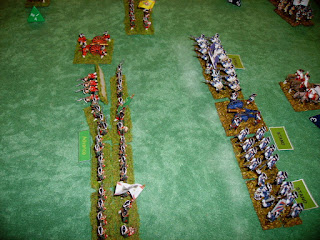 The Austrian second line infantry quickly got themselves in order and advanced on my Russians, a solid volley ripped into my infantry! 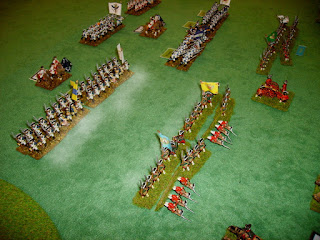 My return fire did some damage on the Austrians. 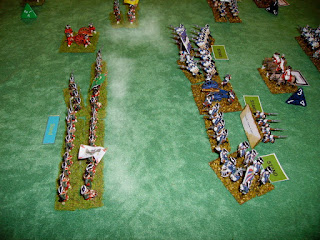 My left was sorted, but heavily outnumbered. My wing depended on its artillery support which failed to upset the advancing Austrian foot. 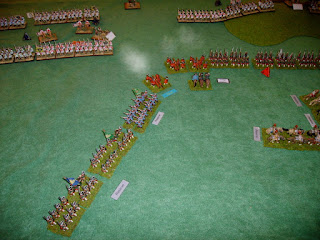 My left wing cavalry was finally getting to the right to support my horse there. 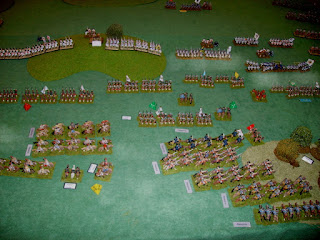 Unfortunately both the Russians and Austrian horse were loath to charge, which suited the Austrians rather than me! 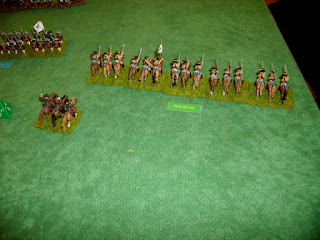 My artillery did have a moment of glory, one of my guns... 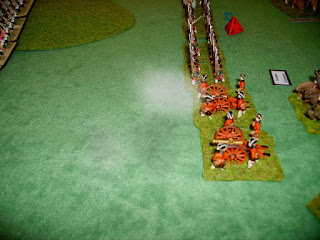 ...smashed an Austrian heavy gun, which had been harassing my line. 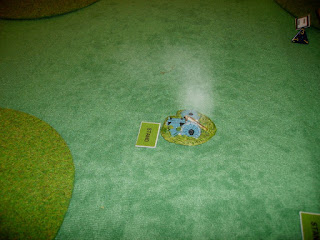 On my right, the Austrians closed with my regiments and cut a swath through them with musketry! 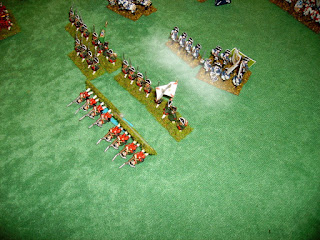 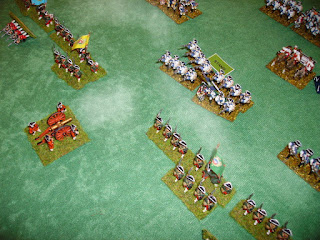 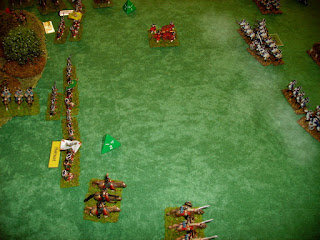 ...as my right wing infantry fell back in retreat! 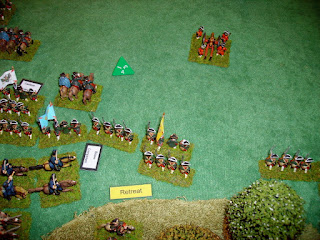 My left was looking very vulnerable as the massed Austrian infantry advanced on them... 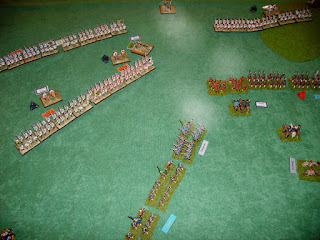 ...even my grenadier centre was getting damaged from the enemy artillery on the hill. 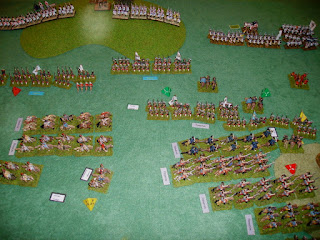 My right wing horse were STILL failing to engage! 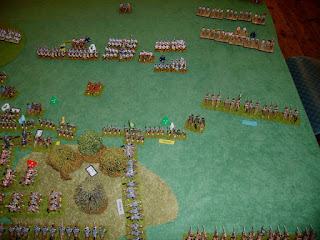 It became obvious I was going to get swamped, so I declared a general retreat.

A bad day for the Russians! - but a good one for the Austrian infantry!
Posted by Herkybird at 18:17