Today, we had a Seven Years War game at the club. We were due to be a foursome, but poor Phil isn't well, so it was just Lawrence, David, and myself.

We randomised the terrain and player mix, so David with his English would join the Franco-Reichsarmee against my Prussians.

As has become usual, Frederick got choice of table side - and deployed first, while the Confederates had first move. The table was fairly open, except one side where there was a wood bordered by steep hills!


David was on the confederate left, with some Reichs cavalry supporting 2 brigades of English and Scots, these would have to traverse the difficult terrain. 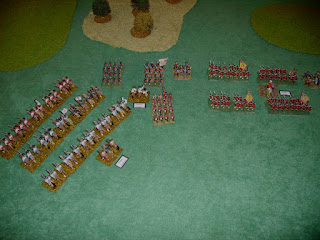 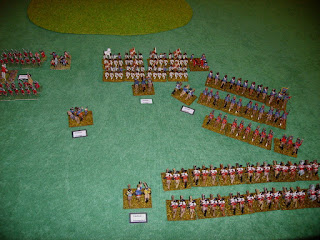 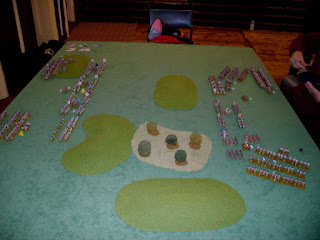 The confederates had some poor brigadiers (nearly as many as me!) - but they managed to get their troops moving, for the most part. 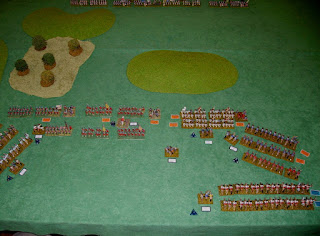 Worryingly for me, I had a competent cavalry brigadier facing my Incompetent! It showed as he got his Reichs-Cavalerie moving round the flank, skirting the steep hills. 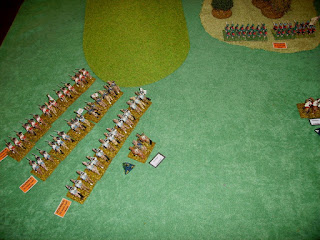 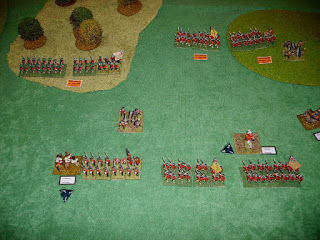 Facing my 3 regiments of Prussian horse, the Franco-Austrian cavalry wing was twice my strength...I would have to be inventive! 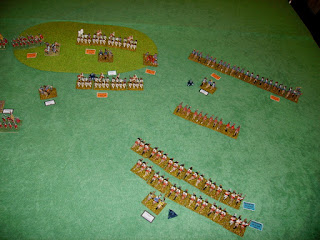 My Incompetent right wing Cavalry commander failed to command anything! Seeing this, Frederick behind the Infantry prompted one Kuirassier regiment to move! 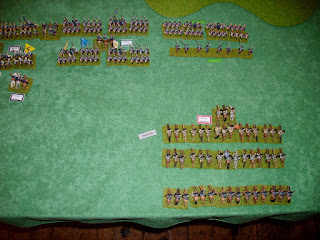 On the left, my Horse again refused to move, but I was able to advance a reserve gun battery from next to the cavalry to move to face the enemy cavalry. Would I get caught before I could deploy? 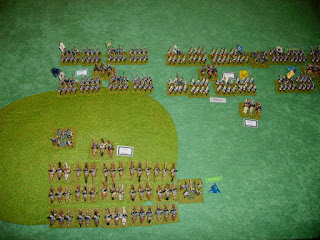 I did have a spare infantry brigade in front of my stationary horsemen, which was not facing enemy infantry, I decided to use them to slow the enemy cavalry wing. 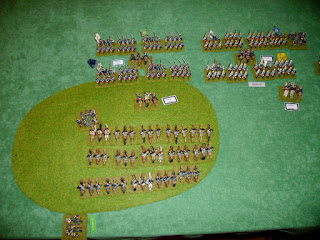 On my right, the unit prompted by Frederick rode out to face the 3 Reichs Cavalerie unsupported! 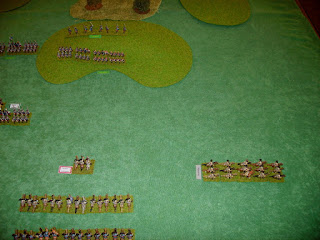 The cavalry on the French right was deployed, and began advancing quickly. 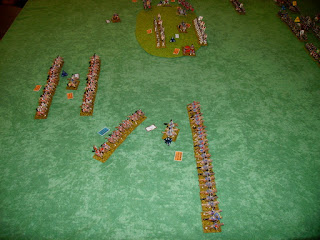 The confederate infantry was now marching together - I had advanced a regiment of infantry to face off the English. 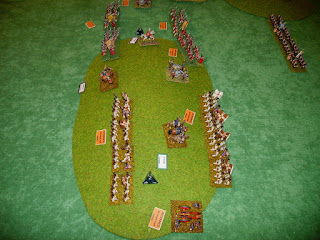 I was helped on the other wing where David's cavalry were slowed, they had to have squadrons on the steep hill which slowed and disorganised them. 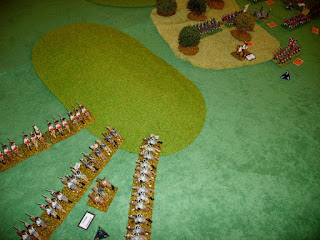 My Prussian regiment met the English, their first volley was quite effective, but the redcoats held. 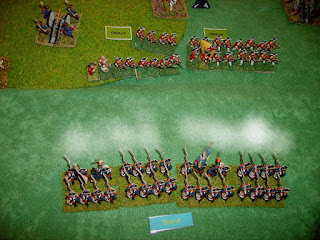 My left wing infantry managed to flank and defeat the front rank battalions of French, who fell back through their second line. 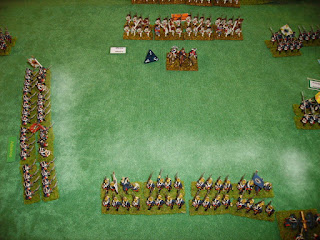 The English infantry had rallied, and disrupted my Prussian regiment. 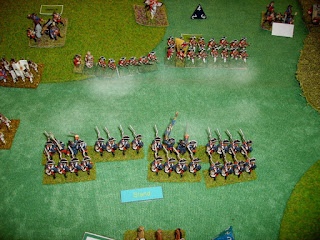 My front regiment retreated in disorder through the second line! 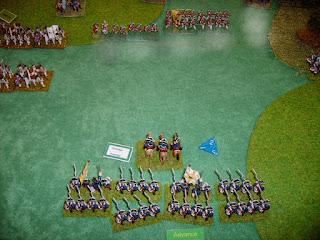 Facing the Scots in the wood, I had advanced Frei-Infanterie von Mayr into the wood to face the Scots, but they were dispersed in rout by a full volley! I had intended to keep the 2 supporting grenadier battalions on the hill to prevent the Scots causing any more mischief, but my brigadier was too busy fighting he English, so into the wood they went! 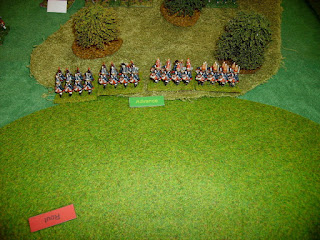 I had finally got my right wing cavalry moving, and just in time! Dave was getting his cavalry past the hill! 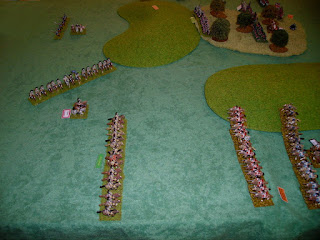 My left wing horse, too, had begun to move, but were still trying to deploy. Only my artillery was left to face the French cavalry. (At the top of the picture, you can see my Prussian infantry driving off the Austrian Kuirassiers!) 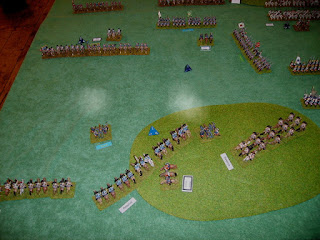 The French horse was halted briefly by the brisk bombardment 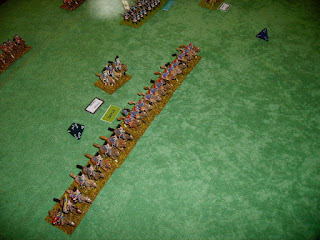 Regiment Bretlach  tried to charge my advancing infantry, which had already driven off regiment Trauttmansdorff - but thought better of it! 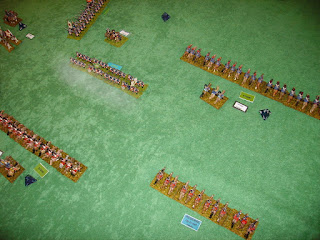 Facing the English, my second line infantry, having reordered their ranks, advanced and fired a crashing volley into the already weakened battalions. 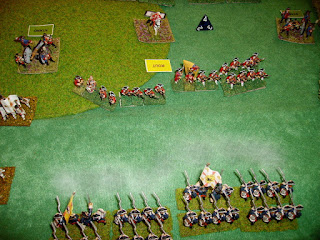 My victorious infantry on my left now engaged the French second line. 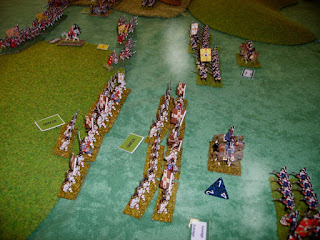 The English infantry routed, and to the surprise of all, all the French infantry and the centre artillery began to retreat! 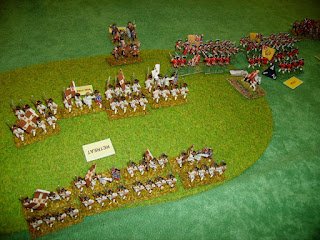 With his centre gone, and my left wing horse now advancing on the unsupported French cavalry, Lawrence signaled the confederates to leave the field.
Oddly, on my right, even the Prussian kuirassiers had failed to charge the Reichs Cavalerie, after they had failed to charge! That wing just stood and glowered at each other while the battle was decided elsewhere!

All the players felt it had been a close and fun game, which means we all won!