Today, Lawrence and I were the only ones of our group around, and did yet another 7 Years war game!

I used a slightly more cavalry heavy Prussian force against the same Franco-Reichs army that beat us last week.


I deployed in a defensive position astride 2 low hills, my left looked weak with only Frei battalion Mayr alongside 2 medium gun batteries. 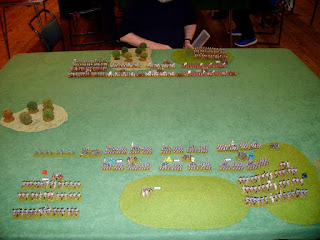 The French had the Swiss on the left and the Austrian cavalry on the right. 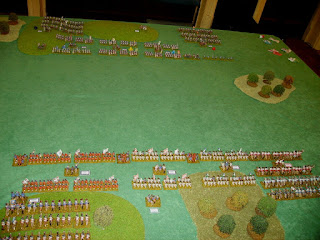 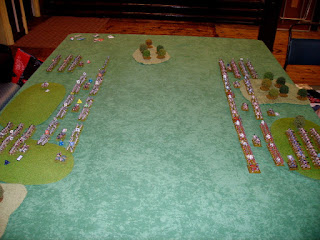 The left wing French cavalry began the battle by extending to the left. 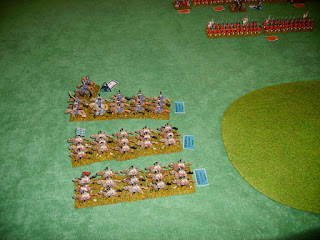 The French infantry had good command and control and began a co-ordinated advance against the shorter Prussian line. 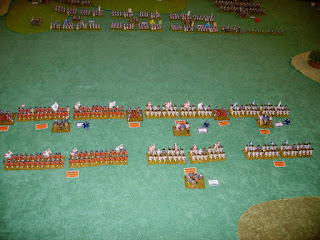 The Austrian cavalry were the only ones slow off the mark! 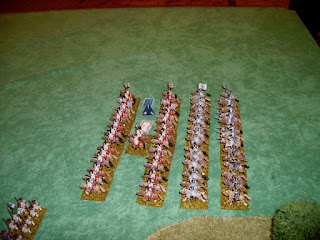 My right wing cavalry only managed to get a single Kuirassier regiment (KR8) out to face the French left cavalry. 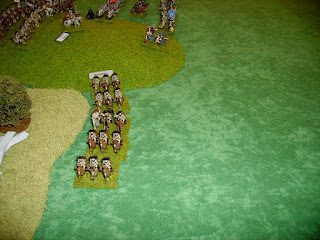 My infantry were happy to bombard the French as they advanced. 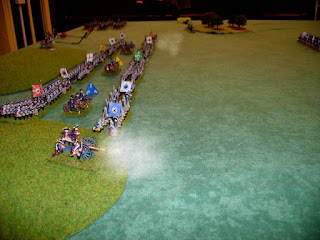 The French infantry right moved to take my artillery, the Frei Korps having gone to hide in a wood! 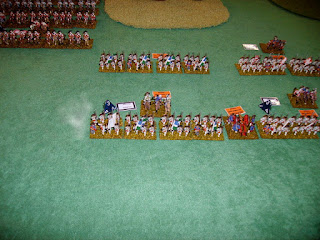 Surprise! I had hidden 2 Grenadier battalions behind the hill, and these now moved forward to reinforce the weak left! 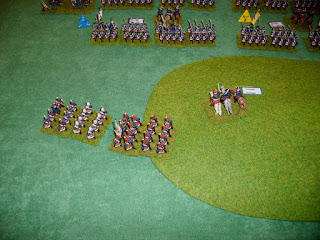 My left wing batteries were amazingly lucky, and broke the right-most French battalion with 2 devastating volleys of canister! 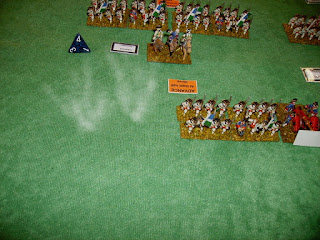 The battalion next to them broke and ran too! 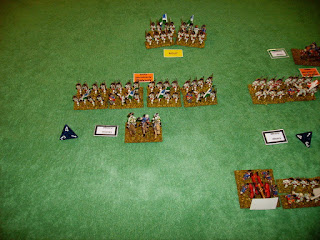 The Prussian gunners now fired on the second line... 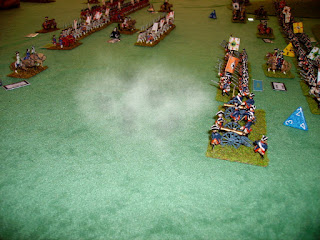 ...and shredded another battalion! 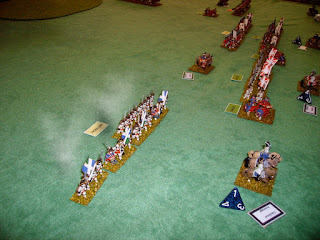 On the Prussian right, KR8 crashed into the Cuirassiers du Roi and broke them after a desperate battle. 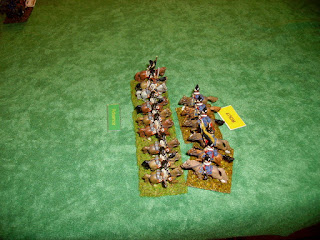 On the far left, my cavalry had come round the wood. The Frei Korps harassing Austrian regiment Bretlach from the safety of the wood. 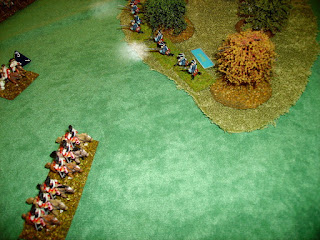 Having seen off the French Cuirassiers, KR8 rallied and began returning to the safety of the Prussian lines. 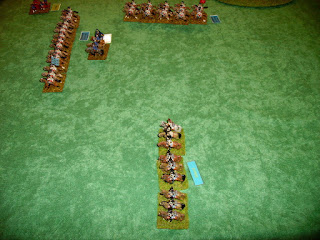 While the artillery boomed, the rest of my right wing horse deployed to face the French cavalry. 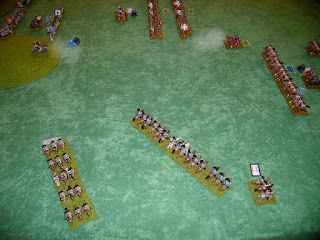 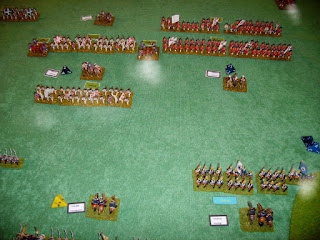 My left was holding easily. 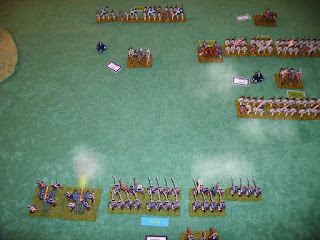 On the left, my Kuirassiers faced off with Regiment Bretlach, but failed to charge! 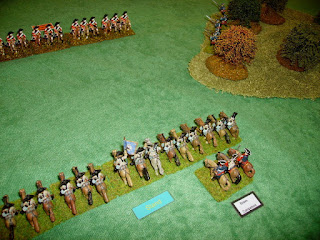 Bretlach charged instead, but broke through the impassive Prussians! - we had the odd situation of an Austrian cavalry unit routing past the Prussian reserve lines! 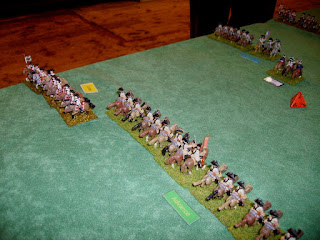 My Kuirassiers now charged Austrian regiment Trautmannsdorf who had been supporting Bretlach, The surprised Austrians stood their ground, as the few remaining Prussians rallied behind them! 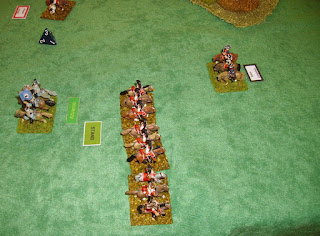 The centre was stabilising, as the second Prussian line took the place of the battered front line. 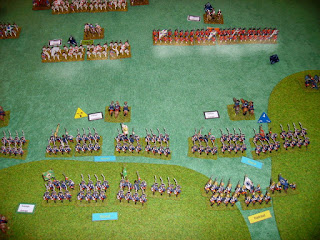 Much to my surprise, my left wing infantry front line also retreated after taking heavy fire from French regiment Picardie. 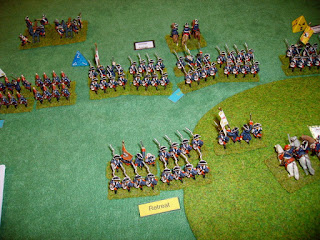 On the French left, the French Cheveaux-Legers attacked my Dragoons... 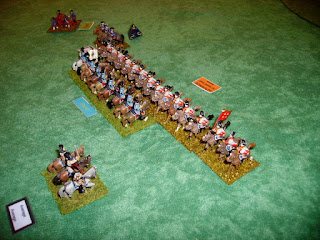 My Dragoons broke, but the French now found themselves facing Fresh Kuirassiers, and KR8 on their flank! 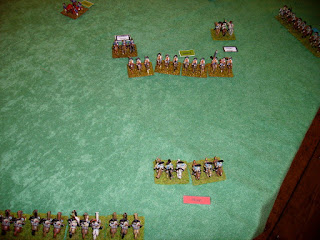 Both centres were showing signs of wear! 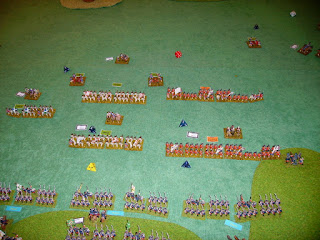 My left wing Kuirassiers (with supporting Dragoons just out of picture) began advancing and looked set to beat their opposite numbers. 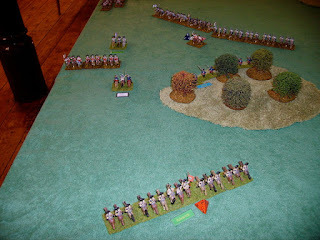 With both flanks looking 'ropey', and the Prussian grenadiers preparing to attack the French infantry right, The French now decided to break off the action. I think the Prussians would be glad to let them go!

That was a hard fight, both sides had the advantage at one time or another, and both players had a fun time, so we are all winners!
Posted by Herkybird at 19:20