Today, we had another 7 Years war game at the club, it was made interesting in that we had more terrain to fight around than normal, and Lawrence's French got to be the attacker! He even diced to get a larger deployment area!
Phil was his sub-commander, leaving me to command my Prussians alone.
We drew chits for our generals, I got 2 incompetents and 2 average ones, Lawrence got averages and Phil got an incompetent.

The little village of  Sturmgeschütz - a steep hill to the left, and a circle of low hills to the right. 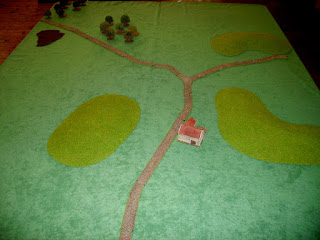 On the far side, 2 woods and a boggy area. 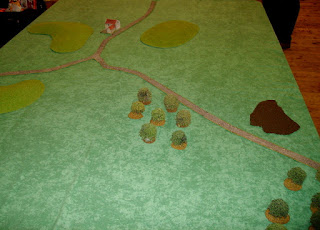 I deployed on and around the low hills... 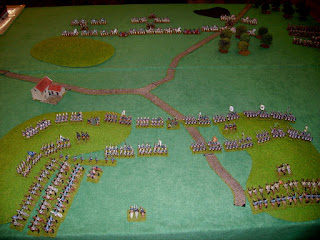 A Franco-Austrian cavalry brigade was positioned to outflank my left. 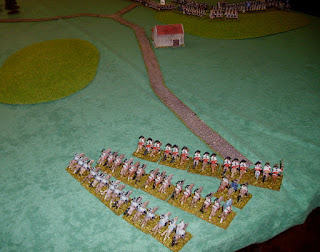 The French infantry deployed in an extended line across my front. 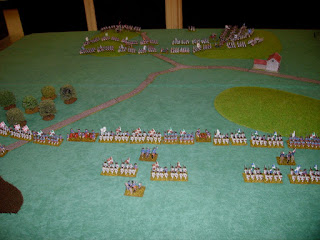 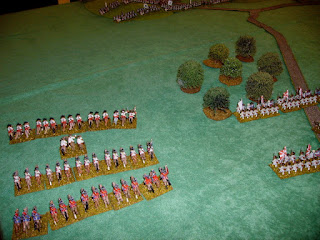 The French attacked, bringing their artillery forward to bombard my centre. 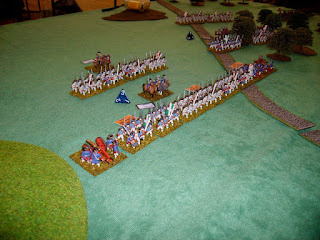 Fortunately, I had a battery of 12pdrs on the hill near the village... 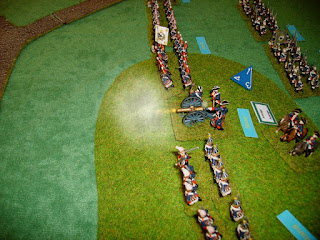 A lucky shot demolished the French gun opposite, further weakening their line. 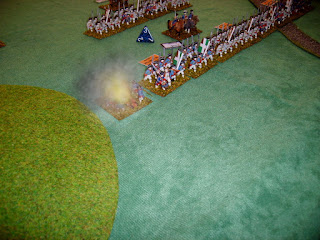 Phil's right wing infantry were handicapped by the steep hill they had to cross. 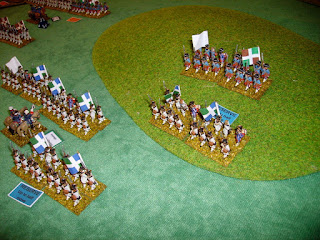 Lawrence, on the French left, moved through the woods, but they were falling behind the main infantry line. 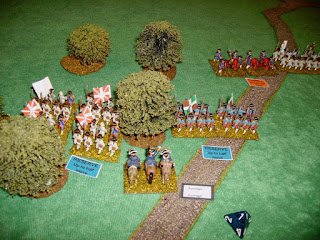 Lawrence was focused on getting his Austrian Kuirassiers round my flank. 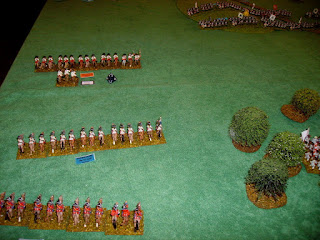 I had moved Frederick (my CinC) towards them, as I had both incompetent generals there! 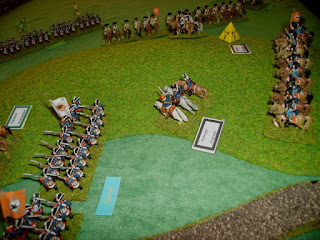 Seydlitz, on my left, moved his cavalry to engage the quiescent Austrians. 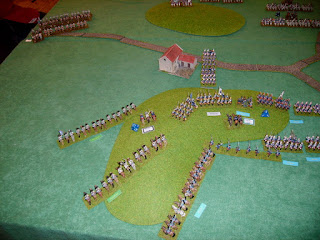 Seeing Phil's infantry struggling up the hill, I sent 2 battalions of Grenadiers to further hamper them. 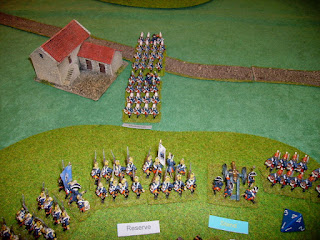 Frederick got the right wing moving, though the dragoons were slow in supporting the Kuirassiers. 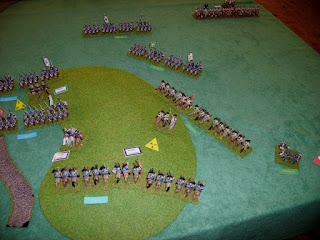 I sent a brigade of infantry to contest the woods and outflank the advancing enemy cavalry. 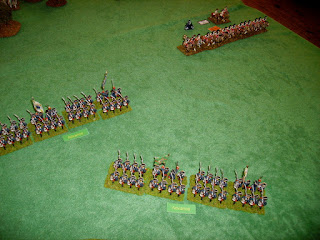 My whole line was now advancing, apart from the Frei Korps! 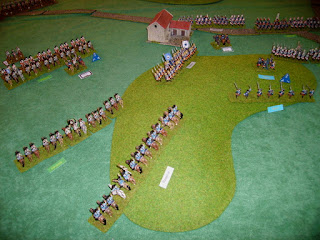 On the left, my Kuirassiers clashed with the Austrians - although I had the advantage, we drew! - My kuirassiers passed through ending behind the Austrians! The Austrians then charged and smashed my second line before coming to grief against my dragoons! 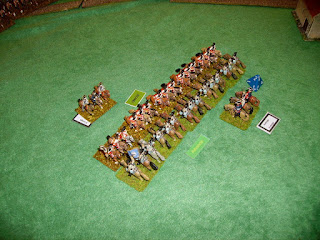 My infantry in the centre were advancing on the French. 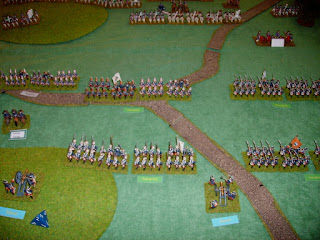 On the right, my infantry were holding the French in the wood, and engaging the Austrian dragoons... 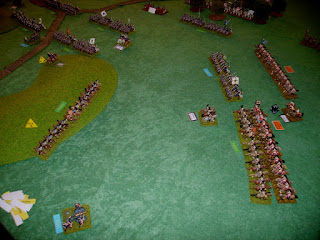 My Kuirassiers crashed into regiment Trauttmansdorff. 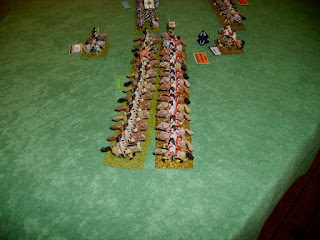 The fight was hard, but the Prussians prevailed! 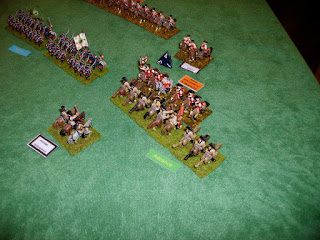 They chased the Austrians off table, while my infantry shot the dragoons down. 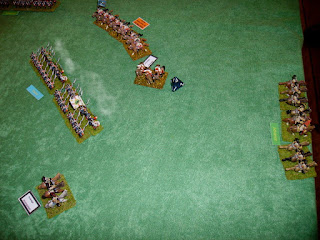 Wisely, the survivors of the wing retreated. 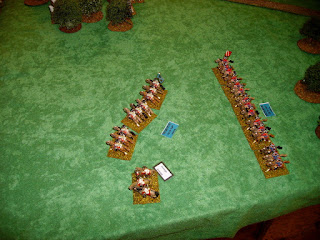 The vaunted French artillery was having a bad day, hitting nothing. 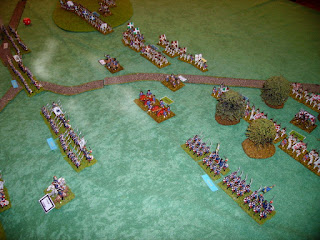 My rallied Kuirassiers on the left charged the massed French horse and broke them. 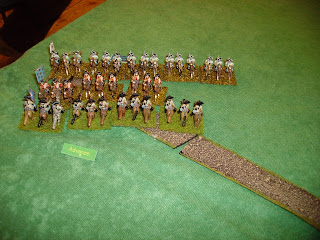 In the centre, the French infantry fired at my Grenadiers, but did negligible damage, the Grenadiers returned a crashing volley causing the French front line to flee. 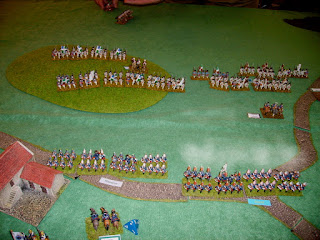 At this point, the French decided to concede the day! Some days you have the luck of the dice, and sometimes you don't! Today it was my turn!

I think we all enjoyed the game anyway!
Posted by Herkybird at 17:59