Phil (Norman D Landings) kindly did a write up of his Pig Wars games, so I publish this Batrep with the few pics I took over lunch...

Last Saturday, finding our numbers reduced by the twin revelations that some people work for a living, and some people have an actual social life, Ian and myself dusted off that horny-helmeted, swine-rustling classic: "Pig Wars".

We both fancied giving our vikings a run out, so the scenario would be two rival Norse longship crews cooperating/competing on a 'Strandhogg' raid.
We've become accustomed to larger scale skirmish, using Richard's 'Sword & dagger' club rules, so we decided to field larger warbands than usual, of thirty figures each. (twenty being the Pig Wars standard).
Ian shook things up a little with the inclusion of a mounted contingent - good move, as it turned out! 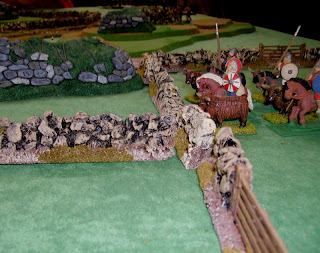 Our objective would be an Alban Scots farmstead, on a quiet tributary of the Abhainn Tuaidh.
Here, a  stonebuilt blackhouse, and a scattering of outbuildings and cottages in the older, Pictish style, sat clustered around a wooden bridge.
Buildings of this type would have a below-ground floor level, similar to A-frame houses,  so they sat up on natural low hillocks or constructed earth mounds.
Drystone walls enclosed the crop fields and  livestock pens, with their booty of 'muckle hairy coos'!
There were 20 victory points on the table - 17 from loot, one for taking your rival viking's standard, and one each for slaying the rival leader & the Scots chieftain in single combat.

I gave the Scots a token defence force, just to keep things interesting - a Chieftain, four veteran warriors, and eight lacklustre militia with spears & javelins.
We roped in an unsuspecting passer-by to position the defenders around the steading, and ran them on a very simple set of parameters: they would not act until they saw an enemy - they would attempt to form shieldwall whenever possible - and on the turn of a court card they would throw their javelins at long range, but on any other result would  withhold throwing until close range. 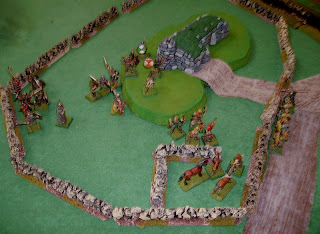 Cutting cards for our approach, Ian selected a long table edge, and I was randomly placed on one of the short edges.
The river separated our forces, so it looked like the initial rounds at least would be played out without inter-viking bloodshed!

I formed four groups with my forces, sending my archers to keep an eye on what Ian's force was up to, (and as a screen if he decided to turn his attentions to me) my spearmen heading straight for the largest group of defenders, and two groups of my best-armoured raiders accompanying my leader, making a bee-line for the main building, where the Scots chieftain awaited!

Ian did the exact opposite - he carefully avoided the defenders, sending his mounted men into the fields to round up the cattle, while the rest of his raiders moved towards the farm's outbuildings with felonious intent!

As we closed with the Scots,  my entire force became engaged one way or another. I had chosen the path of most resistance!

Seeing my spearmen approach, the Scots defenders formed a shieldwall on one of the hillocks.
My vikings faced off and formed their own wall, outnumbering the defenders two-to-one... should be a walkover, right?
As the shieldwalls closed, the Scots hurled their javelins, to little effect.  My grim-faced Norsemen reached the bottom of the slope... and their shieldwall collapsed into a mob of scrambling individuals as they climbed it.
I had completely forgotten that you can't maintain shieldwall formation while crossing rough ground!
That two yards of sloping earth gave the Scots a huge advantage. The vikings hurled themselves against the locked shields of the cowering peasant levy and their veteran leader, only to find themselves unable to break the line! 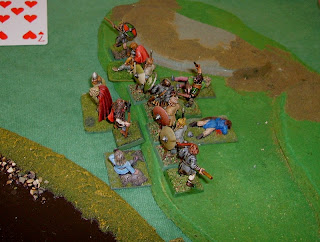 Both forces began to grind each other down in bloody attrition. 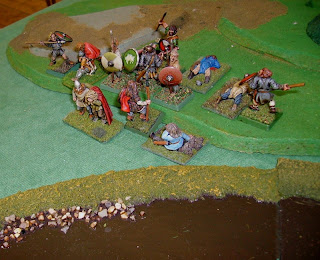 Meanwhile, my armoured veterans and their leader closed with the Scots chieftain.
In the finest tradition of Pig Wars, I challenged him to single combat... and, on the turn of a morale card, he accepted!
His warriors and mine stood by while both men stepped forward from the ranks. The Scot was already wounded - a hopeful shot by one of my archers as they passed had struck lucky.
Other than that, the fight was even - Elite quality combatants, with the same arms and armour.

This challenge turned out to be a huge mistake!
In search of one victory point from a single combat challenge, I was ignoring multiple victory points in the form of loot!  And I had turned almost half my force into spectators until the combat was over.
Which was not going to be soon! Both men hacked manfully at each other round after round, neither winning by a big enough margin to slay the other.

Meanwhile, Ian's viking-cowboys were gleefully driving off the cattle, the theme from 'Bonanza' ringing in their ears. 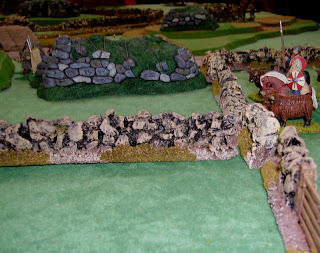 His standard flew unopposed in the middle of the village, while raiders dashed from building to building kicking in doors and dragging out the hapless civilians.
Soon, he had so much loot he started a cache at one end of the settlement!

Finally, the stubborn Scot fell beneath my Norseman's axe.
The victorious viking looked around the battlefield.
His spearmen's fight with the Scots shieldwall - with both sides drawing high morale cards and failing to break - had gone down to the last man.
And that last man... was  Scots! The  veteran warrior who'd led the militia!
With a parting gesture at the vikings, he took the high road.

(And so, flush with victory but out of a job, Macbeth went to see if King Duncan was hiring...)

In consolation, my archers had rounded up the Scots horses... but couldn't get them out of their enclosure.  The gateway was blocked by Ian's vikings, cheerfully waiting to relieve my raiders of their spoils. Didn't even give 'em a receipt. 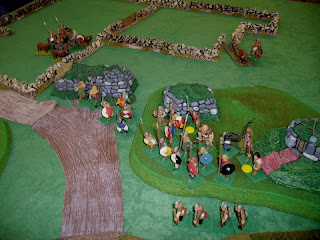 I had lost almost half my force, and didn't have a thing to show for it.
Having slain an enemy leader in single combat, my Norse captain would be a hero... a very poor, very unpopular hero.

Looking at the clock, we reckoned we could get another game in.
Cutting our forces down to a standard 20-man size to speed things up, we rebuilt he table, and got another passer-by to deploy the defenders.
This steading was a tougher nut, with less walled enclosures, and more walls positioned to defend the buildings.

Returning to the sheltered bend in the river where they'd moored their longships - far enough for safety, close enough to keep a watchful eye - the rival raiders heard exciting news from the ship-guards - scouting up a small stream, they'd found another farmstead.
Two Strandhoggs in one day... could it be done?

While Ian's force detailed men to load the livestock and guard the slaves, reducing his raiding force to 20, mine stripped the ship-guards to a minimum, increasing my force to 20!

Our second game proved much more evenly matched.
Cutting cards for choice of approach, we found ourselves on opposite long sides of the table, each facing some of the defenders.

Ian's men, for a welcome change, had the toughest fight. They faced off, shieldwall to shieldwall, against the largest group of Scots defenders.
The Scots had anchored one edge of their shieldwall against a wall, and the other against the slope of a hill, blocking a bottleneck.
It looked like a strong position. Ian's shieldwall closed with them, pinning them in place... at first it was a sobering lesson on how tough Pig Wars shieldwalls are, and several vikings went down in the press.
But then Ian's leader led a group of axemen up and over the hill, to tear into the defender's rear rank! Their shieldwall collapsed, and without it, the peasant levy were no match for Ian's Norsemen.

Meanwhile, my raiders had again made for the main building... and again, found it defended by the Scots chieftain!
Having learned their lesson, my vikings this time climbed the slope of the hill before forming their line.
But wait... did I say I'd learned my lesson?
Once we closed in, my leader couldn't resist challenging the Scots chieftain to single combat!
With a disastrous deuce on his morale card, the "wee, timorous beastie" hitched up his 'lang leine' and headed for the hills!

My leader's reputation was going through the roof!
(But that won't put herring on the smorgasbord.)

Settling down to the serious business of looting, we found ourselves on opposite sides of the stream... with equal VP's!

Our respective raiders eyed each other...

Ian had a solid core of warriors, including his leader, next to the bridge. He was confident that he could force a crossing and muscle me out of some VP's.

I had my archers facing the bridge, safe behind a stone wall. I was confident my main force could fall back, drawing Ian's leader on to his doom, while my archers peppered him every step of the way...

We looked at the clock, and decided there wasn't time to play that out.  In game terms, a blood-stained sun set, leaving the vikings no choice but to make their way back to the ships, each with a respectable haul of booty.

It was a thoroughly enjoyable session, with Ian a worthy winner.
Once again, the venerable Pig Wars proved itself foolproof, even against the most talented fools!
It rewarded sensible play when we played sensibly, and was entertainingly unpredictable when we took risks.
Posted by Herkybird at 19:29