Saturdays game (18th Feb) was a good game! - unfortunately, I was not terribly well and forgot my camera!
I got a new and supposedly better one at a local shop with 9.1 meg rather than my current 4 meg. (I had been planning to get a better camera for outside shooting in beautiful Northumberland etc anyway).
However got home and downloaded the pics, they ware all blurred and awful apart from ones I took at 5 foot or more! - So no pics of the actual game this week sadly! --Sorry!


Phil, one of our players saying 'Hi There!' 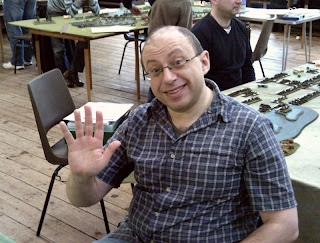 One of the 'Grande Armee' Napoleonics games on as well as us. 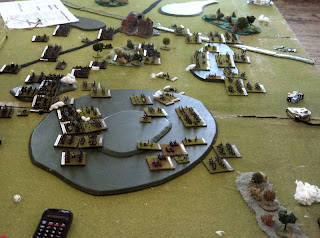 ..and an 'Empire' Napoleonic game. 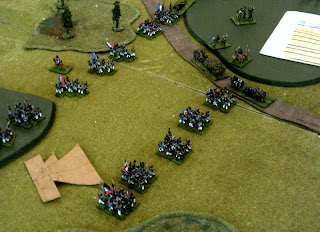 Of our game, only the 2 set up pics I took came out - with a blue tinge!
The objective of the game, a ruined house . 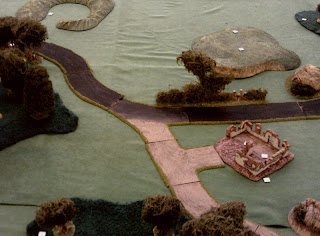 The markers showing the  possible positions of the German defenders! 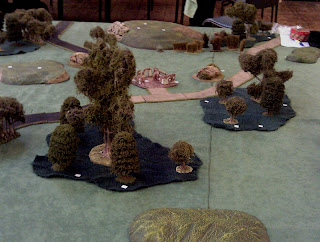 At around 10:20 gmt, 2nd platoon was detached to seize and hold a road junction being used to reinforce the recent German counterattacks. A Sherman tank was allocated for use in support of us in emergencies.
I moved my men in standard 'Arrow' formation across some fields where we came under fire from German infantry holding 2 woods to our front.
One of my NCOs was seriously injured early on, but despite 5 other casualties, the enemy were dislodged.
The platoon then occupied the woods and moved dispersed to the front edge, facing the ruined farmhouse.

Some of my men, at some distance from my position, spotted a Stug 3 hiding behind the house, they sent a runner to me, and I returned the runner with orders to assault the farmhouse when the Stug had been eliminated.
I then ordered my PIAT team up and summoned the Sherman.

Despite my orders, a private C Williams dashed across the open ground to the farmhouse with a gammon bomb, and despite being spotted by the Germans, and wounded by an MP40, he managed to damage the tracks of the vehicle with his bomb before retiring to safety. I respectfully recommend this man for a DSM.

Shortly after, his comrades in the 1st squad attempted to close assault the Stug, (my 2" mortar team belatedly attempting to give them protection with smoke rounds).
Despite losing a man to an MG40 burst as they advanced, they managed to board the tank and forced the crew to surrender.
Mention must be made of 3rd squads effective flanking rifle fire which had neutralised the enemy MG during this action.

The Sherman had been disabled by a Panzerfaust, and the PIAT team was badly placed, so the brave action by my squad leaders won us the objective.

All my men showed the greatest spirit and determination and should be commended.