The reconquest of England

This game is another 'What if' game, assuming the Germans had invaded jolly old England in 1940.

Our scenario supposes a platoon strength force of Fallschirmjager (paratroops) have seized a vital crossroads in Kent, and a hotch-potch force has been detailed to shift them! 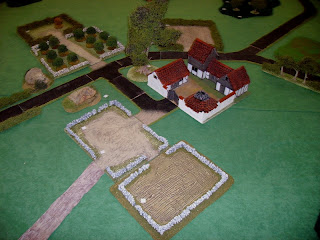 The battlefield objective was the road junction, and the overlooking farmhouse. 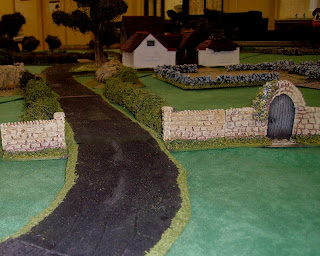 The British, a platoon of regulars, with an attached Vickers MMG and an A9 and A10 tank moved from their starting position in an estate. The farm looked undefended. 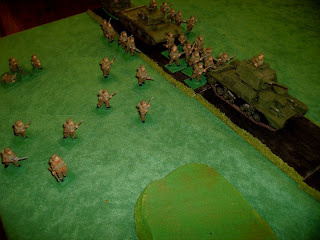 The main force, with the tanks, were detailed to advance down the road, while my section took the right. My job was to support the road attack. 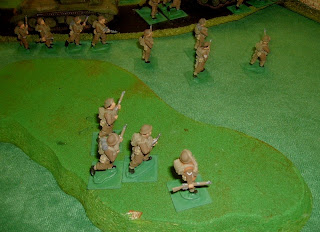 To this end, My men crossed a low ridge... 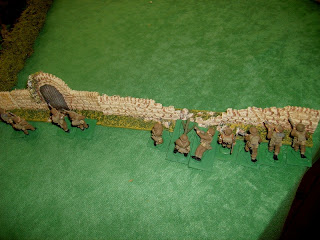 ..and, with the Vickers, set up behind the estate wall. 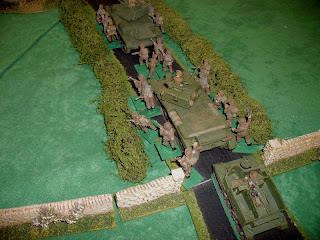 To my left, Ian's and Lawrences sections, with the tanks, passed through the estate gate. 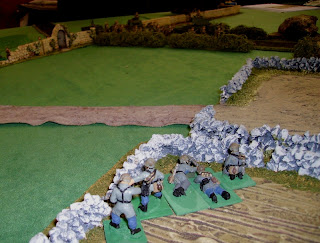 A small group of Germans in the farm fired at the road... 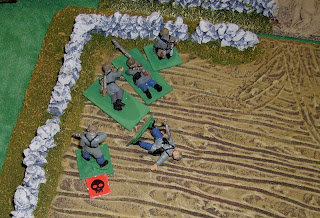 ..but my Bren team engaged them from behind the wall! 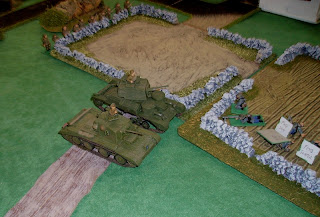 The tanks forged to the attack. 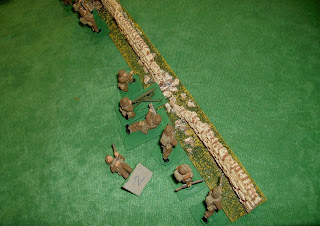 ..but not before the Germans disabled my Bren's No 2. 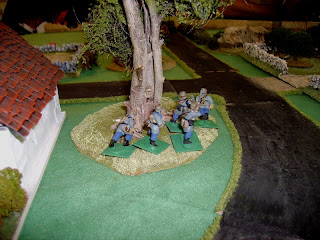 Another group of German infantry appeared at the other side of the farm. 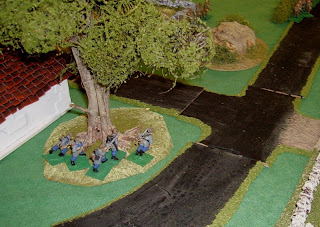 ..but failed to spot the approaching British on the road. 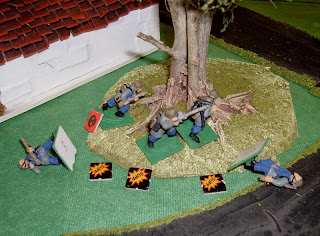 This group was ambushed by accurate rifle, light mortar and bren fire, and fled. 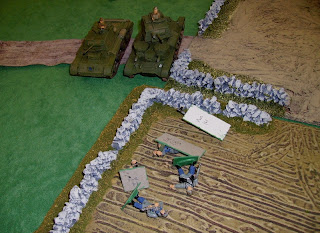 Back on my side the tanks finished off the Germans in the field. 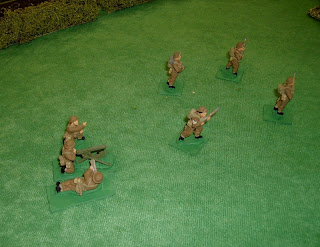 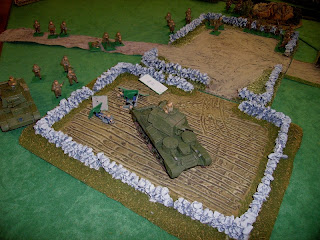 The tanks moved forward with my men in support.. 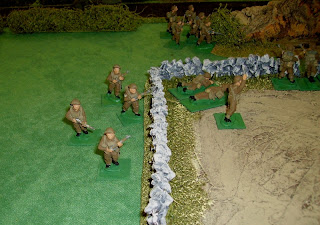 Ian's command group and followed after my men, and towards the farmhouse. 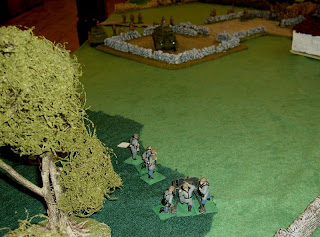 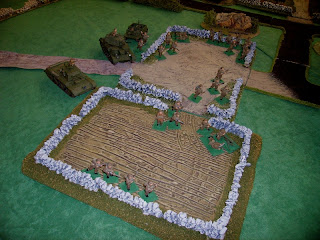 The tanks beat a hasty retreat, leaving the gun to the infantry. 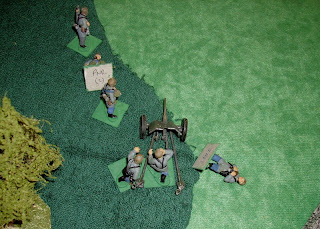 The gun crew, and their supporting troops began to take casualties... 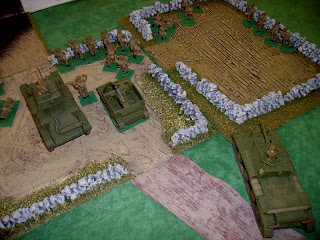 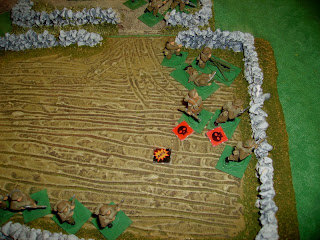 The Pak 36 fired at my Bren team, wounding and suppressing them. 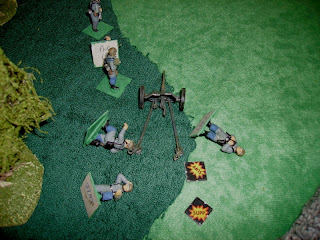 The Vickers and a the 2"mortar made short work of them. 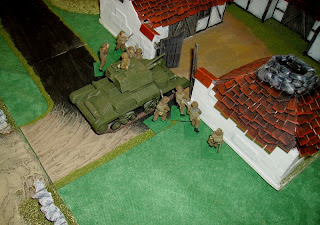 The British seized the deserted farmhouse. 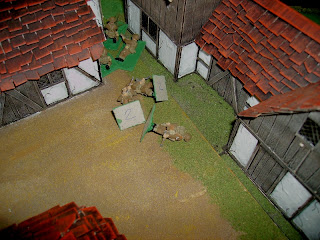 My men were detailed to hold the farmhouse, but as the Bren team took position in an upper window, they were wiped out by shooting from a nearby field. 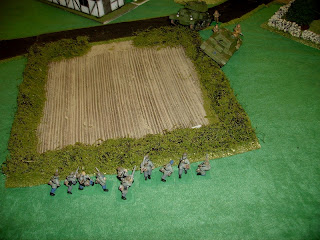 The tanks, and their supporting 2  squads drove the ambushing section back. 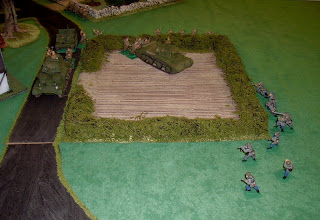 The Germans tried to fight their way past the farmhouse. 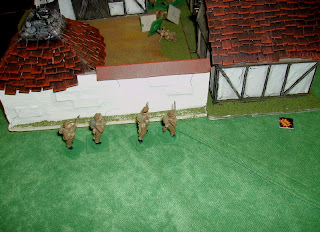 Their fire forced my men behind the farmhouse to fall back. 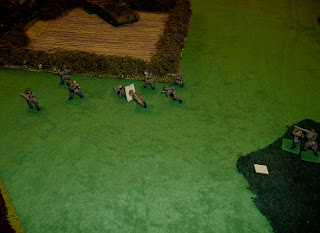 The Germans could not deal with the tanks, their MG 34 set up in a wood to cover them. 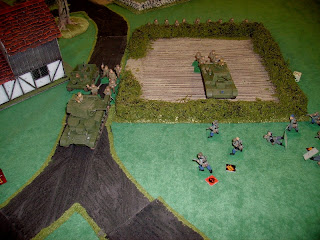 Faced with overwhelming strength, the remaining Germans beat a retreat.

This effectively ended the battle. I imagine in real life, we would have been soon under Stuka attack!
The Anti-tank rifle, flamethrower and infantry we had not met yet would have then probably caused us some problems!

We were lucky in the German dispositions, we had managed to engage them advantageously at almost every turn, and the unlucky miss by the A/T gun sealed the Germans fate.
It is very different fighting these early war actions, the lack of decent Infantry Anti-tank weapons can make even poxy tanks like the A9/A10 quite potent!

Good game, I must thank Ian for the use of his lovely BEF miniatures!, and Lawrence for his pictures- some of mine were blurred at critical points in the action!

Some more of our pictures can be seen on the club blog: Tyneside Wargames club blog